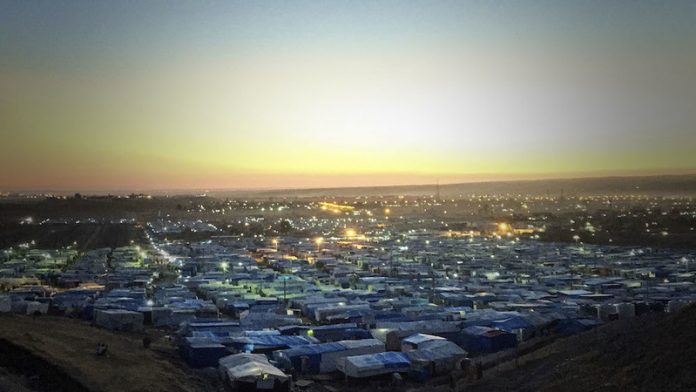 Bram arrived in Iraq just before Islamic State moved into the region and has been documenting the conflict ever since.

Call to arms: Rebels hand out weapons to volunteers to fight against the Islamic State and rescue the
Yazidi people stuck on Mount Sinjar (August 6 2014).

Your driver, a retired Peshmerga soldier, showed up at work one day with a Kalashnikov saying he would protect you. It seems the transition from everyday life to a state of war happened overnight.

This was the moment Isis [Islamic State] threatened to take Erbil, the capital of the Kurdish region of Iraq. It was a turning point in the war against Isis. Shortly thereafter the coalition forces were formed and started bombing the Islamic State territories. I told him to not bring the Kalashnikov to work as we don’t support carrying weapons while we’re on assignment. But it does say a lot about the moment. Everyone was scared and started carrying weapons.

Fathi herds his sheep on the frontline while mortars fly overhead (September 28 2014).

The Yazidi and Kurdish minorities in northern Iraq seemed to have very little to protect themselves against Islamic State. Has this changed? Was the siege of Mount Sinjar a turning point?

Many Yazidis picked up weapons and started fighting alongside the Kurdish forces after Sinjar was taken. Kurdish forces handed out Kalashnikovs to Yazidis. So they did play a role in breaking the siege of Mount Sinjar, but there’s only so much they can do. With old Kalashnikovs you can’t beat a force like Isis, which has advanced weapons. And a lot of them. So without the air strikes these Kurdish and Yazidi forces don’t have much to defend themselves. It’s very heroic if you think about it, to defend the frontline against this massive force with only light weapons.

Bakhtiyar has seen his business shoot up by 50% since Islamic State took over Mosul (February 25 2015).

Do many of the people in the Kawergosk refugee camp hope to return to their homes one day?

The people who don’t have money to leave for Europe obviously hope to return to their homes one day. The people in Kawergosk are from Syria. They have been living in the camp for over three years and, with no end in sight for the war, they’re losing hope. The ones that do have money all leave for Europe. In the camp itself people find ways to make money – start small shops, hair salons. The long-term camps start to become small villages. In some camps, people even build stone houses, saying the war in Syria won’t end anyway, so they might as well continue with their life in the camps.

Extremes: A boy cools himself in a camp outside the Kurdish city of Erbil. With temperatures of up
to 40°C, people in the tents suffer terribly from the heat (June 8 2015).

Which images challenge you the most?

Photographs of the internally displaced and refugees. It’s our duty to keep showing their situation and to not forget about them. So I like to show all aspects of living as a refugee, from the happy moments, children playing, to the misery they face every day. It’s important we keep giving the refugees faces. The news comes and goes but the refugees stay.

Children play in the snow near a refugee camp in the Kurdish region of Iraq (January 10 2015).

What do your friends and family think of you working in Iraq?

They’re used to it now. But I don’t tell much of the things I see and witness so they don’t have to worry too much. They read and see it from reports.

The violence in Cabo Delgado province by al-Shabaab (the youth) can be linked to jihadist influence, the continued marginalisation of Muslim people, and the lure of income from trafficking natural resources
Read more
Advertising