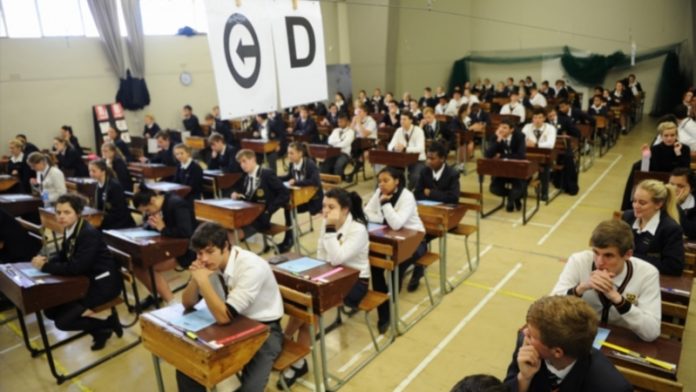 Of the 10 212 full-time pupils, 10 038 pupils passed, all of whom achieved a pass that is good enough to enter tertiary study at one of the three levels.

Outstanding achievers
Fifty-six pupils received outstanding achievements and ranked within the top 5% of all IEB pupils in six or more subjects and achieved 80% or more in life orientation. Of these pupils who received outstanding achievements, Logan Geldenhuys, of St John’s College, received an amazing 10 distinctions. Geldenhuys is “overjoyed that my hard work throughout the year has paid off and happy to have proven my potential to those who have always had faith in me”. He believes that his success can be attributed to his busy schedule which has taught him the value of efficiency and concentration. In addition to that, “I have been raised and schooled in an environment which values academic achievement”.

Commendable achievers
Furthermore, 78 pupils received commendable achievements and ranked within the top 5% of pupils in five subjects and achieved 80% or more in life orientation. Ro-ee Tal (below), of King David High School, Linksfield, with 10 distinctions and a commendable ranking, plans on studying in the United States next year. Proud parents, Nurit and Yossi Tal, believe that their guidance and support as well as effort they have made to Tal’s education has paid off.

Increase in learners
This year saw an increase of 236 additional learners that wrote the IEB examination, compared with 9 976 who wrote the examination in 2014. This increase is largely due to learners from 8 new institutions that have joined the IEB as well as from increases in learner numbers at existing schools.

This year, 48% of learners offered physical science of which 86% achieved 40% and above. The percentage scoring 40% and above in mathematics is 88.30%

Natasha Silverman (below) of King David High School, Linksfield, obtained 100% for mathematics and 99% for advanced programme mathematics. In addition to that she received 8 distinctions and an outstanding rating (top 5% in 6 subjects and over 80%  for life orientation) as well as top 1% in six subjects.

Silverman believes that matriculants should not feel guilty for taking a break. She feels that, “the key to success is maintaining a balance in your academic, social and physical life”. Silverman plans on studying Actuarial Science at Wits University.

Hard work, commitment and team work
IEB chief executive Anne Oberholzer said: “The IEB is proud of the achievements of the Class of 2015. Learners have again shown that with a commitment to hard work over their 12 years of schooling and supported by a dedicated cohort of teachers and parents, they have achieved the first major milestone in their learning careers.”

Advanced programme courses
Other results released by the IEB were the advanced programme (AP) courses. The IEB developed the Advanced Programme courses in Mathematics, English and Afrikaans, which is equivalent to the United Kingdom’s A level courses. AP courses are available to any learner in South Africa who chooses to participate regardless of attending an IEB or a state school.

This year saw an increase of approximately 18.5% of learners offering the advanced programme courses. There were 2 498 learners this year, a huge increase in comparison to 2 109 learners in 2013. Of the 2 498 learners, 1 298 come from IEB registered schools while the remainder come from state schools.

Follow your dreams
Principal Loraine Srage, of King David High School Linksfield, would like to, “congratulate all the matriculants on your own personal achievements. My best advise to you all would be to follow your dreams and never be afraid. You can all be whatever you want to be. I wish you all well for the coming year and for all your future successes”.

King David High School Linksfield has maintained its status as one of the top academic schools in the country for 2015, achieving a 100% pass rate, whilst three of their pupils achieved a commendable rating and six students an outstanding rating. In addition to this 15 of their pupils have been placed in the top 1% of their subjects.

The Combined Abitur-NSC qualification
This year’s results also included 51 candidates who received a Combined Abitur-NSC qualification, which means pupils can further their studies at either South African or German universities. German schools in Cape Town, Johannesburg and Pretoria offer this qualification. Five of the subjects taken are assessed by the IEB while the German education authorities assess seven subjects. The IEB sees its involvement with this qualification as a means of keeping South African pupils in touch with global standards and developments.

Advice to future matriculants
“Work effectively,” says Geldenhuys. “It is not about spending weeks in front of your books, but rather using the time you have to focus on what you need to do.”

Tal advises next years matriculants to “set your goals and then motivate yourself to actualise them. Once you are able to do that you will realise that despite how daunting your goals may be, you will be able to achieve them.”

Adult examinations?
Other results released by the IEB this year were the November National Adult Education examinations for the General Education and Training Certificate (GETC) qualification at NQF Level 1. This year saw a total of 1 464 candidates who wrote examinations across 8 subjects. These candidates are predominantly adult learners who are fully employed despite not being offered an opportunity to complete formal schooling with a recognised qualification. A number of employers must be thanked for providing such learners with an opportunity to study towards a recognised qualification.

Well wishes
Paul Edey, Headmaster of St John’s College, “wishes the matriculants of 2015 much success as they go forth into the next exciting phase of their lives”.

St Johns College achieved a 100% pass rate and a 100% bachelor degree pass rate, with a total of 338 subject distinctions.