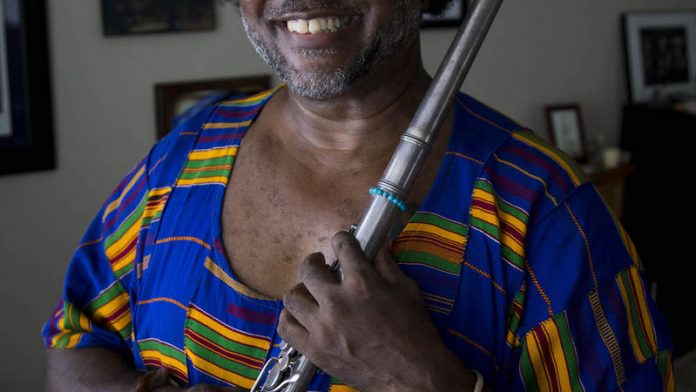 In 1962, the apartheid regime banned the sale of the Max Roach/Abbey Lincoln Freedom Now Suite: a direct response to the track Tears for Johannesburg, dedicated to the victims of the Sharpeville massacre. More than half a century later, tenor saxophonist Salim Washington is about to premiere Tears of Marikana, invoking what he calls a deliberate “poetic resonance” with the earlier work.

After the Marikana massacre, Washington, for the past three years professor of music at the University of KwaZulu-Natal (UKZN), believes “the same old thing is not enough; hipness is not enough” any more. “The prophetic voice is called for here.”

The three-movement Tears is one of two new works Washington will present during his performances at the Orbit in Johannesburg on January 22 and 23. The other is Imlilo (Fires), a reflection on xenophobia: “a dirge for what is lost in our collective souls when we allow the horrible violence of burning a human being to happen”.

The imperative of events was part of what told Washington that now was the time to record. The other part, he says, is “in four words: Dalisu Ndlazi, Nduduzo Makhathini. Dalisu is fearless and always puts his hipness and emotions into the music; Nduduzo never sacrifices soulfulness to show off his chops. They’ve both touched me musically and made me more able to be me. I don’t have to explain; they can intuit how to make my music better. That’s rare, and now that I’m experiencing it my music is coming alive in ways that I need to document.”

Reedmen are rarely so explicit about the debt they owe to rhythm players, but Washington is generous in acknowledging colleagues and influencers, including many South Africans.

As well as accolades for his current band, he recalls with admiration the legacy of the late saxophonist Duke Makasi. The late Zim Ngqawana, in whose bands they played, bequeathed to altoist Sharnick and drummer Sikade an understanding of “the connections between the consonant and dissonant sides of jazz expression”.

Working with trumpeter Mandla Mlangeni, Washington says, “is shaping my resolve in the direction my music is heading”, and drummer Tumi Mogorosi’s arrangements have influenced “the ways in which I’m using voices”.

“My music needs the human voice to point us more directly at the human dimensions of these events,” Washington says. As well as singers, there’s guest poet Lesego Rampolokeng — presenting newly commissioned words — who is “no derivative African-American wannabe but a true artist using his talent fearlessly to tell the truth, combining high artistry with his fire. Perfect for the project.”

It’s been a long journey for the tenorist from Detroit to Durban. Though his father was a preacher, the young Washington fell in with rather more streetwise peers around the age of 12, and was soon in a band, playing pop music on trumpet for restaurants and parties.

Two things changed that. “Detroit being what it was, someone jacked my brother and took my trumpet,” he reflects wryly. That prompted a transition to piano and later flute, “which quickly led me to the saxophone. It seemed able to bear the rather philosophical bent I was developing. One of my main influences was Rahsaan Roland Kirk, whose vision was performative, compositional, spiritual and political all at the same time.”

It was also Kirk who influenced Washington’s decision to play across the reed family: alongside saxophones, flute and oboe, he’s now exploring the sound of the bass clarinet.

As for the journey from pop to jazz, “a friend shared a John Coltrane LP. There was an example for me … Jazz allowed me to have the funky soulfulness of vernacular musics, to try to be cool in the nonsuperficial sense, but also to stretch intellectually and spiritually as both a musician and a person.”

His college years took Washington to Harvard, where he discovered his compositional muse, bassist Charles Mingus, and a new long-time political and musical collaborator, the late baritone saxophonist and composer Fred Ho, who died in 2014.

“We were political organisers on and off campus and this let me express the consciousness my parents had woken when I was still a boy. They always talked to us about our family’s history and the racial and class oppression we’d suffered and were still suffering. They didn’t have a Marxist analysis, but they were proud black people who taught us to be proud and never cower before white people or anyone.”

During Washington’s doctoral years, he taught and played music in church, schools and prisons and wrote for, played in and led various bands around Boston. A professorship at the Conservatory of Music at Brooklyn College brought him to New York and new collaborations. Work as a Fulbright specialist, which has taken him to many places including Colombia and China, the UKZN post and involvement with the Jazz Composers Orchestra Initiative have followed more recently.

He’s still combining academics and practical teaching. Founding the band Give It Horns with some of his students in Durban represents “a decision to teach in the old-fashioned way, by mentoring on the bandstand”. Bassist Ndlazi comes from that project.

Washington’s own sound and aesthetic thus draw on many sources: family and its history; his travels and collaborations; the playing of jazz radicals such as Coltrane, Kirk, Ho and more (“imagining the needs and outcomes of revolution”, he calls their music); as well as the traditions of popular African-American music and worship.

The reedman’s relish for collaboration with other art forms such as painting (he recently completed a commission inspired by painter Romare Bearden) and poetry “draws on the pageantry of the storefront churches in which I grew up and found the meaning of music … In the black pentecostal church, music was our world, our strength and our power. It presented the opportunity to transform our being. It left an indelible imprint on me in terms of not only what music is, but what it’s for.”

Because of this, Washington’s compositions speak simultaneously of the political and the intensely personal.

“When I saw the xenophobia images on TV, I couldn’t sleep,” he says. “The violence and carnage really bothered me. The next day came and I still couldn’t sleep. So I took my horn and tried just to let something out to allow me to come back to myself. That’s when the opening horn lines of Imlilo came.”