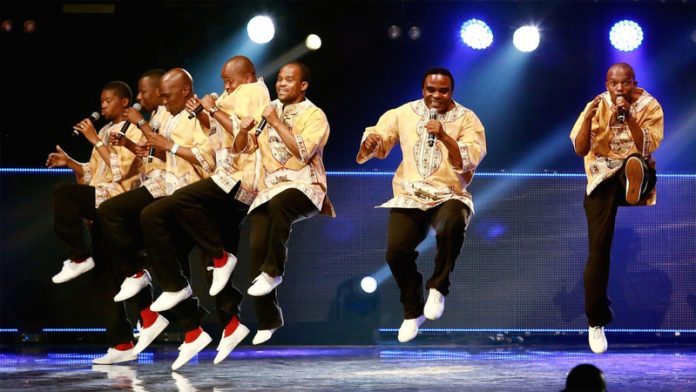 South African Grammy award-winning group Ladysmith Black Mambazo are back on the road, touring the United States in the month of January and February.

But even with their globetrotter’s lifestyle, the group look forward to performing in their home country, where fans sing along to their songs word for word. Their most recent show in South Africa was held last year November at Gold Reef City’s Lyric Theatre. Now we wait to see whether the group will bring home their fifth Grammy award.

Mambazo are nominated for a Grammy in the best world music album category for their album Music from Inala. This album consists of live music from the Inala – A Zulu Ballet production, which Mambazo performed along with dancers from Rambert and the Royal Ballet at the Edinburgh International Festival last August.

The last time that the group walked away with a Grammy was in 2013 for their album Singing For Peace Around The World. Mambazo joins South African musicians Wouter Kellerman and Neville D among those nominated for the prestigious music award in their respective categories. Winners will be announced on February 15 at the Staples Center in Los Angeles.

Mambazo is one of South Africa’s most successful groups. They’ve gained respect from all around the world – performing for a diverse audience. Some of their fans may not even understand their lyrics (which are mostly sung in isiZulu), but their style and harmonies prove that music – as cliché as it may sound – is in fact a universal language.  Their isicathamiya sound is incomparable.

This all-male a cappella singing group have been around since the 1960s and are still going strong. Fans will notice that Mambazo now feature some fresh faces, which has been Mambazo’s recipe for success and longevity in the music industry. The group, which was formed by former lead singer Joseph Shabalala, now consists of Shabalala’s sons, who’ve taken over the reins from their father.

Sons of previous group members have also joined the Mambazo family – ensuring that the legacy lives on. Like legendary 1960s South African all-female trio, the Mahotella Queens, Mambazo veterans are passing on the baton and taking the new generation under their wings. We won’t have these esteemed musicians performing for us for eternity, but it’s comforting to know the heart of their music will remain beating in those whom they’ve groomed.

What do you think of the current state of the isicathamiya genre in South Africa?
Thulani: Isicathamiya is music that was developed long time ago but amazingly enough, if you go to schools you’ll find that they still have competitions for isicathamiya music and there is a very big festival happening in Durban in September and October. There you’ll find people singing the very same music in halls. Isicathamiya is not going to die. It will improve like other music but it won’t die and young people still enjoy it.

Thamsanqa: Isicathamiya is sung in other countries outside of South Africa, countries such as Zimbabwe. Foreigners come to South Africa to do research on this music and when we go abroad they sing our songs for us. They embrace our music and that touches our hearts.

What do you think of the young talent?
Thulani: It’s amazing what young blood can do and the energy they put into their music. The music is constantly developing and it makes us happy to see the young people putting their hearts and souls into music because music is supposed to unify people and heal souls.

Do you think we as South Africans celebrate our indigenous music enough?
Thulani: Home is home; it will always be home and you are always welcomed at home but you mustn’t think that because people praise you outside, they’ll praise you at home. You are not supposed to be praised at home. When we are here [South Africa] we don’t need that celebration like we do outside of our country because we know that we were groomed here before the world knew us. South Africans made us. We are very happy about the people here [South Africa]; they love us more than anybody else in the world.

Can you tell me about your experience in the Inala – A Zulu Ballet production?
Thulani: It was a different experience and it was exhausting. It was a play where you needed to learn your lines and know your cues. We were singing and dancing – collaborating the Mambazo dance with ballet. There was a time when we all did the Mambazo dance and there was a time we try to do their [ballerinas] dance – except lifting up our legs.

Thamsanqa: But as we were dancing with them, we were also singing because we were the back-up singers.

Are you working on new music?
Thulani: We haven’t been in the studio because of our trips around the world. We haven’t set the time aside to record new songs. We have new songs but we think we might record them sometime in 2016. There is an upcoming album that we will release in the US but not in South Africa. It’s not new music but it’s a live version of a collaboration we did with our father.

For your upcoming album, will you stick with your Mambazo trademark sound or will you try out a different sound?
Thulani: This time we wish to stick to the Mambazo sound but we also welcome everyone who wants to collaborate with us. It’s not easy for us to change the sound because people are used to this sound. It’s our trademark.

Do you still go on tours with your father Joseph?
Thulani: He doesn’t tour with us anymore because he had a back surgery, which has made it very difficult for him to stand up for long periods.

Thamsanqa: He sometimes joins on stage to perform one song, if we are not too far from home. But if we are recording a song in the studio we make sure that we bring him along. When he gets there, he sits down and we bring the microphone closer to him so that he can sing. But there is no more dancing for him – just recording.

Would you like your sons to join the Mambazo group?
Thulani: Like our father would say, they are welcome to sing with us, as they have been doing already. They rehearse almost every day, when they are not at school, but we will not force them to join the group. We wish for them to carry the legacy forward.