The woman who guards Jo’burg’s streets 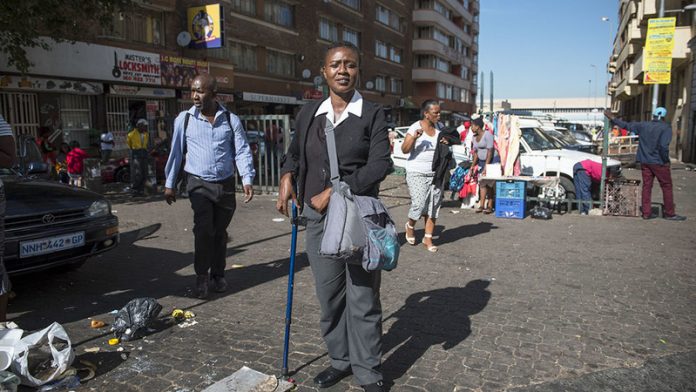 Everybody knows that she skips the queue to sit in the front seat of the taxi, heading to Daveyton, east of Johannesburg. She’s the lady with a leg and hand problem.

Tired after bustling through flashing green-amber-red lights and jostling elbows on the streets, she limps among them in her black uniform.

No one knows she stands apart. That she watches them, this sea of hopeful and weary souls.

Elizabeth Nonyone (39) works as a surveillance security officer, peering into the dark corners of central Johannesburg, guiding her cameras, sifting out the felons and irredeemably broken hearts, still addicted to the city’s allure of success.

A vignette of this daily soapie, her screen flashes the story of the sex worker giving birth on the pavement, using a nearby bin to abort.

She sees the violence of the mugger, the fear and trepidation in the newly arrived. Nonyane knows these characters well.

“I was 22, happily engaged, with a nine-month-old son, when I got my first stroke,” she said.

“I would lie in bed, looking at my son Tshepo crying for me to hold him but I couldn’t move.

“Things changed and one day ‘my husband’ looked me square in the eye and told me that I’m useless to him now.”

Nonyane was returned to her family, a reject, a broken piece of a whole. Months later, she heard that her estranged husband had paid lobolo for another woman.

For years, Nonyane was left incapacitated by her condition, wallowing in her sorrow. Things got worse when another stroke left her unable to hear or speak.

Slowly, painstakingly, she recovered her senses and, finally, her mobility.

Nonyane now acts as a guardian angel to those who tramp eGoli’s hard sidewalks.

Her estranged husband once returned, regretful, seeking to make amends.

No, she said. She was whole.