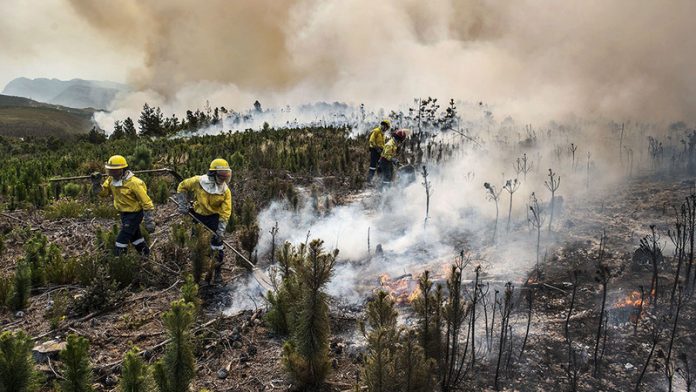 “I started out with nothing. No degree and no job, living in a small town where there was no hope for me,” says Christalene da Kella. Originally from Riversdal, her fortunes have changed since joining the Working on Fire programme.

“It took me out and gave me a place to work, and a chance to lift myself up,” she says.

She joined the local firefighting team so she could stay close to her parents, but with some training she was promoted to work in the Cape Town sector, where the fires are the worst in the country.

Teased for her small stature, she soon shut up her teammates by carrying more and hiking further than anyone else – teams often hike 15km up mountains to get behind a fire.

Her parents weren’t happy. “I had to phone my parents before every fire. They were so worried.”

Further training followed and she moved to a desk job – to her frustration. These days she uses her hands for emphasis, driving home points when talking to some of the 200 Working on Fire teams dotted around the country. Her emphasis is on ensuring people get training.

“We really can make people’s lives better, and how many jobs can be better than that?”

Her story is not unique in a sub-set of government programmes that have grown to have a huge footprint. At the 2015 State of the Nation address, President Jacob Zuma said: “Our environment programmes have created more than 30 000 work opportunities and aim to create more than 60 000 during the financial year. The environment department has been given R2.4-billion this financial year from the Expanded Public Works programme to achieve this target.”

The programmes that the department manages trace their heritage back to 1995, when then water minister Kader Asmal started the Working for Water programme. With a budget of R25-million, this had the twofold objective of creating jobs in areas that had little else in the way of industry, and providing the labour needed to clear out invasive plant species. Since then, more than a million hectares of wattle and other invasive species have been cleared – allowing more water to flow into South Africa’s rivers and dams.

The programme’s Christo Marais, says this started a series of environmental programmes: “Historically, conservation was considered a nice thing for the rich just to have. It was thought poor countries didn’t have the money. Working for Water showed a healthy environment can be the bread and butter of the poor.”

The success of the most dangerous of these programmes – Working on Fire – can be traced in the fires that do not happen. Lashers and controlled man-made fires clear strips to contain possible fires. When a fire does burst out of its constraints, the 25-member teams use beaters to smother flames while they cut paths to send them into a dead zone.

Their industrial yellow trucks – packed with firefighters in their blue pants, crisp yellow shirts and polished black shoes – crisscross the country as teams from different provinces support each other when the fire seasons start. Fitness is critical. To get into Working on Fire, a person has to do 40 push-ups, 40 sit-ups and run 2.4km in 12 minutes. They also need to pass a fitness test to ensure that asthmatics and people who shouldn’t be near a fire are kept out.

The programme’s firefighters conduct themselves with an almost foolhardy level of bravado, except they are trained to keep every situation under control. The Mail & Guardian spent a day with the Robi Hotshots team – based outside the small wine town of Robertson in the Western Cape – three years ago and has kept in contact with them since then.

In that hot February the whole Western Cape was on fire, with the team hunkering down in their rickety bunk beds after an exhausting 48-hour battle with one stubborn fire. The team were still shellshocked from fighting fires that swirled around them and on a few occasions cut off their escape routes.

The Working on Fire team in Robertson wait to be called out.

Albert Snyman, rubbing his wrinkled face, says some on the team only escaped by jumping into a dam.

“The fire boiled the water on the surface,” he says. A handful had to go to hospital to have minor burns treated. “It was the demon that came that day.”

The teams get regular counselling for this severity of incident. They also spend their days talking to each other and working through issues – while doing constant fitness drills. Snyman, like his peers, says the job has taken him away from a potentially troubled life.

“When you don’t have work there are so many paths you can take. Your friends do drugs and struggle to make it through. This – Working on Fire – gives you structure and something to work for.”

Many members of other “Working For” groups to whom the M&G has spoken share this conviction – that in these programmes they have found the opportunity to uplift themselves.

Patricia Molope, wearing the blue overalls of Working for Water, says that programme gave her “the only chance” to get out of her job on a farm and start working in the Free State town of Ficksburg. A shy woman, she moved away from her team members to talk about how she had finished high school since she started working. “The money isn’t much, but it gives you a chance to do better in your life.”

That money – the programmes started off paying people R35 an hour and now pay about R70 an hour – has come under sustained criticism over the years. The focus on numbers above all else has also drawn criticism.

Robert McCutcheon, a researcher on the expanded programme, says the overriding focus on the number of temporary job opportunities created has been to the detriment of training. “In the infrastructure component of the programme, nowhere near as much employment was generated per unit of expenditure as could have been achieved using proper labour-intensive methods.”

Where the wider Expanded Public Works Programme has a problem with numbers – only some 12% of its budget goes into salaries – the Working For programmes tend to be closer to the best practice goal of a 50% spend on salaries.

The effect of the Working For programmes has seen them hailed as best practice. Working for Water is used by the United Nations as an example of mixing ecological management with work creation in rural areas. It is replicated in South America and elsewhere in Africa.

For the dozens of people – wearing orange, blue or yellow uniforms – the programmes are often the only income supporting an extended family. Maria Shiluvani, a heavy-set truck driver for Working on Wetlands, says the few thousand rand a month feeds six people.

“I enjoy the work because I am making my province [Limpopo] more beautiful and, if I work harder, there is training so I can one day go and start my own business.”

Working on Fire: the firefighters that won’t quit

While most firefighters wait for blazes to come to them, the men and women of Working on Fire hike into the mountains, finding flames to put out.
Read more
Advertising