Sona 2016: A speech that failed to inspire 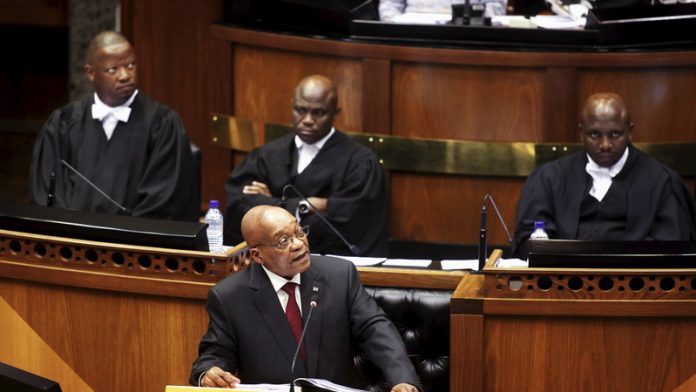 If it weren’t for the theatrics of opposition politicians like Cope and the Economic Freedom Fighters who were thrown out of Parliament, President Jacob Zuma’s State of the Nation address could safely be described as boring.

In a climate of general jumpiness, it’s better to play it safe. Surprises, especially bad ones, at a time like this aren’t all too wise.

But the EFF hold a record of sorts of being thrown out that they had to maintain. It took more than 60 minutes for that to happen last night, after the beginning of Zuma’s speech was punctuated by disruption by the opposition.

Much of the speech – which was safe rather than inspiring – was clearly meant to pacify anybody, from investors to the voters, to the ANC’s alliance partners, to the lowly commuters and foreigners he interacted with earlier this week at Marabastad.

Instead of arrogantly laughing his way through it – as he did last year – Zuma finally got his act together. His address was somewhat more statesmanlike and humble, crafted at creating the image that government cares.

The economy
Although he didn’t mention a word about his axing of former finance minister Nhlanhla Nene in December, as some parties had wanted him to, the president was clearly aiming to stabilise the economy and to pacify investors.

“We have heard the suggestions from the business community on how we can turn the situation around and put the economy back on a growth path. We have heard the points about the need to create the correct investment support infrastructure,” he said.

He also tried to put a positive spin on the exchange rate, saying it should be taken advantage of to boost inbound tourism, together with the recent revision in the visa regulations – which he promised would also be improved for migrants.

Belt-tightening, which was in past years left to the finance minister to explain and which hasn’t been taken seriously by all of government so far, was included in this year’s State of the Nation address.

Zuma repeated previously announced curbs on overseas trips, the sizes of delegations and restrictions of food and catering – including the Sona afterparty – but also suggested further cuts such as consolidating the capital of the country into one city, rather than maintaining the separate administrative and legislative capitals of Pretoria and Cape Town respectively.

There was also a move to appease the governing party’s partner Cosatu, by acknowledging that concerns about the Tax Amendment Act – signed into law by Zuma in December – had been heard. Minister in the Presidency Jeff Radebe has already been delegated to look into the matter.

Zuma made mention of university fees in his speech, with no new announcements from the task team that he’d already announced. However, he warned that the zero percent fee increase had budget constraints that would be addressed by Finance Minister Pravin Gordhan in his budget speech in two weeks’ time.

On health, Zuma announced that a state-owned pharmaceutical company, Ketlaphela, had been established to help participate in the supply of anti-retroviral drugs to the department of health in the next financial year.

He gave an update on government’s nine-point plan to respond to sluggish economic growth, but admitted that the country’s growth would be slow at less than 1%, which would also affect its ability to raise revenue.

Another important issue that he flagged – arising from the ANC’s January 8 statement – was the fight against racism. Zuma declared that Human Rights Day on March 21 would be commemorated as the national day against racism this year.

There wasn’t much mention of an election campaign in this year’s speech, other than urging over-18s to register to vote.

All in all Zuma delivered a speech that offended nobody, but judging from the reactions of ANC and opposition MPs alike, it didn’t fully please anybody either.