District Six fails to rise from the ashes of apartheid 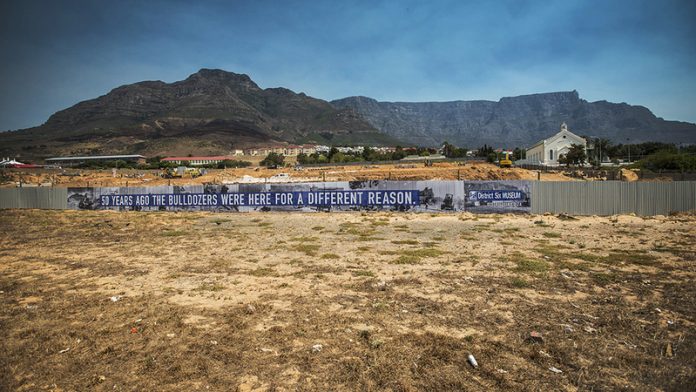 The legend of District Six is not just the land standing empty on the foothills of Table Mountain, violently separating the wealthy white population of the city from the poorer people of colour. It is the children growing up in the ghettos of the Cape Flats, the thousands of elderly people struggling through bureaucratic administrative processes to get a home in the suburb they were forcefully evicted from, and a complicated spiderweb of power – private and public entities, none of whom appear to want to take responsibility for the mess that muddies the restitution of the once vibrant inner-city district.

Fifty years since District Six was named a whites-only area under the Group Areas Act of 1950 on February 11 1966 and the more than 60 000 residents were forced to leave, their homes and businesses destroyed, along with their neighbourly spirit, only 135 homes have been built in the area.

Development and encroachment on the land continues, with only 42 hectares available for restitution in an area that was initially 150 hectares. And as long as District Six is not legally declared a national heritage site by the South African Heritage Resources Agency, it remains vulnerable and unprotected.

For the many people who are still waiting two decades for their homes since making their claims, it’s not just about land and houses, but something they will never get back – the tight-knit and dynamic community spirit of District Six.

For Mymoena Jacobs of Bonteheuwel, what she misses most is not a home, but the safety and neighbourliness of the area. In the house she was sent to under the Group Areas Act and where she lives with her daughter and grandson, she cries as she talks about how she is afraid to walk to the shops for fear of getting hit by a stray bullet, the long and expensive trips to the city, the many conversations she has with her teenage grandson to keep him away from gangsterism, or to be careful on his way to mosque on a Friday, where gang shoot-outs sometimes take place in the street outside the place of worship.

Mymoena Jacobs in her home in Bonteheuwel weeps while talking about her old home and life in District Six. (David Harrison, M&G)

Bonteheuwel was one of the ghettos on the Cape Flats created for the people of District Six by the apartheid government between 1966 and 1982. Shahied Ajam, director of the District Six Working Committee, says: “The social evils affecting our people today can be attributed to the apartheid legacy, where gangs and drugs are a direct result of people being dispossessed … and having to defend their territory.”

Jacobs has resigned herself to the idea that getting a home “will only happen when it happens” – and only when the powers that be decide.

The overlap of responsibility is what makes it easy to get away with the misuse of the land.

An example of this is a continuing news item since 2014 – the ongoing construction of the Sandenberg Residence by the technology university at the end of what was once Hanover Street, the throbbing central artery of District Six.

The construction has been slammed by prominent actors such as Judge Siraj Desai, who was once chairperson of the technology university’s council. He says the institution must be “oblivious” to the sensitivity and history of the land.

But the university maintains that it has done no wrong, and that the construction is its rightful choice.

A sad reminder of the once lively District Six community before apartheid. (Gallo)

The spokesperson for the university, Lauren Kansley, says that “although [the university] has the right to build on land to which it has title … [it] always exercised this right with caution precisely because of the historical significance of the site. Consultation with District Six stakeholders remains an integral part of how we communicate on this issue.” Kansley could not confirm how much land is owned by the university.

However, there was no consultation whatsoever with significant stakeholders such as the District Six Working Committee and the District Six Museum, two of the central parties involved in protecting the area and pushing for the rightful restitution of the land.

Bonita Bennett, the director of the museum, was surprised to see construction begin in mid-2014 without any consultation or communication from the technology university.

So who is responsible?

But even though the question of restitution is immediately directed by the City of Cape Town to the department of rural development and land reform, the construction of the university residence was well known by all parties, says Ian Neilson, the city’s executive deputy mayor. “It has been a matter of public record since 2010, and it was not on land that was considered to be part of that set aside for restitution.”

But according to Bennett, although the university technically owns the land, the residence infringes on land simultaneously set aside for heritage protection by the draft development framework created by the District Six Reference Group initiated by the minister of rural development and land reform, Gugile Nkwinti.

The reference group was formed in 2012 to ensure President Jacob Zuma’s demand that all District Six claimants could return to their homes by the end of 2014.

It was more surprising, says Ajam, because the construction started two months after the university and the City of Cape Town co-hosted a sod-turning ceremony to mark the beginning of phase three of the restitution process in May 2014, in which 108 houses would be built.

Two months before the ceremony, Nkwinti had promised that construction of the 108 houses would start within a few weeks, but construction has not yet begun.

These empty promises and the lack of accountability delay the housing process and affect the claimants, who can do little but wait.

Catherine Wagner (91) and her husband Cyril (92), who live in Elsies River, have been waiting for a house in District Six for 15 years since they lodged their claim and are split on their dream of returning to a new home in the area.

Catherine Wagner remains calm as she speaks, hopeful and with faith that she will enter a new house in District Six before she dies. But her husband, who is clearly very angry, believes that it is optimistic people like his wife that the government manipulates into believing they are doing good work.

“I will not believe I am getting a house until I walk in through the gate,” he says.

“We were not kicked out,” he emphasises, “we left peacefully.”

Of course he is angry, he says, but the couple left because they knew that fighting would get them nowhere. “That was the apartheid government. When that government said we had to move, we had to move.”

The couple’s co-operation meant that they could choose from some of the more convenient areas with the biggest houses, and they chose Silvertown in Athlone. Those families that resisted were sent to the furthest and now poorest parts of the Cape Flats as punishment.

Hope is getting slimmer. Two weeks ago, the department of rural development and land reform told Parliament that 123 571 new claims nationwide had been lodged in the reopened land claims process since March 2013.

Ruth Hall, a professor at the University of the Western Cape’s Institute for Poverty, Land and Agrarian Studies, said in a parliamentary briefing that, based on the track record of the land claims commission and the forecasts, it would take 144 years to resolve all the claims. She estimates there will be more than 370 000 land claims lodged between now and the cut-off date of 2019. For Cyril Wagner it may be unfortunately true that the only government home he will get is “in the Maitland cemetery”.