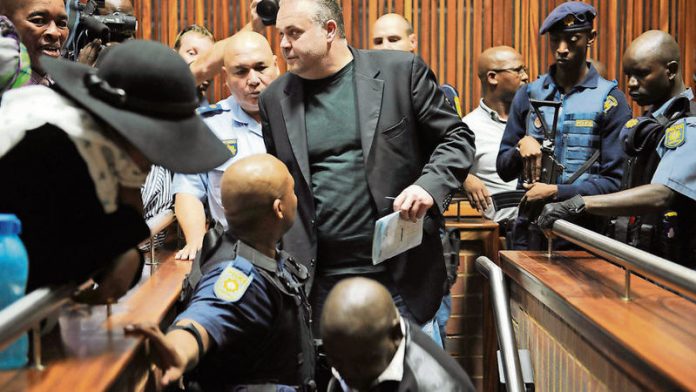 The sentencing of alleged gang boss Radovan Krejcir and five others was disrupted this afternoon when the Johannesburg high court was evacuated after a bomb threat.

amaBhungane believes the Gauteng judge president, Dunstan Mlambo, received information of a threat on the phone at about 2pm. It is believed that the threat was specifically aimed at the sixth floor of the court building, where the Krecjir case is being heard, although this could not be officially confirmed.

A tactical response team official rushed into courtroom 6E and informed the prosecutor, advocate Louis Mashiane, of the security threat.

Presiding judge Collin Lamont quickly adjourned the case, leaving the courtroom even before the six accused left the stand: He usually waits for them to exit the court first.

Courtroom 6E was combed by a dog from the police canine unit shortly after the building was evacuated. It has been six months since Krejcir, Sandton businessman Desai Luphondo, KwaZulu-Natal taxi owner Siboniso Miya and three police warrant officers were found guilty of kidnapping and attempted murder.