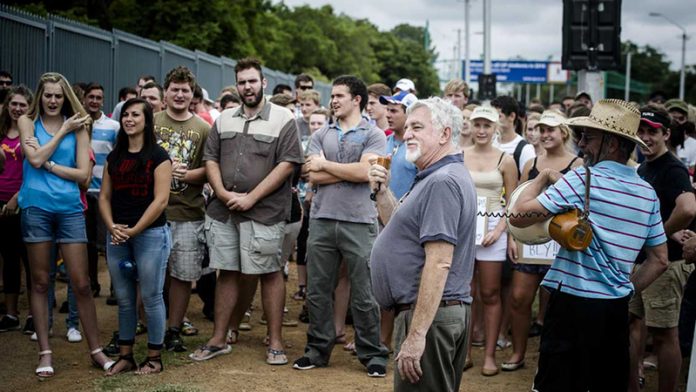 An Afrikaner survivalist group, which calls for self-determination, has backed protests at the University of Pretoria, determined to protect “their” university and language.

This week lectures continued without disruption at the university, in contrast to the passionate protests last month, when the right-wing Kommandokorps joined students protesting in support of retaining Afrikaans as a medium of instruction.

Franz Jooste, a “colonel” in the Kommandokorps, and other “officers” were photographed at the #AfrikaansSalBly protests.

He believes that students (most of whom are black) calling for English to be the only medium of instruction are a danger to Afrikaners.

In 2012, the Mail & Guardian published a report detailing how the Kommandokorps taught teenagers in a paramilitary camp that black people are inferior to them.

Jooste believes that black people should be separated from them.

“Nowhere in the world has it worked that people coexist. It’s better for people to be independent, to have their own countries, to have sovereignty over their own people,” he added.

During his visit to the university, Jooste spent the day talking to the #AfrikaansSalBly students, a group of about 200 students, he said. He advised students that the “onslaught” from #AfrikaansMustFall protesters is a threat to their “very existence”.

But activists in the UPrising movement, which is advocating a change to the university’s language policy, are confused by Jooste’s remarks.

Reitumetse Ratlhogo, 22, is a founding member of UPrising and says the movement is fighting for equality.

“What we’re saying is, first, the institution must be representative of the demographics of the country. When we talk about a culture that is accommodating, it is accommodative of everyone. We’re obviously talking about multiculturalism,” Ratlhogo said.

The mechanical engineering student says Afrikaner culture dominates the university to such an extent that students in residence are forced to call their seniors “oom” and “tannie”, and most of the res songs are in Afrikaans.

Although the university provides lectures in English and Afrikaans modules, the teaching in Afrikaans classes is better, Ratlhogo says, because the classes are smaller and lecturers are teaching in their mother tongue.

“There’s instances where you feel like some people are superior and some are not because of the way the language is used at the institution,” Ratlhogo said. “In an English class, you have all ethnicities. If we’re in class … we find ourselves sitting on the floor at times, so it’s very hard to have that individual attention with the teacher.”

Afriforum Youth, which has members at the university, share at least one objective with the Kommandokorps – Afrikaans must remain a medium of instruction.

But the group has distanced itself from the Kommandokorps, as its mother organisation has done in the past, and says that students should pave their own way with management to make more languages available.

“Everyone must have a chance to study in their mother tongue. I believe it’s the responsibility of the students to go to management and to take part in discussions with management regarding the language policy and regarding language in general,” said Morné Mostert, the national project co-ordinator of Afriforum Youth and a student at the university.

“If other organisations want to do it in another manner, that is their choice,” he added. “We distance ourselves from the Kommandokorps; we have no relation to each other.”

For UPrising, removing Afrikaans as a medium of instruction would put every student who is not English-speaking on an equal footing, because they would all have to compromise and learn in English.

“We would love all 11 official languages to be present at the university and everyone to all have classes in our 11 official languages. However, it’s economically not viable and it’s time strenuous – there wouldn’t be enough hours in a day to have all lectures in all 11 languages,” Ratlhogo said.

Jooste says he is still in contact with students at the university.

Photographs with the apartheid flag appear all over the Kommandokorp’s website, and on the leading page there’s a barometer that measures the danger level for Afrikaners.

Currently, the barometer is lingering just short of red, when there will be “war, whites are killed in mass attacks, raped and robbed”.

Classes have returned to normal at the university, with students, management and Afriforum Youth negotiating an end to the last round of protests.

According to Ratlhogo, students are capable of determining how to handle their protests without external influences.

“As students, we are intellectual, we’re academic, we can come to amicable solutions,” she said.

“Once you have external parties who are bringing in their influence from wherever, you are getting commands to attack or whatever. Then it becomes a problem,” Rathlogo said.