Whiteness, not Afrikaans, must fall 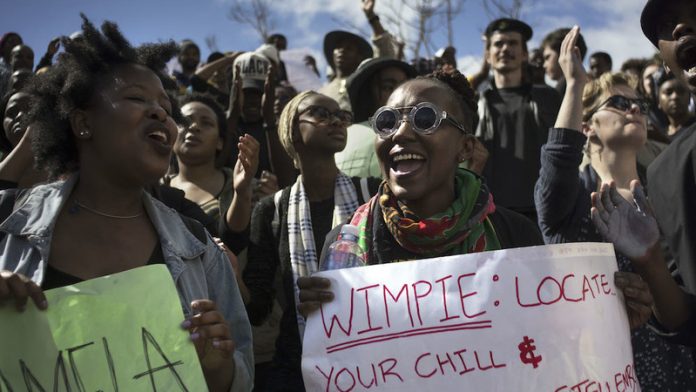 There are towns in South Africa where the apartheid nostalgia is so tangible that you can see and feel it everywhere.

It eats away at the tar on the road and peels the paint off the houses. You are blinded by the sun reflecting off the zinc houses a few kilometres from the small mine that employs most of the residents and those from surrounding villages. You smell the hectares of fields stocked with sunflowers, maize and wheat. You are left anxious when you are lost on Voortrekkerlaan or HF Verwoerd Road in the middle of the night. Nobody tells you that you should not be there; you just feel it in the air.

In many cases, these towns are populated with a certain type of Afrikaans-speaking white South African who is intolerant and racist to black people in the most subtle of ways. There are many towns like this. Some of them are even home to university campuses, like Stellenbosch, Bloemfontein and Potchefstroom.

What happens when a university community is embedded in places where there is a relentless clutching on to a warped idea of whiteness that is deeply rooted in the preservation and celebration of one group of people at the cost of others’ humanity?

For the past year, we have seen a rejection of these subtle but tangible forms of oppression that black students have faced at the institutions that continue to teach in Afrikaans.

It is the third-most widely spoken language in South Africa, mostly by coloured people, who have also been systemically marginalised in this country. But Afrikaans still functions as a tool of whiteness, used to discriminate against and exclude those who are not white Afrikaners, and this is why #AfrikaansMustFall has been the demand of protesting students at dual-language institutions such as the Free State and North West universities.

It is for this reason that, judging by our four-day finance minister Des van Rooyen’s name, many assumed that he was a white man.

For a long time my stance on Afrikaans as a medium of instruction in universities has been firm: it should be scrapped because of reasons that many others have mentioned before. In last week’s Mail & Guardian, Nic Spaull and Debra Shepherd wrote that “only 14% of black African students who qualify for university took any Afrikaans at school. We cannot see how excluding 86% of black students from accessing Stellenbosch University is fair, given our apartheid history, or how the university will become more representative of the country without transforming its language policy.”

In Luister, a documentary about the racism black students face at Stellenbosch University, one recalls white Afrikaners telling him: “If you don’t speak Afrikaans, you don’t belong here.”

The experiences of black students featured in the documentary viscerally show how Afrikaans can be used to discriminate against, hate and abuse others. ?But what about black students who can and want to learn in Afrikaans?

It was not until I went to North West University’s Potchefstroom campus, where I met black students who speak Afrikaans and wanted to study in Afrikaans, that I realised that doing away with the language would be to the detriment of black students who are excluded in other ways at these institutions.

As a black student at NWU in Potchefstroom who studies in Afrikaans, Grantham Jonkers does not see this as a privilege. Afrikaans is his home language and it was the medium of instruction throughout his schooling. Although he wants Afrikaans to stay, he still feels excluded by the culture.

“I see Afrikaans as a language that I speak. I am still black and, because I do not embrace white Afrikaner culture in the same way, I will still be discriminated against. I am aware that I am in a better position than my black friends who don’t speak Afrikaans at all.”

During apartheid, Afrikaans was the language of the oppressor, who was white, and it continues to evoke the same sentiments when it is used to promote whiteness and its culture. The standardisation of Afrikaans denigrates the dialect of many coloured people and exalts white people’s Afrikaans; referring to it as suiwer (pure) Afrikaans also contributes to how the language remains perceived as white.

When we, as black people, are in Lichtenburg, Ventersdorp, Musina or Standerton, where the language and culture of Afrikaners function to remind us that we don’t belong, we also say #AfrikaansMustFall.

Whiteness has appropriated Afrikaans and it has become hard to draw the line between it as a language that is mainly spoken by people who are not white and the culture that often works to exclude others.

The Afrikaans language is not the problem; whiteness as a social construct is. Just as we accept that white privilege exists and understand how it functions in the white supremacist, capitalist world we live in, so we must acknowledge that whiteness functions in the same way when it comes to Afrikaans.

Until Afrikaans can free itself of whiteness, the call for the fall of Afrikaans will continue.