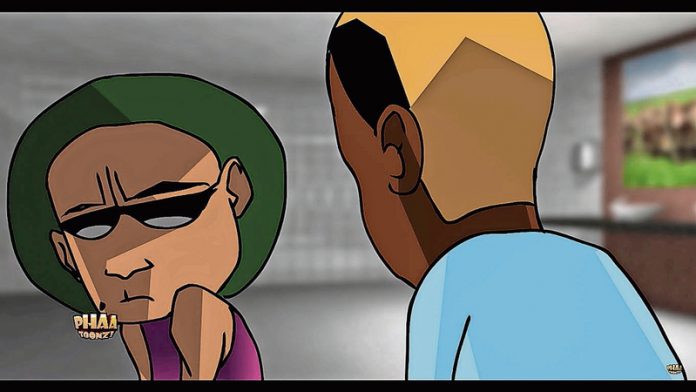 From hip-hop star Cassper Nyovest using his ponytail as a rotor blade to Riky Rick running away from the police, the online series Kronikles of Hip-Hop uses comic animation ingeniously to parody South Africa’s hip-hop scene.

You can view the series on the Phaa Toonz channel on YouTube, where new episodes of the web series are regularly uploaded.

Phaa Toonz occupies a burgeoning space in local online entertainment, which was first popularised by the local Sepedi series Noko Mashaba, which has been viewed more than a million times. Phaa Toonz has positioned itself as a platform that offers a humorous overview of the local hip-hop scene.

Hip-hop artist KO (Ntokozo Mdluli) provided the animators with material for the Kronikles series. The rapper was the initial character focus for the Phaa Toonz creators but they soon realised the content opportunities in shifting the focus to general commentary on the local hip-hop industry.

He and his team have ruffled a few feathers with some episodes, but have managed to make fans out of the personalities they often mock.

They recently collaborated with Motswako rapper Khuli Chana to create an animation video for his new single Respek.

The video was released in February and the official video for the song, which also features work by Phaa Toonz, will be out before the end of March.

Another big Phaa Toonz fan is rapper Cassper Nyovest, who stars in Kronikles of Hip-Hop as a caricature of himself. Mpehle says Nyovest used some of their footage during his stage performances.

Nyovest and hip-hop star AKA’s rivalry has become a regular topic in local hip-hop. The rivalry inspired a Phaa Toonz video where the rappers are held hostage and have to work together in order to escape.

They eventually set aside their differences, kiss and make up, and the video ends with the phrase “hip-hop wins”.

Despite being immersed in hip-hop culture, Mpehle doesn’t want the company to be limited to this genre and subject matter.

Phaa Toonz has another music project in the works, Isikhathi sa mapopayi, and Mphe-hle’s greater goal is to own a TV channel.

“We want to come up with Africa’s very own cartoon network,” he says.

Mpehle never considered animation as a career until his high school teacher at the National School of the Arts in Johannesburg told him about the animation courses available.

It took a serious car accident in 2007 for Mpehle to tap into his illustration skills.

He was stuck at home for two months, unable to attend school because of his severe injuries. During that time, he turned to comics as an outlet for self-expression. He created four comic books in two months and showed them to friends. The positive feedback he received prompted him to create Phaa Toonz in 2007 with three of his peers.

“I noticed that there were no black- owned animation companies that were specifically making animation for South Africa,” he says. “We were coming into the industry with ­something fresh.”

For Mpehle, the local animation industry is fairly young, which means there is enough room for more ­creative projects. The next stop for Phaa Toonz is to create a feature film inspired by the Kronikles of Hip-Hop series. And for now, their attention will be focused on infiltrating more platforms and shaking things up in the local entertainment industry.