Go, Wayde, mom’s right behind you 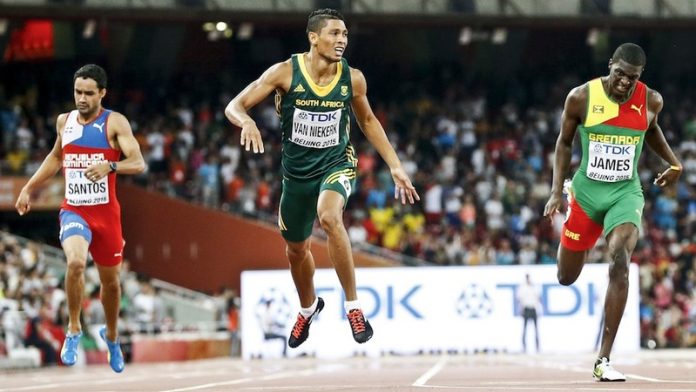 The mother of South Africa’s current athletics star, Wayde van Niekerk, doesn’t remember her ­personal bests. But she does recall coming first in the under-14 100m and 200m at the Athlone Stadium in Cape Town.

This is probably the occasion Clement du Plessis – profiling Swarts on athleticsclipboard.co.za – refers to when he writes: “During [apartheid-era] sports isolation, Swarts set Athlone Stadium on fire with her sizzling-hot performances in the 100m and 200m. She blazed to provincial records in both the 100m and 200m on the grass track – against Cape Town’s infamous southeaster, a strong wind that blows away the city’s smog during the summer months.”

Du Plessis goes on to detail the former athlete’s achievements: “Following her top-notch performances at the interschools and champ of champs meetings, Odessa ran through the Western Province schools team, clubs and South African schools and clubs, mercilessly setting records in the 100m and 200m. Only the weather elements and the record books were her rivals – an absolutely dominant sprinter. By the time Swarts quit athletics, and South Africa entered democracy, she held more than six sprint records spread across high schools and clubs at both provincial and national levels.”

These days, Swarts (42) works as an athletics coach at a primary school in Bloemfontein.

The past few days have been somewhat bittersweet for her. Last weekend her 23-year-old son made athletics history when he clocked 9.98 seconds, qualifying for the 100m sprint at the 2016 Rio Olympics Games. He also became the first man to run three separate races in record time – the 100m in under 10 seconds, the 200m in under 20 seconds and the 400m in under 44 seconds.

Swarts is naturally overjoyed about Van Niekerk’s feat, but those emotions have been somewhat marred by several comments she’s read on social media platforms such as Facebook and Twitter.

“Most of the public post incorrect information on social media saying that Wayde is not being acknow-ledged because he’s coloured,” she says. “I don’t like that. Within half an hour of me tweeting that he ran sub-10, so many tweets starting coming in to me congratulating him. If the public knew how many media people contacted us, they wouldn’t make things up and post them randomly.

“People are making it a race thing – this puts a dampener on his achievements,” she adds.

These achievements are many. Last August, Van Niekerk won the men’s 400m final at the International Association of Athletics Federations World Championships in Beijing, speeding to the finishing line in 43.48 seconds. He was also the silver medallist in the 400m at the 2014 Commonwealth Games.

He currently holds the South African 400m men’s record and is the first African athlete to run the 400m in under 44 seconds.

When he won gold in Beijing last year, some writers lamented the fact that his mother had never had the opportunity to represent South Africa as an athlete, and described his victory as a retribution of sorts for her.

But Swarts dismisses this as irrelevant. For starters, she never had any aspirations to represent South Africa, she says.

“We were never exposed to [the concept of] international competition. We were always looking towards working for a place in the SAAAB [South African Amateur Athletics Board] team. I wasn’t fazed about getting to the national team. We didn’t have role models like Wayde van Niekerk so that we could think, like: ‘Wow, here’s a coloured guy, we can be like him.’”

Besides, she says, her son’s achievements are his own.

“My child has achieved everything on his own. It’s their [our children’s] talent, it’s their hard work, their ambition. But we want to force our kids to be 100m athletes because we were 100m athletes? That’s nonsense. We are supposed to respect our children’s wishes. There’s a difference between cheering your child and forcing him to do your best as opposed to his best.”

After his Beijing victory, Van Niekerk lamented the fact that his family wasn’t there to share the moment. He’s a humble, shy, sensitive person who always puts his family and friends first, says Swarts, and being a close-knit family has meant that she and her husband Steven Swarts (Van Niekerk’s stepfather) have always tried to be present when their children are participating in an activity.

They couldn’t make it to Beijing but they will be in Brazil later this year, backing him at the Olympic Games.

“Whether I’m at the stadium, or outside, when he’s done I want to be there to celebrate with him,” she says excitedly.

How sure is she that there will be cause to celebrate?

“I personally feel he has a big chance of winning gold. Last weekend he caught us off guard. The night before he told us he’d be happy to run just over 10 seconds. When he ran that time [9.98 seconds], he was stunned. That proved to me he’s ready for the Olympics.”