We got ourselves into this sordid mess 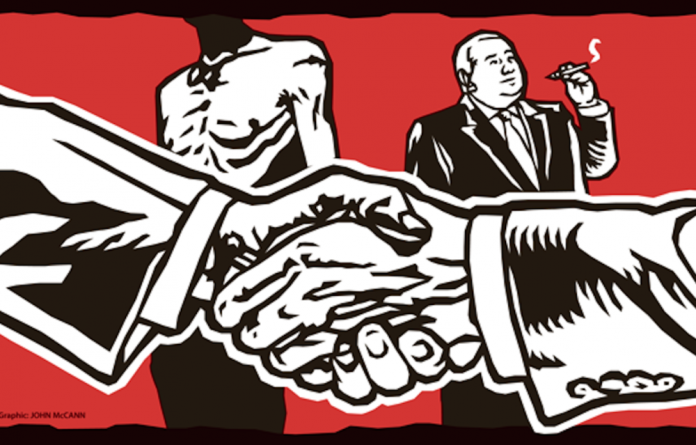 Why are we shocked? It is now evidently clear that there is rot in the South African government-business arena. Government is working hand in glove with big business to promote their own interests over national interests.

Why are we horrified?

This is happening all over the world, more intensely so in the past three to four decades. It is called the free-market system, neoliberal capitalism or deregulated capitalism. These qualifiers of the economic system are necessary, lest we fall into the trap of thinking that everything about capitalism is bad, which it isn’t.

If we are shocked at the face of the “corporate-state power nexus” (author Naomi Klein’s phrase) that has emerged in our country now, one can only assume our outrage arises because we do not understand the growing relationship between big business and politics. It is not difficult to see why we do not understand this. Most of what is written about economics is couched in terms that overwhelm the man and woman in the street, making us reluctant to grapple with a realm that feels as if it is outside our grasp.

To help us understand this link between business and state power, let us start by asking ourselves what the fundamental aim of each is. The aim of government is – or should be – to serve and improve the quality of life of its people. The aim of big business is to make money for its shareholders. Free-market economists are quick to tell us that these two aims support one another: the greater the profits and production, the more people’s quality of life will improve.

This “trickle-down” theory of economics has been shown not to work. In our own country, after 22 years of neoliberal economic policy, we have the second-highest index of inequality between rich and poor in the world.

According to statistics quoted in the Daily Maverick, 21.7% of South Africans live in extreme poverty, not being able to pay for basic nutritional requirements; 37% don’t have enough money to buy adequate food items and nonfood items, so they have to sacrifice food to pay for things such as transport and airtime; and 53.8% can afford enough food and nonfood items but fall under the widest definition of poverty in South Africa, which means they survive on less than R779 a month.

What does business need to make ever-growing profits? It needs to cut production costs, to be subject to as few trade and emissions regulations as possible, to get its products across the globe as quickly and economically as possible, and to be subject to as little taxation as possible. None of this is possible without state sanction and inter-state agreements. As Cambridge economist Ha-Joon Chang says: “Economics is not a science like physics or chemistry, but a political exercise.” Governments make all of these conditions possible for big business.

Surely it must be obvious that governments cannot fulfil their fundamental task of improving quality of life for the poor if they have to permit lower production costs, lower taxation rates and unaccounted-for environmental and social damage.

In fact, one of the first neoliberal measures governments often take is to lower their own social spending, as Finance Minister Pravin Gordhan did in his recent budget allocation. How so, when he provided for an increase of 3.5% in grants to foster care providers who care for 3.7?million orphans in our country? As Patrick Bond, political economy professor at the University of the Witwatersrand, pointed out recently in the Mail & Guardian, the double-digit rise in inflation this year means that 16.5?million grant recipients will be receiving less than they did last year. The government’s efforts to secure “investor confidence” mean the poor have once again suffered.

How does it happen that a government turns against its own mission of caring for all its people? You give a few big players in government enough personal benefits that they willingly close an eye to their responsibilities as they grant unhealthy concessions to business. I say “a few” because it is by no means our entire government that has been open to unethical enticement.

In a recent radio interview, ANC anti-apartheid activist and former minister of public enterprises Barbara Hogan was asked what had gone wrong with the visionary liberation movement. Her response was: “We have not properly understood what must be the boundary between business and politics.”

Sadly, this line has become increasingly blurred, not only in our country but all over the world. And just in case you are thinking that it is happening more in Africa or in developing continents that states are “captured”, I would urge you to read Klein’s book This Changes Everything: Capitalism vs the Climate for multiple examples of deplorable business-state collusion in North America and Europe, particularly with regard to the extractive fossil fuel industries.

Lest we imagine that corruption is only embedded in the intersection between government and business, we must question our contribution to this sordid state of affairs. Our own consumer habits are a fertile breeding ground.

We wear gold jewellery, but have we gone to see the conditions of Bekkersdal and Ikaneng townships, say, which arose as a direct consequence of the mining industry? As we drink our pints of beer (and contribute to the earnings of the country’s highest-paid chief executive), have we reflected on how alcoholism affects families who buy liquor from one of the thousands of shebeens that our liquor industry licencss?

As we retire at night under a warm blanket, have we cared to check where it was made? If not in this country, have we considered which mother’s family has been pushed below the poverty line because she lost her job in our gutted textile industry?

If our response to these questions is “no”, we are perpetuating a dominant global economic ideology that says profits are more important than human life.

Unless we are willing to challenge the workings of the global economy and our own role in it, we will put another leader in power who falls in with the prevailing economic system of the day, acceding to big business and pandering to our insatiable acquisitive appetite.

How do we challenge something as big as a global economic system?

Dr Nick Galasso and Dr Marjorie Wood provide some helpful pointers in their article Eight ways to reduce global inequality on inequality.org. Here are six of them.

Judy Connors is the director of Phaphama Initiatives, a nongovernmental organisation that works in conflict transformation, gender reconciliation and youth mentorship