Social scientists ‘humour us’ with their findings 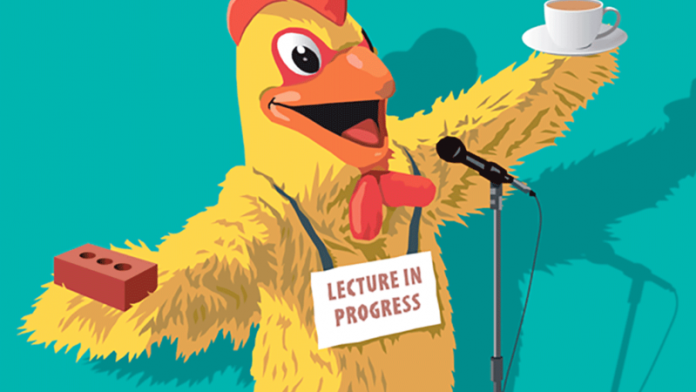 Despite what some people might think, academics are not all humourless boffins out of touch with the real world. They can also be funny, and some are turning to humour to help get their messages across.

Last November, the Times Higher Education reported that zooarchaeologists from the University of Nottingham had hired a stand-up comedian to disseminate the findings of their research on human-chicken interactions to the public. Although the report took the opportunity to poke a bit of fun at this, the purpose was to make the entirely serious point that human-chicken interactions are no joke.

Using comedy to create awareness of research is less ridiculous than it might at first appear. Public engagement is the new black in academia, with pressure growing on academics around the world to show the effect of their research. A growing number are now starting to realise the potential of comedy to deliver hard-hitting social insights.

In 2010, two science communicators in public engagement at University College London created the Bright Club, where “researchers become comedians for just one night”. The success of the format – each performance features a mix of comedians and researchers – has resulted in chapters sprouting up around the United Kingdom.

One of the Bright Club founders, Steve Cross, created and now comperes Science Show-off, a “chaotic cabaret for science lovers”. He welcomes any sort of performance, including stand-up comedy, and is keen to have academics present.

It would be easy to dismiss the performers at the Bright Club as wannabe stand-ups intent on escaping the drudgery of academia. But good stand-up comedians are capable of achieving what social scientists often crave: getting an audience to critically engage with a subject.

And, as anthropologist Kate Fox has argued, “at its best … social science can sometimes be almost as insightful as good stand-up comedy”.

Comedy can be used to challenge social norms, or speak out against social injustices. For instance, what better way to begin explaining what a class system is than to say it is “what you use to discriminate against people who look like you” – as comedian Reginald D Hunter has done.

Humour hasn’t just been neglected by social scientists, it has been actively rejected. To be a humorous academic appears to be an unacceptable oxymoron and those who use humour in their work run the risk of being seen as not serious, and therefore trivial. Even Erving Goffman, one of the greatest social scientists of the 20th century, is regarded in some quarters with suspicion for his “sparkling” humorous prose. There are many who would agree with his own apparently self-denigrating epithet of being an “elegant bullshitter”.

Goffman’s technique depends on irony. By overturning received ideas and the logical contradictions that shape our most deeply held convictions, irony has the potential to provide new theoretical insights. It can function as an analytical tool.

An appreciation of irony is arguably an essential attribute for the social scientist. It underlies the law of unanticipated consequences which says that “actions of people – and especially of government – always have effects that are unanticipated or unintended”. It has been claimed by some eminent thinkers (among them Adam Smith, Karl Marx and Machiavelli) that this is the most important phenomenon the social sciences have to deal with.

Irony also underpins the concept of “planned incongruity” in which, through a deliberately induced incongruity, the apparently rational is undermined, re-emerging as irony. For example, the American economist Thorstein Veblen’s idea of “trained incapacity” – that a person’s narrow specialisation in a particular subject can actually widen their field of ignorance.

Irony certainly produces comic pleasure and the extent of this pleasure can be directly related to two key principles: the principle of “high contrast” and the “law of irony”. The principle of high contrast says that the more incongruous the ideas put together the more pleasurable the result will be for the reader or listener. The law of irony asserts that, when an ironic statement combines high contrast and high certainty of outcome, the resulting statement is of greatest theoretical value. For example, the utopian paradox states that utopia, if achieved, would result in disaster.

By combining these two ideas, we can see that the most pleasure is derived from the highest incongruity, which also gives rise to the greatest theoretical insight.

This produces the somewhat unexpected, hence ironic, finding that the most important sociological insights are also likely to be the ones that produce the greatest comic effect. In other words, the funniest. – theconversation.com

Cate Watson is a professor of professional education and leadership at the school of social sciences, University of Stirling. Ioannis Costas Batlle is a PhD researcher in education at the University of Bath.

Simons says School in a Box helps him get top marks