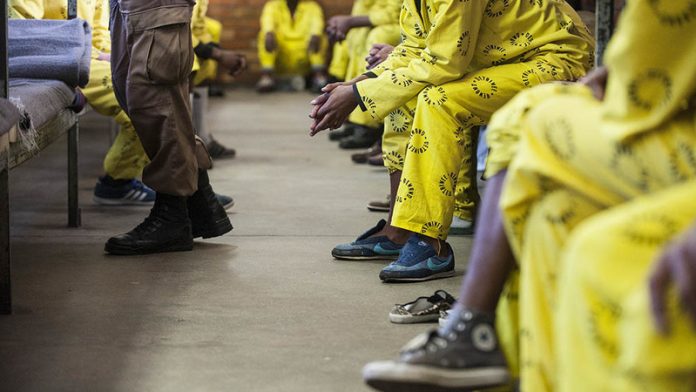 As office-bearers of the Fab Foodie Foundation, we felt it was incumbent upon us to check out the new eaterie at Pollsmoor prison, now open to anyone who feels a little nostalgie de la boue and would like to be served by convicts. This is an opportunity to interact with prisoners and to sample the results of their cooking skills.

We found the bouillabaisse a good opener, but it has to be said that it was a little murky. Diner One, who has a sharp eye for these things, thought he found a slight trace of recidivism beneath the surface.

The alternative for a starter, the avocado ritz, we felt was also a good choice but prawn size must always be monitored. Some of these were no bigger than a fingertip!

See: Dining in Pollsmoor: The ethics of a prison restaurant

The avocado itself, of course, has to be paid the most careful attention. It must be fleshy yet firm, fully ripe yet not overripe. You might say it should be on the cusp of overripeness, without having quite gone there. No brown bits, in layman’s terms.

Attention must be paid not only to the physical or material properties of the avocado. It is also, as a great Serbian gourmet said, a “sublime object of ideology”. Nowadays we are all sensitised to such things, so it’s worth checking that those sublime avocados don’t come from Israel. You wouldn’t want to be eating any avocados with blood on their hands.

You certainly wouldn’t want BDS protesting outside Pollsmoor. That’s a joke, by the way. Diner Two made that joke in the presence of our waiters, just as they were serving the avocado ritz, and they all laughed.

Speaking of which, the interactions with the convicts were a highlight of the occasion. They seemed to be in very high spirits themselves. Perhaps having some casually but expensively well-dressed upper Capetonians around was just the thing they needed to give their day a little lift?

“What are you in for?” Diner Three asked a waiter brightly.

“And you?” I, Diner Four, asked my waiter, thinking to keep the ball rolling.

“Ah,” I said, “and did you have anything to do with the preparation of the food itself?”

I thought perhaps we’d better stop there, and anyway the main course was arriving – cod in said sauce for Diners Two and Four, the steak with a balsamic reduction for One and Three. It was a bit tough, the steak, but that’s prison for you.

There was no dessert.

​Begin the day with breakfast at The Shortmarket Club

North West premier refuses to resign as IPC looks for...

Sources say Job Mokgoro has refused to abide by an order to resign as premier, making it hard for the IPC to install a new person in the position
Sport

The Super Falcons are the undisputed queens of African football, winning 11 of the 13 women’s continental championships ever played. But they still have to beg the Nigerian federation for pay and respect
Advertising