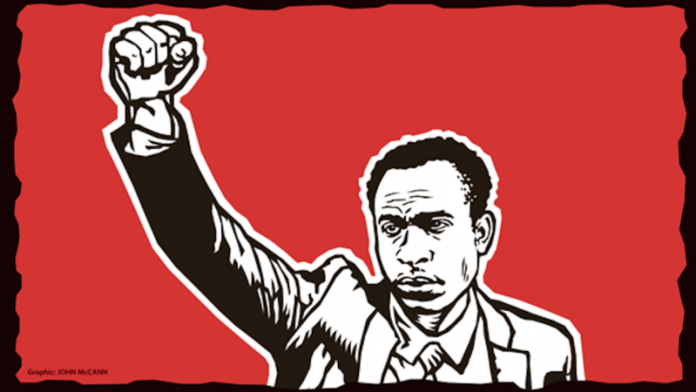 If there’s a philosopher of the moment it is, by some distance, Frantz Fanon. This is not surprising given that Fanon offers compelling accounts of the pathologies of both the colony and the postcolony – spaces that some of the young people at the fore of the new ferment in South Africa feel they must inhabit simultaneously.

Twenty years ago things were very different. The left, in and out of the ANC, was largely committed to more orthodox Marxist ideas.

In the academy it was common for the elaboration of an argument in dialogue with Fanon’s thought to be – publicly or privately – rejected out of hand as unethical, on the basis that Fanon was deemed to be a theorist of violence.

This reduction of Fanon’s thought to his endorsement of armed resistance to the massive violence of French colonialism in Algeria has been around since the moment Fanon’s last book, Les Damnés de la Terre, mistranslated as The Wretched of the Earth, entered the world shortly after Fanon left it in 1961.

From the beginning, Jean-Paul Sartre’s preface, with its sense of the anti-colonial struggle as simply a violent clash between two absolutes, set the tone for much of the reception of the book. It has been argued that political theorist Hannah Arendt’s influential early critique of Fanon is, in fact, a response to Sartre rather than to Fanon.

It is reported that when Fanon, at that point gravely ill, read Sartre’s piece he put it down without saying a word. Some time after his death his widow, Josie Fanon, sought to have it removed from the book. Fanon’s biographer, Alice Cherki, who worked closely with him in Algeria and Tunisia, writes that Sartre’s preface “distorted Fanon’s tone and intention” and that Sartre, though wanting to please his friend, had inadvertently “betrayed Fanon”.

Of course Fanon was directly engaged in armed struggle against fascism in Europe and, later on, French colonialism in Algeria. And there are a few passages in the opening chapter of his last book in which he theorises political violence in the particular context of the settler-colony and anti-colonial struggle.

But endorsement of armed resistance to colonial occupation hardly marks him as an exception among philosophers insofar as it affirms the legitimacy of political violence in certain situations. Liberal philosophers such as John Locke and John Stuart Mill offered explicit support for certain forms of war – as well as colonialism, an inherently violent project. Philosophers such as Georg Hegel and Immanuel Kant saw the French Revolution, a violent eruption, as a major event in the realisation of reason in the world.

The most common fate of black thinkers in the white academy has been erasure. When they are acknowledged, they have often been largely understood through white interpreters, who have frequently relegated black thinkers to the realm of experience. Theory, Lewis Gordon has argued, is coded as white, and experience is coded as black. In the case of Fanon, white intellectuals have often reacted with paranoid revulsion to the idea of black reason entwining itself with the exercise of force. When that revulsion is entirely absent – when, say, Albert Camus or George Orwell endorse armed resistance to fascism, or a classic liberal thinker offers an endorsement of colonial despotism – we are in the presence of a racist double standard.

Any commitment to take black reason seriously must engage scrupulously with the texts left to us by black thinkers. Encouragingly, many young people in contemporary South Africa have read Fanon’s work and the growing scholarship on it with real seriousness. At the same time, though, it’s not unusual that ideas or a relation to the political are attributed to Fanon when they cannot be sustained by even a cursory reading of his texts or a basic familiarity with his biography.

Quotes are often deployed out of the broader context of Fanon’s argument. They often come exclusively from the first few pages of The Wretched of the Earth, or from Göran Olsson’s film Concerning Violence. The view that emerges is frequently a mirror image of the white misreading of Fanon that has very little to do with Fanon’s biography, or the nuance of his writings.

It’s not unusual for Fanon, as a historical personality, to be presented in terms of the hyper-masculinity that has done such damage to the left in post-apartheid South Africa, including the new student struggles.

This is certainly a misrepresentation. People who knew Fanon well, such as Cherki and the great Martinican poet Aimé Césaire, insisted that, outside of his life as a soldier, Fanon was not a violent man, that even in war he detested violence and that, in Césaire’s words, “his revolt was ethical and his approach motivated by generosity”.

Fanon was acutely concerned with the ethics of his own relations to others. Reflecting on his practice as a psychiatrist he wrote: “Examining this 73-year-old farm woman, whose mind was never strong and who is now far gone in dementia, I am suddenly aware of the collapse of the antennae with which I touch and through which I am touched. The fact that I adopt a language suitable to dementia, to feeblemindedness; the fact that I ‘talk down’ to this poor woman of 73; the fact that I condescend to her in my quest for a diagnosis, are the stigmata of a dereliction in my relations with other people.”

Fanon’s philosophy is grounded in a conception of the human being as open and dynamic. The human person, he insists, in his first book, Black Skin, White Masks, “is motion towards the world”.

He concludes that book with this declaration: “I want the world to recognize, with me, the open door of every consciousness.” In this book, written while a student in France, he describes a series of failed attempts to attain recognition as an autonomous person in a racist context.

He declares: “All I wanted was to be a man among other men. I wanted to come lithe and young into a world that was ours and to help to build it together.”

But, “sealed into a crushing objecthood”, he has to face the reality that in a racist society he is denied access to the realm of the rational. He could not be simultaneously recognised as black and as reasonable: “When I was present, it was not; when it was there, I was no longer”. After this realisation, he describes a breakdown followed by a commitment to be actional, to remake the world on a human basis through an ethical project organised through “the basic values that constitute a human world”.

His second book, Year Five of the Algerian Revolution (retitled A Dying Colonialism), deals with the anti-colonial war in Algeria. Although this book is about politics in the context of war, it is not – not at all – centrally about violence. It is about how people, women and men, change and grow in struggle and assume “democratic responsibilities”.

Fanon focuses, in particular, on how the colonial categories that initially shape anti-colonial resistance are transcended. It is now time, he insists in the concluding pages of the book, “for reason to make itself heard”. Struggle emerges not as a simple matter of force against force, but as a sphere for the enlargement of solidarity, personal and collective change and the transformative exercise of reason.

Fanon’s final book, The Wretched of the Earth, offers a critique of settler-colonialism, anti-colonial struggle and post-colonial regimes. It ends with a harrowing account of the damage wrought by the violence of colonial war.

Its closest African reader, Ato Sekyi-Otu, shows that a set of emphatic statements offered at the beginning of the book are later challenged as Fanon’s narrative unfolds.

Anti-colonial resistance begins, Fanon argues, within the crude parameters of the logic of colonialism. There is, he says, “a brutality of thought and mistrust of subtlety”.

But as there is movement along what he calls “the weary road to rational knowledge”, colonial paradigms are transcended rather than merely inverted. In Fanon’s words, “the racial and racist standard of judgment is transcended.”

So, to take just one instance: in the beginning it is asserted that: “Truth is that which hurries on the break-up of the colonial regime; it is that which promotes the emergence of the nation; it is all that protects the indigenous people and ruins the foreigners.” Later on: “The idyllic and unreal clarity of the beginning is followed by a semi-darkness that bewilders consciousness”; “Consciousness slowly dawns upon truths that are only partial, limited and unstable”. Things are rethought in the light of the experience of struggle, of collective motion, against colonialism. The fundamental purpose of Fanon’s account of this move out of the logic of colonialism is, Sekyi-Otu argues, “to stage the upsurge of richer modes of reasoning, judging and acting” than those immediately accessible within the limits of colonial thought.

Fanon is fundamentally committed to the emancipation of reason from colonial distortions. It is his commitment to reason, a universal and radically egalitarian conception of reason, and not violence that lies at the heart of his thought.

Dr Richard Pithouse teaches politics at Rhodes University and is also the senior researcher at its Unit for the Humanities. His new book, Writing the Decline, is out now