Going back to mama’s cooking 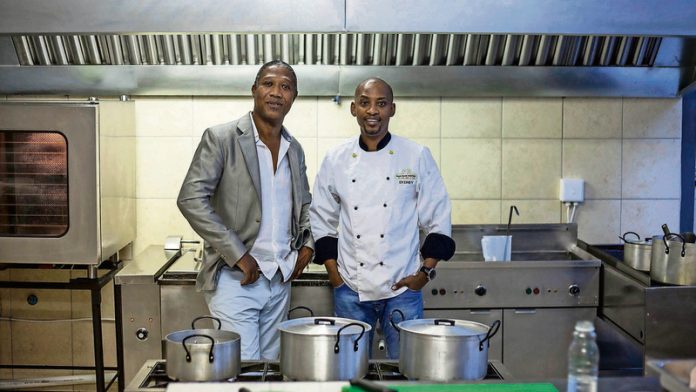 If you are what you eat, then an overwhelming number of South Africans have the DNA of multinational fast-food outlets. Now many black South Africans are rediscovering their traditional dishes and embracing them with the same enthusiasm they have for take-away food from the United States and Europe.

The owners of Nom Nom Kitchen, Eddie Brannerman and Sydney Matlhaku, describe their African food take-away kitchen as “the back door to your Mama’s kitchen” – a place where you always find the aroma of morogo (wild spinach), mogodu (tripe) and umngqusho (samp and beans).

In 2014, radio personality Kgopedi Lilokoe took to Twitter to tell the story of how she landed in hot water with some of her neighbours for killing a chicken in her backyard. In a hilarious exchange called #Chickengate, Lilokoe tweeted her followers about the letters she received and the meetings she was summoned to for doing something she grew up doing regularly.

Hard body, as home-slaughtered chicken is colloquially called, is a part of many black people’s lives, but it is a tradition many left behind when they moved into suburban areas.

Decolonising our palates and our minds
Experiences such as Lilokoe’s is one of the reasons that Matlhaku and Brannerman decided to start Nom Nom Kitchen, which has been open since February and has received an overwhelming response from people who are tired of eating fast-food and food they didn’t grow up eating.

“This is an active way of decolonising our palates and our minds. We are saying it is okay to take your food to work, to have dinner parties with South African food on your plates,” Matlhaku says. “Our food should not be left for our mothers’ kitchens only. We must bring it into the leafy suburbs that we live in as well.”

The two decided against the idea of a restaurant mainly because of the costs involved but also to focus on the quality of the food. Dining out, although big in South Africa, is not a concept that many traditional black families indulge in. Most prefer eating and sharing a meal with their loved ones in the comfort of their own homes.

African cuisine such as mogodu, maotwana (chicken feet) and ditlhakwatlhakwana (trotters) is controversial because of their links with colonialism. Research has shown that pre-colonial indigenous food was predominantly made up of cooked grains, variations of amasi (sour milk) and roasted, dried or stewed meat. The consumption of offal and hooves and feet is said to have only begun in post-colonial Southern Africa because of the colonisers stealing resources such as land and livestock from indigenous ­people.

Filling a much-needed gap
Although Nom Nom is filling a much-needed gap for the black middle class of Johannesburg, the food and stall owners of the Bree and Noord street taxi rank have been meeting the needs of city dwellers for decades. On a small corner behind the Park Station on End Street is where 23-year-old Thandanani Nyandu prepares his pap and skop (sheep head) for his customers every morning.

He uses wood that he finds at an industrial site nearby to make a fire to cook the food. His dining area – a plastic table and two chairs – is next to the cooking pots.

“When I left home in kwaNongoma for Johannesburg, I didn’t think I would be cooking to make a living but it is something I have learnt to love. I have always loved cooking.”

Nyandu has no idea that African cuisine is the latest trend in the suburbs. For him, preparing this kind of food is as normal as breathing. “My customers love this food, but so does everyone else around here. This is not something new.”

Although many people scoff about Nyandu’s food, referring to it as “street food” or “taxi rank food”, for him and his patrons it is a little different to the food served in restaurants.

Food, like many other things in society, plays an integral part in how identity and culture are shaped. And in an era in which decolonisation has taken centre-stage, what is considered radical and politically aware in a place such as Nom Nom is seen as second nature in Noord and Bree taxi rank. These two worlds are a necessary part of defining of what blackness means.

The final part of Zamansele Nsele’s interview with Frank B Wilderson expands on some of the thinking in his latest book, ‘Afropessimism’
Read more
Article

The slain dancer and choreographer was so much more than an internationally celebrated artist. They were also a proud queer rights activist and a beloved child and friend
Read more
Friday

The foundations of Afropessimism: A reading list by Frank B Wilderson III

The Netflix series Sex Education shows that whether you’re celebrating or vilifying “the Other”, it’s all part of the same subjugation
Read more
Friday

Leon Schuster is having a few movies of his removed from Showmax and Phumlani Pikoli figures: what better time to reflect on this bruh than now?
Read more
Advertising
Continue to the category
Business