Gangsters give crime the finger 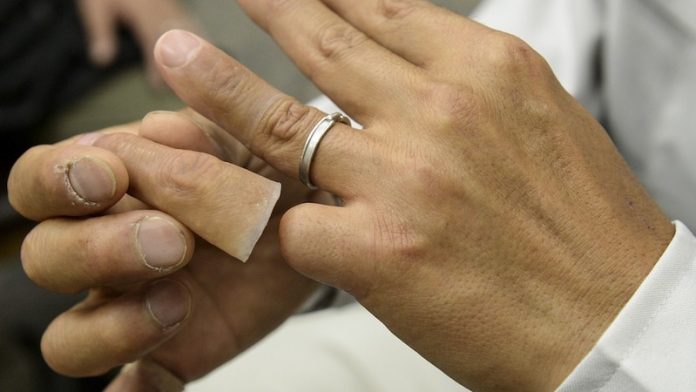 When Yukako Fukushima holds the finger to the light, there is a brief moment when it is indistinguishable from her own, real, digits. Nothing about it screams fake. To the untrained eye, it is flawless.

Soon it will be ready for collection by its new owner, one of hundreds of hardened gangsters who have sliced off their pinkies in a ritual show of contrition, and who owe their exit from the underworld and back into the mainstream to Fukushima’s remarkable prosthetics.

They are members of the yakuza – Japan’s vast network of organised gangs – who are desperate to leave behind their lives of crime.

But for those who have transgressed – by mishandling money, failing to repay a debt, or simply offending their boss – there is a striking physical obstacle to re-entering mainstream society: the painful, and glaringly obvious, self-amputation of one their little fingers.

That is where Fukushima comes in. For the past two decades, she has hand-crafted hundreds of pinkie fingers for former gangsters – a minor cosmetic accoutrement that has helped them to find jobs and marriage partners, and a semblance of normal life.

Amid recent police warnings that Japan’s most powerful crime syndicate, the Yamaguchi-gumi, is in a state of “all-out war” with a break­away rival, the coming months could be her busiest yet.

“This wasn’t something I planned to do long-term, and I was about to look for another job when someone told me that I was the only person in Japan doing this kind of work,” said Fukushima, who works at the Arte workshop in downtown Osaka, run by the prosthetic and welfare firm Kawamura Gishi.

“If you lose a finger in a car accident, people are sympathetic,” said Fukushima, who has won two government awards for her work helping yakuza rehabilitate and reintegrate back into society. “But that’s not the case with the yakuza. Most people can’t get past their tattoos or missing fingers.”

Her decision to continue producing artificial pinkies for reformed mobsters resulted in the breakup of a relationship and criticism from her family for “enabling” gangsters.

But it also coincided with a dramatic rise in demand for her services. The 1992 anti-organised crime law brought Japan’s underworld under unprecedented police scrutiny. Combined with the bursting of Japan’s economic bubble – a cash cow for gangsters involved in real estate – the legal challenge to decades of official and public tolerance sent large numbers of mobsters to Fukushima’s door in search of a prosthetic pinkie and a fresh start.

“Word of mouth spreads incredibly quickly among the yakuza, particularly when they are in prison,” she said.

Fukushima will only agree to make a pinkie, which can cost more than £1?500 (roughly R31 000), under certain conditions. A group set up by the Osaka prefectural police to help rehabilitate former yakuza introduces her to potential clients after confirming that they have decided to go straight.

“I need proof that they have definitely left their gang, and I won’t accept extra cash from people who want to jump the queue,” said Fukushima, a native of Osaka whose strong dialect isn’t far removed from that spoken by many of her clients.

“I’ve had complaints from gangsters who didn’t like the look of their new finger, but I won’t listen to their threats, even if they come here and start throwing the furniture around. Fortunately, it doesn’t happen often, and the police look out for me.”

Yubitsume – literally finger shortening – is thought to have originated among the bakuto feudal-era gamblers who are considered the predecessors of the yakuza.

Men who were unable to pay their debts were forced to cut off the top portion of their left pinkie, leaving them with a disability that made them less effective as swordsmen.

Nailed it: Yukako Fukushima says she will only make prosthetic pinkies for gangsters if she has proof that they have definitely decided to go straight. (Yoshikazu Tsuno/AFP/Getty)

Typically, yakuza transgressors use a razor-sharp knife to remove a section of finger above the top knuckle, before wrapping the severed part in cloth and offering it to their boss. Contrary to popular belief, the ritual of self-amputation is rarely performed as a voluntary sacrifice.

If the misdemeanours continue, more amputations follow, beginning with the second joint in the left pinkie and, in extreme cases, continuing on to the right hand.

Fukushima’s artificial finger tips, like the other body parts she makes for people who have been in accidents or suffered serious illness, are the products of incredible attention to detail.

The fake tip, which lasts five to 10 years, slides on to the existing stub much like a lid onto a pen.

Drawing on about 20 colours, she can create more than 1? 000 skin tones to ensure that the fake digit looks exactly the same as its owner’s other fingers. Every last detail, down to fingerprints, curvature, nails and veins, is expertly reproduced in silicone.

In Kobe, a short train journey west of Fukushima’s office, the Yamaguchi-gumi is in the midst of its biggest crisis since it was founded a century ago – and one that is creating a new generation of men who no longer wish to live by the sword.

Police have been warning of a potentially violent power struggle since last summer, when more than a dozen gangs with connections to the Yamaguchi-gumi decided to form a breakaway group in protest at the leadership of Shinobu Tsukasa, the Yamaguchi-gumi’s septuagenarian boss.

In March, police said the organisation and its rival gang, known as Kobe Yamaguchi-gumi, were in a state of “all-out war”, with almost 50 incidents since the split, including the use of firearms and Molotov cocktails. The conflict has already hit membership of the Yamaguchi-gumi, and could send more repentant mobsters to Fukushima’s office.

Nationwide, tougher anti-gang laws and years of economic stagnation have seen the number of active gang members drop to around 53 000, from 80 000 in 2009, according to the national police agency.

Fukushima was reluctant to comment on the turf wars or to speculate how they might affect her business, but said: “I just hope the vendettas end soon, but with all this talk of war, right now isn’t the time for people to leave. After all, a lot of yakuza behaviour is still dictated by the ideas of duty and obligation.”

Though a new pinkie is no guarantee that a gangster will change his ways, Fukushima receives enough letters of thanks to convince her that her digits make a difference.

“I hear from men who have got married and had children or found a job. Others tell me they have straightened themselves out and apologised to their parents for the years of misery they put them through,” she said. “Some tell me they’re simply glad to be alive, even though there were times when they’d wished they were dead.

“When I hear stories like that it motivates me to carry on. I’m not doing this as a service for the yakuza. I’m doing it for men who want a second chance and to be good role models for their children.” – © Guardian News & Media 2016