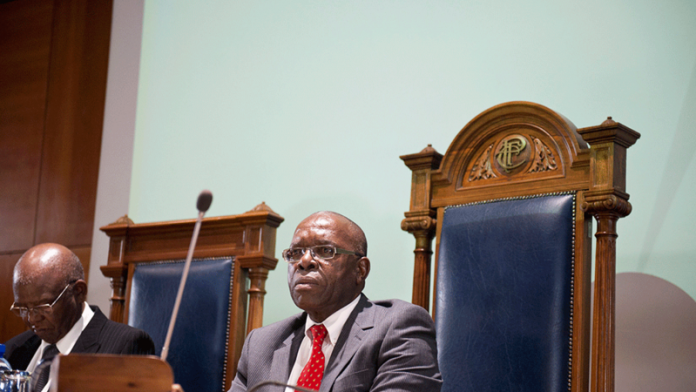 There was only ever going to be one outcome from the Seriti commission into the arms deal, given that it excluded crucial evidence and that there was a spate of senior resignations and a litany of complaints regarding a “second agenda”.

“The commission does not make any recommendations. There are no findings,” President Jacob Zuma told the nation in a live televised address on Thursday morning.

The process guiding the Arms Procurement Commission will probably be taken on judicial review, formalising questions about a long line of problems with the process.

Hennie van Vuuren, an outspoken arms deal activist, says a group of critics is seeking legal counsel on the “legality of the commission’s conduct and the viability of a legal review to have the report set aside”. But they still need to consider the findings in detail, he said.

The group also includes Terry Crawford-Browne and Paul Holden. All three were involved in the four-year arms deal commission. “We absolutely have the intention to have the findings of the commission set aside,” Van Vuuren said.

The commission came into being only after President Jacob Zuma was forced into action by the courts. Crawford-Browne took the state to court, demanding that an investigation be done into the R70-billion Strategic Defence Procurement Packages (SDPP) signed in 1999.

Judge Willie Seriti was appointed to head the commission, which set itself up as a “fact-finding mission” instead of a forensic inquiry. Initially supposed to run for only 12 months, it ended four years later in June 2015. In that time, 54 witnesses had appeared. Its findings were given to the president late last year.

Zuma released the 767-page report on Thursday, concluding that: “Government was of the view that any findings pointing to wrongdoing should be handed over to law enforcement agencies for further actions. The report backed his sentiments. It stated: “We have given reasons why it would serve no purpose to recommend that the allegations of fraud, bribery and corruption in the SDPP procurement process be referred to another body for investigation.”

The only thing that might be further investigated – the deviation from standard procurement procedures – need not be, because the processes had been overhauled, it said. “Another investigation into the SDPP will serve no purpose.”

But the commission was dogged by controversy. Several observers said its make-up and the controversies ensured that its findings would let people off the hook. The biggest problem raised was that little evidence proving corruption was accepted by the commission.

• In June 2012, two respected advocates, Vas Soni and Sthembiso “Sticks” Mdladla, were removed from the commission. The Mail & Guardian reported at the time that a legal source said they had been removed on “flimsy grounds”.

• In January 2013, senior investigator Norman Moabi resigned, accusing Seriti of operating with a “second agenda”. This was to ensure that the commission did not implicate senior members of the ANC, he said.

Moabi also released what he said were transcripts of questionable statements made by commissioners. In one, a commissioner said: “When we will have dealt with the first witnesses, they will not again make noises in the public media.”

The commission denied his claims.

At the time, Crawford-Browne said the arms deal could be heading back to court. “It could well be. We have given the Seriti commission enough rope to hang itself.”

• In March 2013, researcher Kate Painting resigned. In a statement she said: “Fear is a common theme at the commission and any noncompliance with the second agenda is met with hostility.”

• Holden said army and navy witnesses had not been properly interrogated. His colleagues, Andrew Feinstein and Van Vuuren, complained that they were not given adequate access to the mountains of documentation necessary for preparing their evidence. They also complained that much of the evidence that they said proved there had been corruption was not included in proceedings. As a result, implicated parties who would appear at a later stage could say there was no evidence proving any guilt.

• In August 2013, Judge Francis Legodi, the third commissioner, resigned without giving a reason.

• In August 2014, two evidence leaders, Barry Skinner SC and Carol Sibiya, resigned. Their damning 15-page resignation letter was leaked to the media. They complained they were not given access to key documents and that they were prevented from cross-examining witnesses.

A disk with 1 061 documents, which arms deal activist Richard Young submitted before appearing before the commission, had not been handed over to the two evidence leaders, even though they had to question him during his appearance.

Skinner and Sibiya also criticised Seriti’s decision not to permit as evidence a leaked report that showed the German arms dealer, Ferrostaal, had paid R300-million – through a web of middlemen and offshore accounts – allegedly to influence senior politicians to secure the sale of submarines to South Africa. The two said that denying similar documents “nullifies the very purpose for which the commission was set up”.

• Also in August 2014 Holden, Feinstein and Van Vuuren withdrew from the commission and refused to testify. This was “in protest at the manner in which it was conducting its investigation”.

• During this time, the commission made several appointments that were questioned by people inside and outside of the investigation. These included hiring Riena Charles as a legal investigator – after she had been acquitted on fraud and corruption charges. The appointment of Pretty Luphondo was questioned, as she was previously a human resources director at the department of justice and not a legal professional.

• Implicated arms deal companies and middlemen said the same thing. In his closing statement, Jaap Cilliers, counsel for alleged “middleman” Fana Hlongwane, said there was no evidence of corruption.