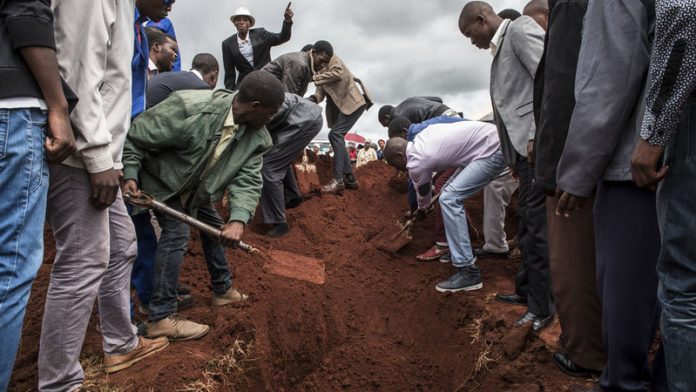 It’s 7.30am on an overcast Saturday in Enkangala, a rural township near the Mpumalanga border. Residents start to trickle into the community hall. Another young person addicted to nyaope has died.

As a family member walks up to the stage to deliver the eulogy, melodic voices from the congregation echo between the walls of the hall, singing: “Nguye osiholayo, He leads us. Nguye osiphatha kahle, He is the one that takes care of us.”

This isn’t just any addict. Thirty-one-year-old Lerato Mokhara spent most of her young life hooked on drugs and this mixture of heroine and marijuana, the cheap and highly addictive drug of choice for working-class teens.

Towards the end of her life, Mokhara became an activist of sorts, starting an informal drug rehabilitation centre in Enkangala’s community hall and trying to unite her fellow addicts.

She relapsed after two years.

Her funeral is being held in the same hall in which she had tried to break her habit, and in which she had encouraged many other addicts to do. The hall occupies a complicated space in the Enkangala community: it’s a symbol of hope and determination, but ultimately one of defeat too.

Lerato Mokhara tried hard to stay clean but her attraction to nyaope was to prove fatal.

It was here that Mokhara and her fellow addicts set up camp in early 2014, determined to kick their addiction to nyaope.

The community rallied around them, providing food to the more than 60 addicts who lived there. There was no formal training or programme; just sheer willpower, with the community drawing inspiration from the familiar. Christian values and prayer fuelled their gatherings – along with anti-apartheid struggle songs, with nyaope standing in as the enemy of the people, one they were determined to overthrow, just as they had the apartheid government.

A few months after they gathered, the Gauteng social development MEC, Faith Mazibuko, got wind of the informal rehabilitation camp and tried to assist. The department worked with the group to formalise their activities, and also sent some of them to formal rehabilitation centres in other parts of the province.

Most were sent to the only state-run facility in Gauteng, the Dr Fabian and Florence Ribeiro Treatment Centre in Cullinan. Others went to clinics run by the South African National Council on Alcoholism, a 60-year-old nongovernmental organisation, which works closely with the government.

The Enkangala community pay their last respects to a young woman in the same hall in which she tried with fellow addicts to kick the habit. (Photos: Troy Enekvist, M&G)

Kagiso Kekana (22) was a member of the group of addicts who lived in the hall. In Mokhara’s group he found a temporary solution, regardless of its limitations.

“The hall was good for us, especially the first group of addicts,” he said, explaining how his own attempts to break the habit had failed.

Nyaope would prove itself to be a potent and insidious enemy. Drawn by the atmosphere, a second group of addicts joined Mokhara’s informal camp, but they brought the drug with them.

“[It was] after the other addicts starting joining in that I would hear people saying that people were bringing sek’hafothini [a secret stash] of nyaope inside the hall. That’s when things started going wrong,” Kekana says.

Shortly after that, the informal centre was shut down by the MEC, who wanted the addicts to receive professional help. Today, use of the drug is as rife in the Enkangala community as it was when Mokhara bravely tried to fight it off.

Kekana relapsed after he was admitted for free treatment at a formal rehabilitation centre with the department’s help.

With both his parents unemployed, the family survives on whatever meagre income they make from selling alcohol and cigarettes from their home. Kekana’s mother, Meisie, is still putting her hope in state-run rehabilitation centres.

“The hall didn’t work for him. Getting off nyaope here at home didn’t work either. So our only hope is if he goes to rehab. Then it’s up to him to change,” she says.

Kekana is enrolled for a second stint at a formal rehabilitation clinic.

Thabile Nhlapho (top) and Kagiso Kekana live across the street from one another and have been to rehab several times.

Twenty-one-year-old Thabile Nhlapho lives across the road from the Kekana’s home. He has been taking nyaope for nearly five years. Like Kekana, he has had more than his share of help to kick his habit, but he keeps relapsing.

Nhlapho and a few other addicts who had gathered at the hall were sent to the Dr Fabian centre in Pretoria in 2014. He completed the six-week programme but he fell back into his old habits.

Nhlapho puts this down to the lack of work for young people like him. “When you come back from rehab, you come back to the very same people you used to smoke with,” he explained. “You don’t have a job or anything to do. It’s easy to go back to nyaope.”

He is set to give rehab another go, and has been registered at yet another clinic.

Nhlapho says he wishes he could prevent his peers from experimenting with drugs, but in Enkangala it’s difficult to stop young people from being “enticed by the temporary high the drug offers”.

“The problem is that when you start you don’t look like us nyaope boys, so we’ll only notice young boys have graduated from cigarettes and marijuana to nyaope when it’s too late.”