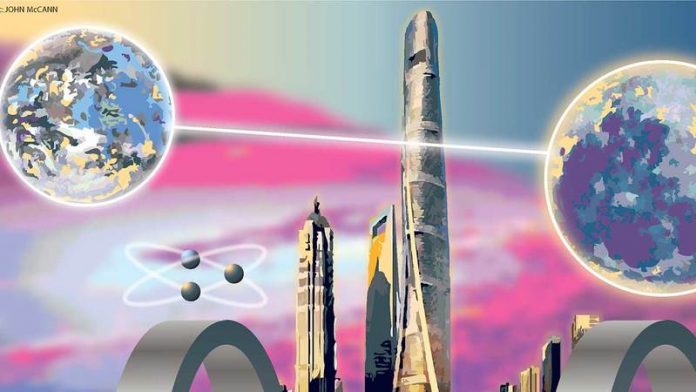 Though they both occupy the science fiction shelves, Ian McDonald and Frank Schatzing live at almost opposite ends of the genre spectrum. McDonald creates sprawling, Byzantine visions with a dreaming, fantastical eye. Schatzing crafts blockbuster future thrillers with not a little James Bondery fuelling the engines. Both have now created lunar epics, focused on a disruptive innovation in the energy industry: the use of the Moon’s rare element, Helium-3, to solve the world’s power problems.

You always knew where you were with James Bond. The geopolitics were clear. The Western alliance wore the white hats; the black hats were communist, foreigners, crazy — often all three — and chasing world domination.

When the books worked, they were a guilty pleasure: juvenile, crammed with racist, sexist and political stereotypes and snobbery, but cleverly plotted, with intriguing scenery and gripping action.

And, now that Fleming is no more, and the Bond movies have subordinated Cold War and colonial stereotypes to lavish exercises in product placement, Schatzing steps in to offer similar thrills. He is no stranger to blockbusters, having written the bestselling nature-strikes-back tale, The Swarm. Now Jo Fletcher Books has reissued in two volumes his massive, near-future 2013 epic, Limit. The split literally makes a huge original easier to handle, but in literary terms it’s a savage hack with a rusty machete through plot structure and narrative arc.

Limit is set nine years from now, when Helium-3 has solved Earth’s energy problems. A benevolent, visionary billionaire — a type far more often found in fiction than reality — has funded space elevators to ease passage to and from the Moon, where he has constructed both research stations and a luxury hotel, and is entertaining the world’s super-rich to drum up support and funding for his projects. In the background, the United States and China vie for energy rights.

Meanwhile, back on Earth, white- hat hacker Owen Jericho, cyber activist Yoyo and a bunch of unlikely Shanghainese allies alternately track and flee a mysterious organisation whose secret files Yoyo inadvertently accessed. The link between these parallel plots is a hit on yet another visionary billionaire set to attend the Moon junket — one who understands and is trying to adjust to the disruptive impact of Helium-3 on Earth’s energy industry.

The scientific backplot is complete hokum, its theory stretched thin as clingfilm and its sociological insights nonexistent. Schatzing has some fun with luxury life at low gravity, including a sex scene in the Moon hotel, which would have been much funnier with more focus on the comical gymnastics and less on throbbing gristle. But, like its genre predecessors, it’s a very male book, even when Schatzing uses his third-person narration to attempt a female perspective. His are female stereotypes as only not very bright men imagine them to be, right down to a pair of humourless lesbians. For this, and the invention of a gratuitously gay Chinese paedophile, the jacket should probably wear a homophobia warning.

Race gets similarly perfunctory treatment. The space pilot is a man of colour (called Peter Black — really?); an Oprah Winfrey clone is allegedly Latina; an environmental campaigner allegedly Native American — but their origins are name-checked by the externals of appearance. To be fair, the Europeans and Americans are no less card- board. The Chinese come off marginally better; there’s genuine care for detail in Schatzing’s portrayal of Shanghai, and all the most gripping action happens there. If there’s Orientalism, it’s in the dominant stereotype of Chinese-as-geeks, possibly a marginal improvement over sinister inscrutability.

So why read the damn thing at all? The plotting is genuinely clever, even if the space hotel scenario builds to a familiar locked-room (inaccessible Moon base) mystery. The action is tautly written, with all the adrenaline-inducing cheap thrills of Fleming. The scenery is striking and the writing has some appealing quirks of its own, including a dry wit that does not always revolve around the stereotypes, and a gift for invoking precisely the right soundtrack. In Schatzing’s world, David Bowie lived on to give a concert at the Moon hotel in 2025, a scene that — read in the week of the singer’s death — was genuinely poignant.

Music, as so often with McDonald, also runs through Luna — in this case, the saudade of classic Brazil- ian bossanova: not the often sam- bafied and obvious Fly Me to the Moon, but the quirkier and more magical 1972 Antônio Jobim com- position, Aguas de Marco (Waters of March): a song of roads that end but hope that remains.

But McDonald is much sharper than Schatzing on what a disruptive innovation like Helium-3 could mean for industry, economy and society. His billionaires are not benevolent visionaries but “dragons”: giant family enterprises, four of which have already grown fat extracting and selling minerals from the Moon to Earth. The fifth is an upstart: the Corta clan, built on the brains and ruthlessness of Brazilian matriarch Adriana, a dirt-poor engineer who spotted the potential of Helium-3 and built her own empire exploiting it under the nose of her former employers, and now bitter rivals, the McKenzies.

McDonald has described Luna as “Dallas on the Moon”, though in fact it’s rather closer to The Godfather, with blood feuds, enforcers and consigliore galore, and reluctant sons coming of age to assume the ruthless family mantle after the helium wars turn bad. His backdrop is a lunar landscape in equal parts barren, banal and terrifying.

Far from the post-scarcity economy imagined by Iain M Banks, the frontier world takes the cold equations of a free market economy to their logical conclusion.

There is no morality and there are no human rights. Everything is governed by contract; everything is bought and sold. Rich, you can build a lush, temple-filled Brazilian fantasy world underground (the Cortas) or a luxurious sealed train constantly moving across the terrain (the McKenzies). Poor, and you fight for credits to keep your personal air and water flowing, sell your piss and, when you die, get reclaimed and recycled for your constitu- ents. It’s no wonder that Adriana’s repressed chief executive son, Lucas, retreats into the bittersweet sounds of the Waters of March.

Luna is a dark, violent book, no less gripping in its thrills, chases, fights and catastrophes than Limit. But its characters are considerably more rounded, eccentric and memorable, with not a female stereotype in sight. Its social vision challenges not only the future, but also the present.

The book ends with the apparent fall of a dynasty — but a second part is scheduled. Perhaps, as the song says, next time McDonald plans not only “a knife, a death, the end of the run”, but also “the end of all strain and the joy in your heart”.

The world has not learnt anything from Mary Shelley’s Frankenstein

Tigerman: Escape from the genredarmes

A peek through the world of science fiction