How Malema and others rose above a system that failed them 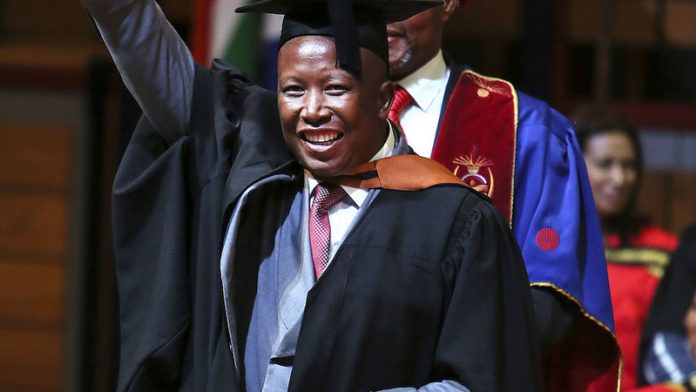 Early in 1985, a young medical intern, Mtutuzeli Nyoka, reported for duty at Livingstone Hospital in Port Elizabeth. There to welcome him proudly as a colleague was none other than his father, Dr Siyolo Nyoka. On that day, Nyoka senior, who had preached the gospel of education to his children, was “overtaken by emotion”.

Mtutuzeli, now author of at least two gripping novels and one book of nonfiction, is not your average medical practitioner. As a child, he “read everything I could get my hands on” to such an extent that, “when I was not reading, I was thinking about reading”.

His education was interrupted for a year when the 1976 student uprisings swept through the land. Snippets of his biography are contained in his Deliberate Concealment, a book about his time as a cricket administrator and his fight against corruption in the sport.

Since democracy, the challenge we have as a country and as a people has been how to multiply, massify and diversify the Mtutuzeli Nyoka experience with education in general and post-school education in particular. On the face of it, this should be more possible in the democratic era. But the challenges we face are immense.

The Nyoka family is rare – rare in the days of apartheid and still rare in post-apartheid South Africa. Unlike Mtutuzeli, most black graduates are first-generation graduates. Unlike Mtutuzeli, most do not grow up in houses full of books and families where parents value education. Most are born to parents so poor they reckon it is better to save their last cents for a decent funeral for themselves and their children than for post-school education. Many are born to single parents who can hardly afford to put food on the table, let alone pay university fees.

Born a few years before 1994, Philani Dladla, author of The Pavement Bookworm, had such parents. Survival and not education was what his parents were concerned with. The first book he ever owned, given to him by his mother’s white employer when he was 12, established his love for books. Gradually, he became addicted to books.

But later Dladla developed another addiction. Drugs. Which is how he ended up a street kid in Johannesburg. But the addiction to books proved stronger; he established a new profession — selling books and doing book reviews to motorists on Johannesburg’s Empire Road. In another country, at a different time, under different circumstances, Dladla might have been a literature scholar. Despite his tenacity and his love for books, Dladla fell through the cracks of our post-apartheid higher education system, straight on to the drug-infested streets of Hillbrow.

Born one year after Nelson Mandela walked out of jail, Malaika wa Azania chronicles the story of her life in her Memoirs of a Born Free. She paints vivid pictures of the poverty, resistance and violence of black life in the townships and squatter camps of her youth.

More importantly, she devotes a large part of her memoirs to her educational journey — including stories of her “refusal to assimilate into whiteness” when her single-parent mother enrolled her into a model C school. She studied for a short time at Stellenbosch University.

“The walk from one end of the garden to the other felt like a march through the valley of the shadow of death,” she wrote about her brief stint at Stellenbosch.

Currently studying at Rhodes University, Wa Azania has found solace in books and in student activism. She also writes about how her mother has struggled from one job to the other, one pay cheque to the next, and how her ability to stay at university has remained uncertain as a result. She, too, has found the post-apartheid education system an alienating space, hard to access and harder to stay inside of.

And yet, by the age of 22, she was already an author of one monograph and several newspaper columns.

Khaya Dlanga was a teenager when democracy came knocking at the door. In his book, To Quote Myself, Dlanga tells the story of how his single mother, after selling every goat, cow and every piece of land she owned, still ran out of money to pay for his fees at the AAA School of Advertising in Cape Town. As a result, Dlanga effortlessly joined the ranks of Cape Town’s homeless, working late at school so he could sleep on the premises and sometimes in abandoned buildings off campus.

Eventually, Dlanga dropped out of school without the diploma he had dreamed about, and left the Eastern Cape for Cape Town. He offers a biting critique on the post-apartheid higher education system. He asserts that black students struggle in higher education institutions because “the system is too dumb to understand their plight”.

Fate, luck and Dlanga’s relationship with religion pulled him back to education and success by a different route. At this stage he has written two books, is a multiple award-winner, YouTube blogger at large and senior communications manager for content at Coca-Cola.

Julius Malema was not as lucky as Dlanga. But he was as tenacious, if not more so. His tenacity saw 13-year-old Malema make his way from Polokwane to Johannesburg in 1993, to attend the funeral of the assassinated Chris Hani.

Malema’s biographer, Fiona Forde, in An Inconvenient Youth, suggests that Malema was badly hurt by the exposure of his poor matric results. She also notes that “he is extremely clever”. Malema, who was brought up by his mother and grandmother, never gave up on education. What the education system could not give the young Malema, he found in the student organisation called Cosas and later in the ANC Youth League. In 2010, he completed his diploma in youth development through Unisa.

On March 30 this year, Malema graduated with a bachelor of arts degree at the same institution. He is now enrolled for an honours degree in philosophy. His CV includes the establishment of the third-biggest South African political party, the Economic Freedom Fighters.

Has the post-apartheid higher education system failed totally? No. The capacity of the post-school system has been greatly improved. The enrolment figures have doubled since 1994 with black and women students constituting the majority.

Our research output numbers have grown over time. So has our aptitude for benchmarking ourselves against institutions considered to be some of the best in the world. But, as these personal stories demonstrate, by most measures our progress is neither remarkable nor perfect.

The enrolment growth has not put a serious dent in the low participation rate of black students in the system. The system is bedeviled by high attrition and non-completion rates, especially for black students. Nor has it radically altered campus culture and made it more inclusive. Campuses are still saddled with alienating symbols and culture, exclusionary linguistic and other practices, racism and abject student poverty.

The technical and vocational education and training colleges are yet to find their historic mandate and be equipped enough to fulfil it.

Less than 10 out of the 26 universities are eligible to participate meaningfully in the leading global university ranking agencies. And yet, as university fees have steadily increased, the least resourced universities, with little chance to attain global rankings, are the ones left to cater for the poorest and least prepared students. Nor are the highly ranked universities necessarily the most transformed.

For all the growth in research quality and quantity, black South Africans contribute less than 30% of the national research output. A system whose most productive researchers are white men who are approaching retirement runs a serious risk of rupture in the next decade or so. Black people constitute less than 15% of the professoriate. To date, the scarcest species in the higher education sector are black women professors.

Each of the persons cited in this article has a lesson to teach us about our higher education system. Each of them speaks of their tenacity and a deep love for learning, which finds little space and support for expression in our current system and its institutions. They expose many gaps in the architecture of our post-apartheid education system.

To conclude, I quote Dlanga on the inhospitable nature of the current higher education system: “I felt penalised by the system for being black and poor … Even though the system had now been opened to me, and people like me, it wasn’t designed to accommodate me.”

May other students learn of tenacity and the immeasurable value of education from the likes of Dladla, Wa Azania, Dlanga and Malema.

Professor Tinyiko Maluleke teaches at the University of Pretoria. Follow him @ProfTinyiko