EFF manifesto: A plan for the people 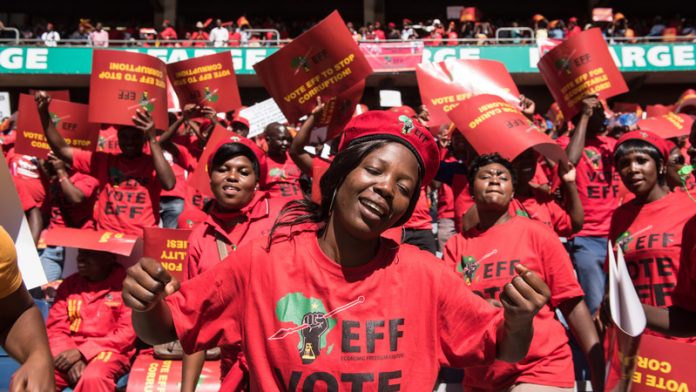 It is 8am at Orlando stadium in Soweto. The smell of braaied meat fills the air as local businessmen and women prepare food for thousands expected to attend the Economic Freedom Fighters (EFF) manifesto launch later in the day. Some of the business people have been at the stadium as early as 4am to prepare for the day. The EFF event presented a unique opportunity for many small businesses coming from near and far to make a substantial profit – more than any other normal day.

Dressed in a red-branded EFF T-shirt, Nhlamulo Mayimele appeared anxious when the Mail & Guardian arrived at her makeshift stall outside the stadium.

A mother of two, Mayimele travelled for over five kilometres by foot carrying her stock in a wheelbarrow to the stadium. Her stall only has a few snacks – iced juices in a bucket, cigarettes all placed on a black plastic on the ground. Mayimele left her children at home and despite feeling ill, she was determined to come to the stadium to cash in on the thousands of EFF supporters coming to attend the manifesto launch. Just a stone throw from Mayimele, Lydia Maluleka and her two nieces are hard at work preparing food for the crowd of hungry fighters. Maluleka says she travelled all the way from Tembisa to make use of the opportunity presented by the EFF event to make a profit. By 6am, she and her two nieces were at the stadium, selling tea and baked scones for R10 a packet.

“I am here because I want money, I am working hard to get it. I am here for business, that’s why I’m here.  I’m hoping that there will be something different coming from EFF – I’m tired of poverty,” says Maluleka as she is busy cutting cabbage. Originally from Giyane, Limpopo, Maluleka, like most people, came to Johannesburg for better economic prospects, but has since found none.

“My son matriculated in 2012 and can’t get a bursary to go to school,” Maluleke says. With the little money that she expected to make from the EFF event, she is hoping it will help contribute towards her son’s education.

One of Maluleka’s nieces, Hope Radebe, says she was excited to come and assist her aunt.

“I took a taxi yesterday after school from Mamelodi to Tembisa to help my aunt. We were cooking all night and only slept for an hour at 4am before we made our way here. We are tired but this is where I want to be,” Radebe says. Her cousin Lindiwe Radebe is unemployed and says that she is an unashamed EFF supporter.

Just next to Maluleka’s stall is Zandile Twala, an elderly woman who has been plying her trade at various stadiums for some time now, says she came to the stadium with the hope to make money.

“Its purely business, for me. I am too old to be running around politics,” she says. She was due to go to Limpopo late on Saturday to sell there with an organised group of women, “We travel a lot”.

A calm looking Twala sits next to her table with cool drinks, snacks and cigarettes displayed. She has two children and three grandchildren who all support different political parties. At home, everyone has their own party.

“I don’t support anything anymore, I know the ANC has too many things going wrong.  We expected that it would be this bad – but I think they might come right some day.” says Twala.

10 points from the EEF manifesto