Domestic workers labour on over injury 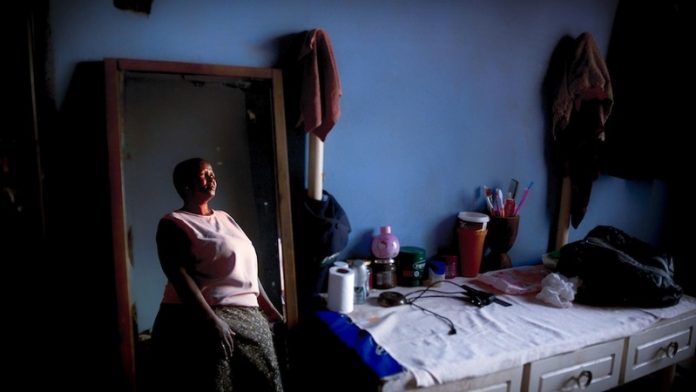 Years after the government promised to ensure domestic workers injured at work would get compensation, those who suffer debilitating accidents still end up unemployed and penniless.

The South African Domestic Service and Allied Workers Union (Sadsawu) and the Wits Law Clinic are taking legal action against the department of labour, to push for the inclusion of domestic workers in the Compensation of Occupational and Injuries Act.

Myrtle Witbooi, Sadsawu general secretary, says that, although strides have been made to protect domestic workers, their consistent exclusion from the compensation Act is irrational and unconstitutional.

In 2011, the International Labour Organisation met to adopt Convention 189, which laid out decent working conditions for domestic workers, specifically encouraging governments to put measures in place to “ensure workers’ occupational safety and health”.

Two years later, says Witbooi, South Africa ratified the convention, promising “that the compensation Act would be extended to domestic workers within the same year”. Instead, the union has had to continue its fight, which began in 2000, to get government to fulfill its promises.

Three pieces of legislation protect the rights of employees, including domestic workers – the Labour Relations Act, the Basic Conditions of Employment Act and the Unemployment Insurance Act.

But domestic workers who work in private homes are not covered by the compensation Act. If a person employed privately is injured at work, their only recourse is to make a civil claim under common law – a costly exercise in which the onus lies on the domestic worker, or her dependents, to prove to the court that she was injured at work.

Thulani Nkosi, a labour law attorney at the Wits Law Clinic, says the Act is meant to protect all employees who sustain injuries or pick up an infection while at work. Referring to the government’s delay in including domestic workers in the Act, he said it was “discriminatory and irrational”.

“We don’t understand what is the rational basis [for their decision] – why they should exclude domestic workers for this long,” says Nkosi.

When asked about the legislation, the newly appointed commissioner for the Compensation Fund, Vuyo Mafata, said the department has just concluded a socioeconomic study on the compensation amendment Bill.

“We will now be starting the public participation process and Nedlac [National Economic Development Labour Council] consultations,” he said, adding that he expected to present the amended Bill to Cabinet this month.

Mafata said certain “amendments [which] required some bit of research and consultation with relevant parties to ensure that we do not miss anything” had also delayed the process. “The Bill is, however, envisaged to be tabled in Parliament in the current year,” Mafata concluded.

This contradicts a statement made in 2014 by Labour Minister Mildred Oliphant, when she told domestic workers at an imbizo in Soweto that the Act was already being reviewed by Parliament, and would be amended soon.

But Mafata maintained “the Act never went to the National Assembly – it’s only now that we are finalising it to take it to Cabinet now in May”.

Meanwhile, Nkosi said the department has opposed Sadsawu’s high court application. “They did not raise any operational issues, but rather said that they are looking into it as government.”

‘When I got hurt, Mr Kotze fired me like a dog –
after 21 years of service’

Nonhlanhla Mndebele would leave her home at 5am and travel from Braamfisherville, on the outskirts of Soweto, to start her daily duties at her employer’s six-bedroom flat in Johannesburg at 6am. Her trip involved two taxis and a long walk over Constitutional Hill in Braamfontein.

“I worked for that man for 21 years and when I got hurt he fired me like a nothing – like a dog,” she says.

Mndebele was 36 when she started working for Mr Kotze as a domestic worker in 1992.

“He didn’t like me using the washing machine or vacuum cleaner to clean, so I had to get to work early to wash all his clothing by hand, and go on my knees to polish and shine the long passage running through the flat,” she recalls.

Mndebele says she started to notice a change in her employer after a series of job losses, which she believes led to his drug addiction. “I would find him sitting on the floor on a Monday looking as though he was drunk but there weren’t any beer bottles around. And when it was time to pay me, he would run away or just pay me half,” she says.

He would also send her to buy beer from the local bottle store first thing in the morning. It was on one of these runs to the bottle store, in 2013, that Mndebele was injured: “I came in in the morning as per usual, and he gave me R200 to buy him the beers. While walking down the stairs, stressed about how this trip would delay my work, I skipped a step and fell headfirst, landing on my chest. The security guards and the gardener helped me up, seeing how badly I had hit the floor.”

She says that Kotze’s only response when she told him was “Aw”, after which he “carried on his way without a care in the world”.

Mndebele dismissed the incident but in the morning she had unbearable chest pains and began coughing up blood.

“At the clinic they thought it might be TB, but when they checked they found that it wasn’t. It was only after I was admitted to Jo’burg Gen [Charlotte Maxeke Johannesburg Academic Hospital], that an x-ray showed that I had crushed a part of my chest close to my heart, which is what was causing all the pain and blood,” she says.

Mndebele spent a month in hospital and another two weeks recovering at home. She is no longer able to walk up and over Constitution Hill as she did during the years she worked for Kotze. She also has to take medication every day – medication she can’t afford.

She says that attempts to get her job back – by approaching the labour department – amounted to nothing. “A man by the name of Terence, from the department, arranged a meeting to mediate between Mr Kotze and me.”

Mndebele says she was sent to another room while the two men spoke. “Terence told me that I would hear from him soon, but till today I haven’t heard a word. Instead, I was told that Mr Kotze has hired about six people to replace me since,” Mndebele adds.

Contacted for comment, the department of labour said they would investigate the matter.