Horseman: The stuff of legends 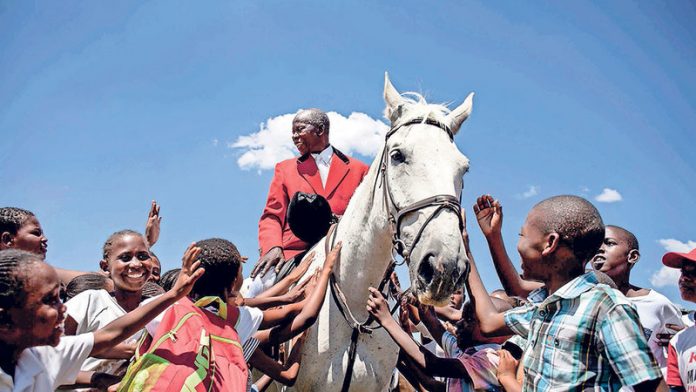 As a child, Enos Mafokate would break off branches, spend hours painstakingly sanding them down, and then use them as make-believe “horses” to ride around the yard.

But his memory of the first time he rode a real pony is indelibly etched in his mind. “I was nine or 10 and I was riding our family donkey, Dapur, going to fetch our cattle, when I crossed paths with a white child riding a pony.”

They had an innocent exchange, not marred by the very real constraints of that time – it was 1954, with apartheid in ascendency.

“The white child spoke to me and told me he never rode a donkey, and asked if he could ride mine.” The boys decided to swap animals. “It was a challenge because I didn’t know what to do with the bridle and saddle. But the kid helped me – he showed me where to put my feet and how to sit.”

They were both sitting on their new charges when the white child’s father arrived on the scene.

Apoplectic with rage, he screamed at Mafokate to get off the pony, and told his child: “My kind ry nie op ’n donkie van ’n swart man nie!” [My child does not ride on a black man’s donkey!]

Word travelled fast. Friends of Mafokate’s dad witnessed the exchange and told him about it. When Mafokate arrived home, he was given a hiding. His father painted a scary scenario, telling him that he could have gone to jail for what he had done.

“As a child, I couldn’t see what was wrong. I thought the elders were the ones that had the problem. I blamed that child’s father and mine for instilling this fear and making us to see that we were different,” says Mafokate.

But it was the simple, daily experience of riding faithful Dapur that planted a seed in Mafokate’s mind – he wanted to become a horse rider.

Seven years after the pony incident, he began working as a groom. One day, unable to resist the temptation, he decided to ride a grey horse named Don Pedro, but had no idea how to saddle up the horse. The ride was disastrous. “I pulled on the reins but they moved in the opposite direction!”

Mafokate nearly had a fatal accident. But, more importantly, his employer, Lesley Taylor, had seen him. Expecting the worse, he was surprised when Taylor offered to teach him how to ride.

Soweto Equestrian Centre ­member Hlobisile Mashaba ­glows with pride after winning a ­trophy during a ­competition in Cullinan earlier this year – one of many won by riders from Mafokate’s centre. (Oupa Nkosi, M&G)

Fast forward and Mafokate’s life has been the stuff of movies, from his beginnings as a groom in a sport dominated by white people to becoming an internationally acclaimed horse rider.

His accolades include receiving the Steve Tshwete Lifetime Achievement Award in 2015.

Now 72, Mafokate has thrown himself into running the Soweto Equestrian Centre, his brainchild. It opened its doors in 2006 to previously disadvantaged children who would not otherwise have the means to pursue their dreams of riding a horse.

In 2014, two of the school’s students represented South Africa at a vaulting competition in France.

Fifteen-year-old Nhlanhla Vilakazi was hooked as soon as he visited the centre, the first in any South African township, and saw black children riding horses.

“I was surprised that there was such a school in Soweto,” he says. A year on, there’s no turning back for Vilakazi. “Initially, I thought horses did not have much character but, as time passed by, I realised that horses like people,” he says.

The school also works with disabled children from different foundations and clinics.

Smiling, Mafokate assures me that “horse therapy is very good. If a child cannot walk or talk, after a couple of sessions, you will see that child starting to use her hands or moving her mouth.”

But the school has been faced with many challenges. “Being a black owner, more especially working with horses, is very difficult,” says Mafokate. His pension does not go a long way towards covering the costs. “Everything needs money. We struggle to enter competitions, feed horses, travel and take care of the centre.

“I pay my assistant with the pension money I get. I don’t do this thing for me. People should understand that. I do this for these children,” he says.

Despite the many challenges, Mafokate remains hopeful. His plan is to see the centre develop into a multipurpose venue that will cater for indoor horse jumping, polo, boxing, bowling, netball, soccer and a meeting place for the community.

“Because of the big space, this can be achieved,” he says with conviction. For him, it’s a very real possibility.

As one of his students, Hlobisile Mashaba, puts it: “He is a living legend and I have certainly learnt a lot from him.”