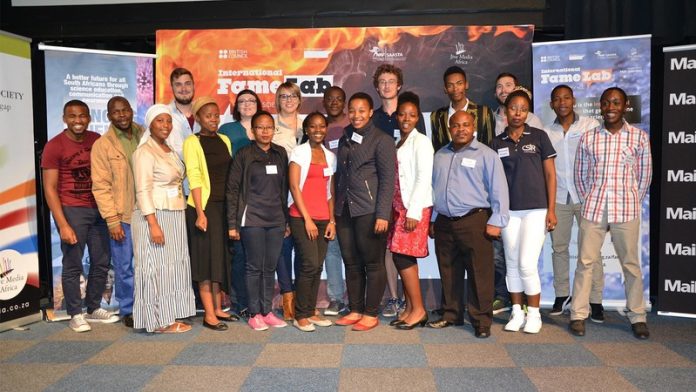 “If you can dream it, you can do it” — Walt Disney

Taime Olivier is part of a dynamic Animal TB research group at Stellenbosch University, where she investigates tuberculosis in African Lions, looking at how the disease affects their immune responses. Including those bred for hunting and commercial use, lions are not a particularly endangered species; those living in the wild, however, are becoming scarce. Taime’s research could help inform ecological decisions in wildlife conservation.

Charles O’Donoghue is studying an MSc in chemistry at Rhodes University. He has become aware of the scarcity of electricity in Africa, especially from clean energy, and believes in saving our planet with green science. Charles’s research looks at creating cheap and reliable catalysts for proton exchange membrane fuel cells — a renewable energy source.

“If the generations to come still have a science phobia, then we will have failed to simplify and communicate science” — Unknown

Tendai Samkange is a master’s student at the University of the Western Cape, studying pharmaceutical science. He is working on designing polymeric nano-drug delivery systems, with particular focus on infectious diseases. The aim of his work is to prolong the action duration of drugs in the body, and thus reduce dosing frequency and side effects, as well as clearly targeting sites of infection.

“Be on time, be present and bring your best self into the room, or don’t go into the room at all” —  Vusi Thembekwayo

Nozipho Gumbi is doing a PhD in chemistry at Unisa. In South Africa clean water is a scarce resource. The types of pollutants finding their way into our water sources are constantly changing, so newer treatment methods need to be put into place. Nozipho’s research looks at ways of improving water purification, using membrane filters.

“If you were born without wings, don’t let anything to prevent them from growing” — Eeva Roots

Wandisile Sixoto is currently studying his MSc in agricultural extension at Fort Hare University. His research analyses methods of crop production in the Eastern Cape, examining ways of improving production to increase yield and meet market standards, as well as improving the livelihood of rural farmers. Originally from the rural outskirts of the Eastern Cape, Wandisile believes that our childhood experiences should never limit our potential.

“A new scientific theory does not triumph by convincing its opponents and making them see the light, but rather because its opponents eventually die, and a new generation grows up that is familiar with it” — Max Planck

Savannah Nuwagaba is busy doing her PhD in biomathematics at Stellenbosch University. Using biology and mathematics, Savannah’s research aims to understand how the body size of different animals is affected by the time it takes them to catch, eat and digest their food. Because these processes depend on temperature, she believes her research is important given the current climate change debate.

7. Robert Schlegel — Department of biodiversity and conservation biology, University of the Western Cape

“The Earth is not dying, it is being killed, and those who are killing it have names and addresses” — Utah Phillips

Robert Schlegel is doing a PhD in coastal climate change at the University of the Western Cape. As the effects of climate change on the ocean become more pronounced, it is necessary to implement and maintain long-term monitoring systems. To this end, Robert’s work involves developing, implementing and maintaining the South African Coastal Temperature Network.

8. Margaret Siyawamwaya — Department of pharmacy and pharmacology, University of Witwatersrand

“When you go to where your fear lives, your freedom starts to display itself.” — Robin Sharma

Margaret Siyawamwaya is a PhD student at the Wits Advanced Drug Delivery Platform. Margaret’s research examines the implementation of 3D printing in tableting to improve the effectiveness of oral anti-HIV drugs. 3D printing is a recent technique being implemented in the design of pharmaceutical formulations. It enables the creation of medicines that cater to patients’ specific needs.

“Life is too short to have bad wine!”

Marli Louw is currently doing her PhD in the Institute of Wine Biotechnology at the University of Stellenbosch. Marli was presented with the opportunity to apply her knowledge in the wine industry, both locally as well as internationally. Her research focuses on Brettanomyces bruxellensis, or Brett, a typical red wine spoilage yeast. She aims to understand how and why Brett is tolerant to sulphur dioxide, the most commonly added preservative in wine.

Claude Moshobane is from Limpopo Province, and, on obtaining his master’s degree, has defied stereotypes regarding rural impediments. He is now a biosecurity scientist and works as a risk assessment researcher at the South African National Biodiversity Institute, based at the Centre for Invasion Biology at Stellenbosch University. His responsibilities include, among other things, the development of specific risk assessments and performing risk assessments of regulated species in South Africa.

Funeka Nkosi, whose expertise lies among other things in nanomaterials synthesis and electrochemical characterisation, is currently working within the Electrochemical Energy Technologies research group of the CSIR. Her research aims to improve the performance of rechargeable lithium ion batteries used in laptops and cellphones.

John Manamela is currently studying towards his MSc in computer science at the University of Limpopo, where his research examines automatic speech recognition technology. John hopes to improve the current technology. His work is focused on the impact of emotion on speech recognition. This technology will eventually be implemented on our cellphones and computers for our everyday use.

“The sky is not the limit, just the beginning” — Unknown

Nthabiseng Mokoena is a master’s student at North-West University, Potchefstroom, where she is studying computer engineering through the CSIR. Her research is focused on facial recognition technologies. Current technology might not recognise a face if it is not facing the camera directly. Nthabiseng’s research looks at using 2D transformation to correct the rotation of the head.

Songeziwe Ntsimango recently completed his master’s degree in chemistry at NMMU. His research interest lies in targeted cancer therapy. The disadvantage of traditional or conventional chemotherapy is that it often affects healthy as well as cancerous cells. Songeziwe’s research aims to counter these shortcomings by targeting only cancerous cells, improving the effectiveness of the treatment.

Athule Ngqalakwezi is a chemical engineering graduate from the Cape Peninsula University of Technology. She is now working at Mintek, where her research involves formulating catalysts for the automotive industry using precious metals. Car emissions are a global issue, and Ngqalakwezi’s team is looking to reduce these.

“The work on ants has profoundly affected the way I think about humans.” — EO Wilson

David Phair is a PhD student at Stellenbosch University, studying behavioural ecology. His research is on social immunity in ants, looking at behavioural traits that enable ant colonies to fight off the spread of diseases. The findings of this research could eventually aid in the treatment of other colonial species in danger of disease spread, possibly even humans.

18. Bridget Marindi – Department of Physics and Geology, University of Limpopo

“Tell it like it is, for it usually is from within” — Unknown

Bridget Marindi is currently studying her BSc in geology at the University of Limpopo, where she plans to further her research in mineralogy.

Outside university, Marindi volunteers as a science education facilitator at the University of Limpopo Science Centre, where they teach 16–18-year-old learners from the area about science and conduct experiments with them, bringing science to the youth.

“The work of true education is to train the youth to be thinkers, and not to be mere reflectors of other men’s thoughts” — Ellen G White

Donatello Mzilethi is a qualified process engineer at Mintek in the Hydrometallurgy Division. Acid mine drainage is the result of metal and coal mining, which affects our water. Donatello’s work involves developing and incorporating different hydrometallurgical technologies to help solve acid mine drainage. He also spends time evaluating the potential uses and ways of synthesizing graphene to solve various techno-economic problems.

Magashule’s letter, in which he refused to step aside, said he would be appealing his suspension and added that he was “suspending” Ramaphosa. The letter is said to have angered the president.
Advertising