Branding buzz over The Honey 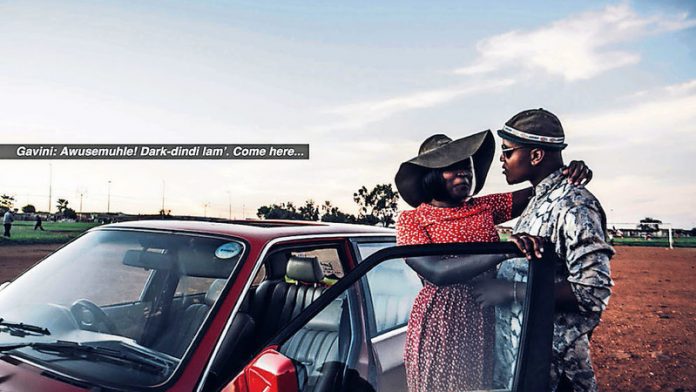 The last post on allhailthehoney.tumblr is an invitation to the J&B Hive in Braamfontein, Johannesburg, to witness The Honey “live off-screen for a day”.

The series of photographic posts features graphic designer and illustrator Rendani Nemakhavhani holding up a bottle of J&B Urban Honey, on which the B in the J&B logo is replaced with a graphic of a bee.

The Honey — a township-themed fotonovela starring Nemakhavhani as Honey and, more recently, photographer and editor Kgomotso Neto Tleane as Gavini — has been receiving internet attention for its tongue-in-cheek township sensibility, its referencing of apartheid-era magazine fotonovelas and, of late, the recontextualising of TV drama series Yizo Yizo.

It seemed Braamfontein’s entire cool cognoscenti descended on the Hive, a creative community and collaboration space with J&B as one of its partners, on Thursday last week.

Nemakhavhani blew kisses, worked the room and kept one eye on the display and sale items related to The Honey. Honey’s outfits and props, Gavini’s Dickies spotty (which she appropriates), her heels, her mbadadas, a sjambok and her two-tone wig were displayed on a low table. Closer to the entrance, somebody was selling prints of photographs from the story for R10 each. The entire event seemed to speak of the power and ingenuity of the DIY execution at play where The Honey is concerned.

Yizo Yizo director Teboho Mahlatsi mused at how they had turned the hit series on its head. “It’s interesting to see them reinvent it as a love story, because there wasn’t a love story in it. There was Papa Action and Chester. They were the partners, in fact.”

This felt neutered, somewhat, by the insertion of J&B into the equation. There was an interview clip of Gavini and Honey being projected during the event. It featured the seated pair answering questions, the screen now and again emblazoned with J&B branding. All the hobnobbing turned it into a silent video.

Rendani  Namakhavhani and Kgomotso Neto Tleane in The Honey. (Supplied)

Speaking to the Mail & Guardian a day later, Nemakhavhani said she had begun working with J&B as an illustrator, which was how the idea to pair The Honey with J&B Urban Honey first came about. “They’ve been trying to get more people, women especially, to start drinking it. So they wanted someone with more weight to get it more known,” she said. “Plus they were giving us a space to showcase.” Nemakhavhani said she had no qualms taking on commissioned work and that The Honey was in no danger of losing its identity because “it will always be its own thing”.

Elaborating on the relationship with The Honey, J&B Hive project manager Trevor Chomumwe says the idea for the night was to help bring about a physical manifestation of The Honey and to do it respectfully, without any in-your-face branding.

“Many people have been asking for a physical manifestation of it and we were coming through to help celebrate the success of its four chapters,” says Chomumwe. He added that the danger of brands subsuming creative ideas in their infancy depends on each individual situation, but caution was taken not to assume creative control of The Honey.

Aside from the 17 creative initiatives they support as the Hive — providing a creative space, film and audiovisual assistance, funding and mentorship — they regularly partner with artists for launches, as they did recently with Lazi Mathebula for his Beautiful Boys season four launch.

As for The Honey team, they seem to have bigger fish to fry concerning using aesthetics to communicate a sense of pride about the histories of transient black people.

More than the J and Bee branding flashing on the projected screen, the one image that remained indelible as I exited the filled-to-capacity room and made my way downstairs was one of Honey’s shoes, on which was written “Village Honey” in black marker pen. It was something of lightbulb moment.