Black graduate numbers are up

As someone who has written extensively about the failings of our education system, I was surprised by the quotes emerging in the media coverage of a recent Statistics South Africa report and even more so by statistician general Pali Lehohla’s comments last week.

Following publication of the report titled Vulnerable Groups Series 1: The Social Profile of Youth, 2009-2014, Business Day wrote that black youths are “less educated now than 20 years ago”. The Daily Maverick ran a similar headline: “Stats SA claims black youth are less skilled than their parents”. There was equally alarmist coverage on TimesLive and by the eNCA and SABC.

Unfortunately Stats SA did not denounce the media’s claims, and the story seems to have grown legs, with former president Thabo Mbeki calling it a “national emergency” and the Democratic Alliance’s spokes-person on basic education, Gavin Davis, speaking about “the collapse of education in poor communities”.

None of this is true. Black youths have attained higher levels of education today than at any time in South Africa’s history. There are more black matrics, more black high-level passes in mathematics and science, and many more black university graduates, both as a proportion of the black population and in absolute terms.

If we cut to the chase, the confusion centres on one strange graph (figure 4.2) that appears on page 64 of the 2015 Stats SA report, Census 2011: A Profile of Education Enrolment, Attainment and Progression in South Africa, and the misinterpretation of what that graph apparently shows – that the proportion of black and coloured youths who graduate with a bachelor’s degree “after completing matric” has been declining for 20 years, although, for whites and Indians, it has been increasing. This does not seem to agree with other data sources.

Unlike when trying to measure things such as the unemployment rate or wages (where you have to turn to household survey data, or the census), when counting the number of university degrees awarded, it’s a little easier. We can look at surveys but we can also look at the higher education management information system (Hemis), which records who has been granted what degree and when.

So what does Hemis tell us about the number of black youth getting degrees over the past 20 years?

Fortuitously, the same question was addressed in a Stellenbosch University economic working paper published last week by Hendrik van Broekhuizen. He shows that, “while the number of white graduates produced annually has increased only moderately from about 27 500 to just over 35 000 in the past 25 years, the number of black graduates produced has increased more than sixteenfold from about 3 400 in 1986 to more than 63 000 in 2012”. 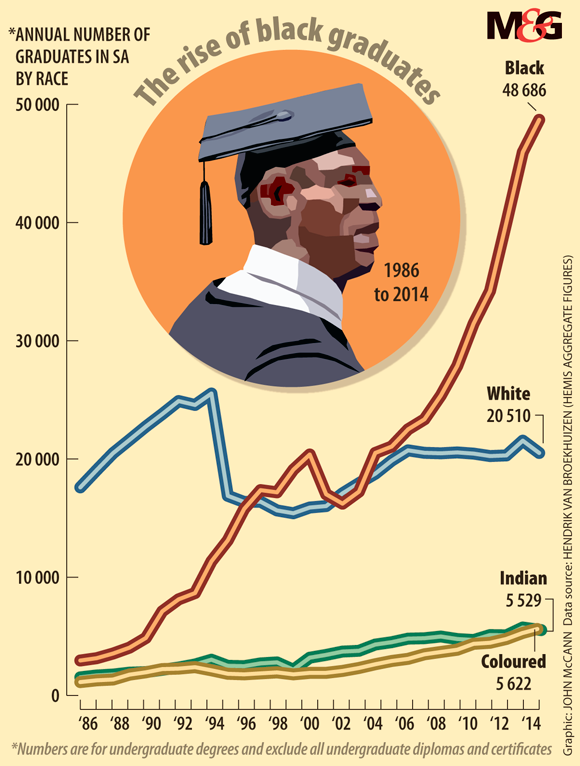 I was particularly interested in degrees rather than diplomas or certificates, and he provided the figures for degrees only by race (see graph on the right). The changes have been equally dramatic. Between 1994 and 2014, the number of black graduates with degrees being produced each year has more than quadrupled, from about 11 339 (in 1994) to 20 513 (in 2004) and 48 686 graduates (in 2014).

Even if one only focuses on the recent period between 2004 and 2014, black graduates increased by about 137% (compared with 9% for whites), whereas the black population grew by about 16% over the same period.

Stephen Taylor, who works extensively in the economics of education field, has shown why Stats SA’s figure 4.2 is so misleading – essentially the increase in black matrics was larger than the increase in black graduates, but both increased substantially. Unfortunately the statistician general has lashed out at Taylor, referring to his critique as “technically incomprehensible and policy irrelevant” (Business Day, May 5).

To avoid a similar riposte, let me be clear: black graduates have more than doubled in the past 10 years. The black population hasn’t. Therefore, black youths are more likely to get degrees now than they were 10 years ago.

The argument that “black youths are regressing educationally” feeds a dangerous narrative that is not supported by any education data. Not improving fast enough, yes. Regressing, no.

This does not change my view that our education system is in crisis and that we need meaningful reform. The egregious levels of educational inequality between working-class and middle-class families, and between whites and blacks should cause alarm. And, yes, our youth unemployment problem is monumental and unsustainable; there is widespread and legitimate research to show that. But spreading fallacious rumours and causing doubt where there is none helps no one. Several colleagues, officials and I would ask the statistician general to please clarify his comments on black graduates and set the record straight.