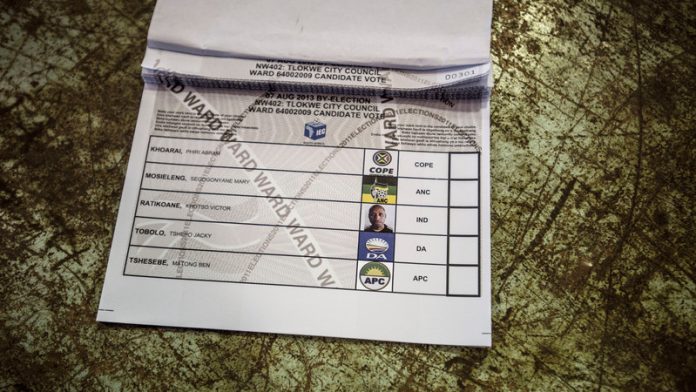 Two hours into a tough session of questioning, the deputy chief justice of South Africa did something almost never seen in the Constitutional Court: he effectively told a senior advocate to shut the hell up.

“Your position is astounding,” Justice Dikgang Moseneke told the advocate for the Independent Electoral Commission, Wim Trengove, on Monday. “We don’t have to debate it now.”

Perhaps because of the mildness of Moseneke’s tone compared to his words, Trengove showed every intention of pushing his case. “May I …” he began tentatively — but Moseneke slammed the door in his face.

“Your views may be interesting but I think the matter is settled,” Moseneke said, this time with no equivocation.

Trengove visibly took a second to consider the matter, then another. Then he did the only thing he could, in the ConCourt’s rules and traditions.

“Well, then I have no further submissions to make,” he told Moseneke meekly.

Without certain pieces of legislation to hand, the lay person would have found it impossible to tell what had so riled Moseneke, cloaked as it was with references to “section 16 three” and how one Act applies to another.

But a rustle of agitation seemed to blow down the benches of legal representatives arrayed before the court where those still to bring their arguments about the fate of the upcoming local government elections were seated.

It was, perhaps, in part simply because of how close Trengove had come to a verbal altercation with a sitting judge of the court, and to questioning a previous judgment of that court.

But it was also, at least in part, because the IEC’s legal gymnastics had just reached a point where it suggested that the overseers of elections wanted to maintain — or perhaps even create — loopholes that would make it impossible to prevent municipal by-elections from being stolen.

Municipal by-elections, as counsel for the Democratic Alliance would later tell the court, are uniquely susceptible to theft by bussing. In national and provincial, and even normal municipal elections, voters who vote outside their registered home areas pay the price.

The obstacles to voting more than once are nigh insurmountable, requiring the defeat of several systems built to prevent just that, including the very low-tech but very effective indelible ink on the thumb.

And so any voter bussed to a different province, or local ward, from where they live means one less vote in their home province, or ward.

In by-elections there is no such cost, advocate Anton Katz told the court on behalf of the DA.

“In a by-election, that voter who is now bussed doesn’t now lose his or her right to vote in the correct ward,” Katz said, suggesting that a voter bussed into a ward for a by-election happening between regular elections would go back to his or her home ward for the normal election.

That lack of disincentive to, say, bus a great many known supporters of your party into a by-election, is no longer a theoretical problem. At the heart of the arguments on Monday was a by-election in the Tlokwe municipality, centred on Potchefstroom, previously declared to have been not free and fair. In one subsequent investigation the IEC found about 1 600 voters who it considered registered in the wrong ward.

It was never determined who was responsible for the incorrect registrations.

Tracking down the instigator might be hard, but detecting such shenanigans should be easy, at least after the fact. By law, the IEC must make available the entire voters’ roll, or any segment of it, at any time to anyone who pays a nominal fee. A simple database search would soon show up voters who hop wards, making them liable for prosecution, and rigged elections liable to challenge.

But the voters’ roll referred to in that section of the election law, Trengove argued on Monday for the IEC, is simply a list of names and identity numbers, and specifically excludes addresses. With this argument too Moseneke had some trouble, but the exclusion of addresses was crucial, the government later insisted, to protect the privacy the Constitution guarantees.

That makes things a little more complicated, and limits the ability to act on bussing-type voter fraud to political parties alone. Anyone may object to the inclusion of an individual in the voters’ roll, and a list of identity numbers across different wards will show up ward hopping. But the onus to prove fraud is entirely on the party doing the objecting. And such an objection requires that notice of it must be served on the person who should not appear on the roll. No address means no notice can be served, so no objection can be validly lodged.

In 2003, however, Parliament added a special provision to the same law for “all registered political parties contesting the elections” to demand copies of the voters’ roll — this time with addresses specifically included.

The law threatens dire consequences for any party that uses such an address-enriched voters’ roll for anything other than “election purposes”, but on Monday the ConCourt seemed happy to accept that checking for election fraud would fall under that ambit. So, in theory, a member of the public who detects a ward-hopping ID number could alert a political party, which could get hold of an address and act.

That is, if an address is available. At the heart of the argument before the court, which may determine whether local government elections can go ahead on August 3 as scheduled, the IEC held that it could not possibly have valid addresses for all voters on the roll until 2020, though it accepts an implied duty to get that house in order.

“The DA is very concerned about the by-elections that will happen between 2016 and 2019,” Katz said later.

That would still leave a solution to the by-election loophole in sight, if too far away for the comfort of all parties.

But then Trengove yanked away even that, earning the verbal slap-down from Moseneke. The provision that parties must be given voters’ addresses should not apply to municipal elections at all, he started to argue, but only to national and provincial elections — elections where they are far less important.

“It’s totally astounding,” Moseneke told him, in a fashion that bodes ill for the IEC in the judgment the court is expected to deliver on the matter soon.

Zuma petitions SCA in another stab at arms-deal acquittal