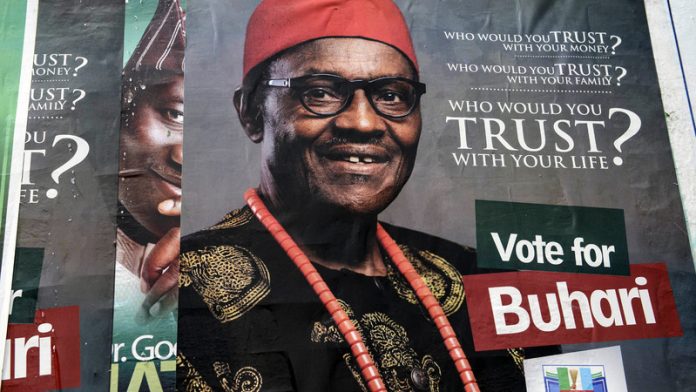 Of all those in London at this week’s conference on combating corruption, the show was stolen by Nigerian President Muhammadu Buhari, who cut a dapper figure in his hat and robes.

There were several heads of government, including British Prime Minister David Cameron and Afghan President Ashraf Ghani, whose country ranks third from the bottom on a corruption scale published in January by Transparency International. Nigeria has a score of 136, with Somalia last at 167.

The lower third of the list is dominated by Africa, with only Botswana ranking in the top 30. South Africa comes in at a lowly 61 on the corruption scale, but President Jacob Zuma did not attend the summit.

What made the Nigerian president stand out was his pledge to clean up one of the world’s most bent economies. After a year in power, he has passed new laws and set up teams to arrest those who launder money and plunder the billions Abuja receives in aid.

For half a century every leader of this former British colony has set out with supposedly good intentions, only to make little or no change. As one member of the British team remarked privately: “It’s rather like us passing laws against the weather.”

There were fears the conference could be scuppered after Cameron, not realising a nearby microphone was on, described Nigeria and Afghanistan as “fantastically corrupt”. Buhari said the comment had left him “shocked and embarrassed”, but he went ahead with his speech.

He has run Nigeria before when, as a general, he overthrew an elected government in 1983, only to be forced out in another coup two years later. Back then, he declared war on graft but spent his time jailing journalists and cracking down on human rights.

He also served in the dictatorship of Sani Abacha, whose rule was so severe that the Commonwealth — led by a protest from Nelson Mandela — suspended Nigeria until after Abacha died in 1998.

Last year, Buhari defeated Goodluck Jonathan in the first democratic change of power since independence in 1960 and has shown little sign of reverting to his old ways. Nigeria is perhaps now more free than at any time in its history.

In London he laid out a plan starting with the oil sector, in which, from now on, all contracts will be open to public scrutiny. Despite being Africa’s largest oil producer, Nigeria distills very little of its own fuel, with money lost to corruption both in the export of crude and the reimport of petrol and diesel. Last month, traffic was brought to a standstill when filling stations ran dry.

But the president has also made himself minister for petroleum resources. On the one hand, the buck now stops with Buhari, but on the other it leaves him vulnerable to rumours. Nigerians equate oil with theft, so the minister of that portfolio is always assumed to be on the take.

And ahead of his arrival in London, the press castigated him after he decreed that government officials should no longer enjoy large travel budgets, only for his daughter, Hanan (16), to be spotted in first class on a British Airways flight between Abuja and her £26 000-a-year private school in England.

Despite his harsh approach to human rights in the 1980s, back then Buhari was praised for reducing the budget, curbing inflation and slashing the bloated public service, and appears to be on the same mission in 2016. Nigeria has some of the highest-paid civil servants in the world.

But at least one of his ideas may worry his fellow presidents. Buhari has proposed an African recovery base to be set up in Abuja, where the billions stolen by leaders and their cronies anywhere on the continent could be tracked and brought home.

He also announced plans to release a list of Nigerians living in London who are alleged to have made their money from dodgy deals. Britain has pledged to help with arrest and prosecution.

Ironically, the accused might welcome being tried in a British court with a good chance of getting bail. Nigerian jails rank among the worst in Africa.

At his inauguration a year ago this month, Buhari swore a presidential oath on the Qu’ran, then promised, “There will be no paying of old scores.” Even so, arrests seem to have focused on people opposed to his ruling All Progressives Congress or APC.

Prominent among those under investigation is one-time oil minister Diezani Alison-Madueke, allegedly linked to a slush fund of more than $100-million set up to help then president Goodluck Jonathan contest last year’s vote.

Every day the media in Lagos has new reports of those it claims have swindled the country while members of Jonathan’s former staff, Cabinet and even his family have either been arrested or added to a seemingly endless list of suspects that includes some from the APC.

Prosecution has been slow and a court backlog could mean that cases will take years to resolve.

A special squad known as the Economic and Financial Crimes Commission roots out corruption, with powers beyond those enjoyed by the Hawks in South Africa. Prominent members of the military, once regarded as untouchable, have been picked up, raising the question: What about Jonathan himself?

In a country high on paranoia and divided along religious and tribal lines, with a Muslim north, Christian south and some in the east threatening to secede altogether, this could be risky.

Buhari is from the north and many of those arrested are from there as well, but Jonathan was born in the south. Others belong to a mix of tribes including the eastern Igbo, who tried to secede in 1967 as the Republic of Biafra, leading to the death of an estimated two million people in what scholars now view as genocide.

The current fight is with Boko Haram in Buhari’s heartland and, despite his assurance that the war is being won, more than 200 young women from a Chibok school are still missing after the terror group seized them from their hostel in April 2014.

At 73, Buhari is unlikely to get another go at the top job beyond his constitutional two terms. That’s if he is re-elected in 2019. Although news of his reforms has gone down well, if a vote was held tomorrow he would be unlikely to repeat last year’s victory where he outpolled Jonathan by 9%.

His plans laid out in London are clear enough but critics say everything in the new government takes too long and the president is prone to dither: he took six months to select his first Cabinet.

One problem has been his love of travel. In 12 months Buhari has averaged almost one foreign trip a fortnight, leaving little time to govern a country of 180-million people, oversee a Cabinet, run his own oil ministry, fight Boko Haram and end corruption.

While in London, Buhari may also need to calm his hosts on the matter of money. Nigeria is the largest recipient of British aid but a recent report alleged that some of the funds earmarked for the country’s war on terror have been used to harass political rivals.

With a forecast for “clouds and a chance of showers” in London on Friday May 13 as the conference winds down, the British weather may prove easier to predict than the future of Buhari and his plan for a new Nigeria.