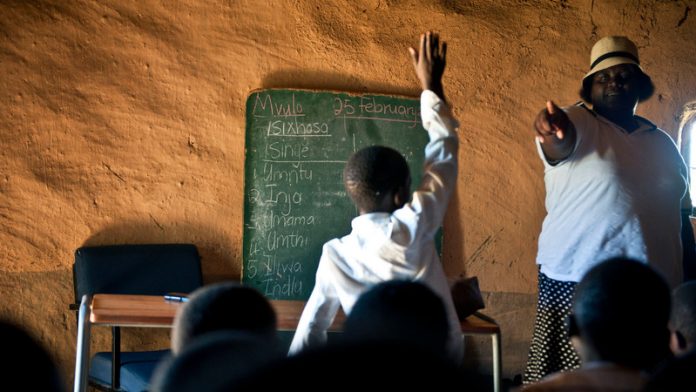 By the time most learners in poor schools reach the end of grade 3, the chances of them achieving a good matric pass is unlikely. It’s the education system that fails them and sabotages their chances of doing well in matric – and after they’ve left school.

These are the findings of a new study of learners’ performance in the 2012 and 2013 annual national assessments (ANAs) by Servaas van der Berg of Stellenbosch University.

The ANAs, which assess children’s literacy and numeracy skills, are targeted at grades 1 to 6 and grade 9.

“Current policy interventions informed by the ANAs target poor performance in maths in grade 9. This is taking the wrong message from the ANAs. Our research shows that the damage is done long before grade 9.”

Van der Berg, a socioeconomic policy researcher in the university’s economics department, stated: “It appears that the flat learning trajectories experienced by children attending poor schools sabotage their chances of doing well in matric and therefore their future careers.”

Van der Berg’s analysis of the results showed that the learning gap between children from rich and poor schools is already “very wide” by grade 4.

“Most disturbingly, grade 4 results across the system look similar to those for the bachelor’s pass in matric. This implies that potential access to university, with all the advantages that such access confers in the labour market, is largely predetermined by grade 4.”

His assessment – spelled out in a six-page policy brief – has been endorsed by academics from the country’s top universities as well as by Nick Taylor, the former head of basic education department’s national education evaluation and development unit.

“The department of basic education seems to have come to the conclusion, on the basis of ANA scores, that things are largely fine in the primary schools and that the problems of inequity of performance outcomes appears in high schools,” says Taylor.

“Professor van der Berg’s analysis demonstrates convincingly that this is wrong, that inequities begin in the very first grade and become increasingly entrenched with each passing grade.”

Taylor, a research fellow based at Jet Education Services, added that it was “difficult to make up these backlogs”. “It’s indeed impossible under present conditions, and by the end of grade 3 a learner’s life chances have largely been determined – in the first instance, through the circumstances into which they were born and second, through the poor schooling they receive.”

Van der Berg said in his report: “The results for both 2012 and 2013 point to large learning deficits that have left their mark by the middle of the primary school years. They show that for most children, catching up and getting back on track is not a realistic prospect.”

He found that by grade 4 most learners in poor schools were “no longer on track”, with the “learning deficit” increasing slightly more in subsequent grades.

The ANA data confirms that South African children perform weakly “in terms of cognitive outcomes”, the study found. “These children are unlikely to make up for early loss of ground in school or backlogs that may have built up even before they started school.

“For most of them, learning deficits are so bad by the middle of primary school that many doors have already closed for them. Efforts to repair the damage at higher grades are important and must continue for the sake of those who may still benefit from them.”

Ursula Hoadley, an associate professor in the school of education at the University of Cape Town, agreed that the damage “is most likely done” in the foundation phase of schooling. “This is because grade 3 represents the end of the formal teaching of the two key fundamental skills on which the rest of schooling rests: learning to read and learning to count and calculate.”

He said that Van der Berg’s argument about the correlation between academic performance in the early and later years of schooling didn’t mean that there aren’t exceptions. “There are learners who really begin to improve in later years of school. Overall, however, the number of these outliers is likely to be small.”

Nic Spaull, a research fellow at the universities of Johannesburg and Stellenbosch, said there was a large body of research that supported Van der Berg’s findings.

He said that for most learners it was “unfortunately true” that a good matric pass was likely to be “already unattainable” by the time they reached the end of grade 3.

“All of the evidence points to the fact that children are acquiring learning deficits early on in their schooling career and that these are the root cause of weak learning outcomes in later grades,” he said.

“I think this policy brief highlights the tragic reality that children’s life opportunities are, to some extent, already determined by the age of nine. We need meaningful interventions in the foundation phase [grades R and 1, 2 and 3] for there to be significant improvements in educational outcomes for the poor,” Spaull added.

Reacting to Van der Berg’s research findings, Elizabeth Henning, a professor of educational linguistics at the University of Johannesburg, said the mantra of UJ’s flagship programme in childhood education was: “Matric begins in grade 1.”

Henning said the preschool years were crucial and that “maybe that is where the socioeconomic factor kicks in to severely jeopardise a child’s future”.

“The grade 4 ‘slump’ may be averted if teachers know more about the learning and development of children in the foundation phase. So, poor children may have a chance if we can assist their teachers to see kids as learners: individual young humans who are learning to learn.”

Equal Education general secretary Tshepo Motsepe said Van der Berg was “spot on” with his assertion that while efforts to remedy the damage in the higher grades are important, the biggest effort is required in the early school years, if not before.

“Matric begins in grade 1, and in grade R and in ECD [early childhood development] classrooms. It is in these classrooms, in townships and in rural areas, that we need young and well-qualified teachers.”