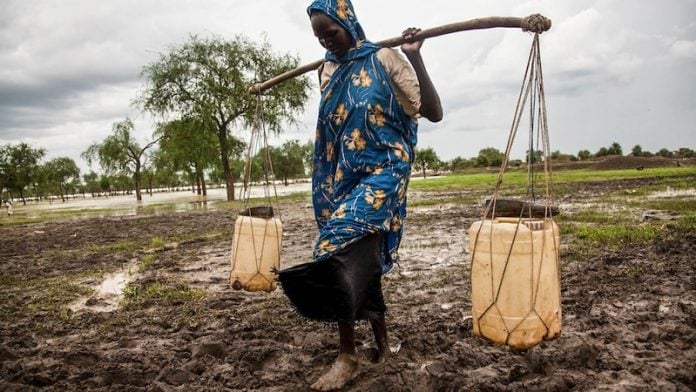 Martha Nyimun, 35, wipes the sweat from her brow. She’s breathing heavily but doesn’t slow down.

With the sun blazing from a cloudless sky, Nyimun is walking to the only piped water in the Gabat neighbourhood of Juba, where she lives.

At the distribution point, one of the few in the capital of South Sudan, she pays SSP4 or about R2.51 to get 20 litres of clean water. The queues are long and, with the heavy container balanced on her head, it takes Nyimun more than an hour to get back to her four children.  The water barely lasts a day.

“Sometimes I don’t have enough water for washing or even for cooking. I usually have to beg for water from neighbours and when they don’t give it to me, my children cry because they can’t get water to drink,” she explains.

Nyimun can’t afford to buy water regularly. She is a single mother and never went to school. Now and again she gets an odd job at a restaurant for which she’s paid SSP30 or about R15.60. When she runs out of clean water, she uses untreated water from the river Nile, taking the risk of contracting diseases such as cholera.

Nyimun, like many Juba residents, has little choice. In the decades of conflict the urban water systems have been neglected or destroyed.

One in three people use contaminated water and only 2% of households have water piped to their homes, yard or plot, according to the 2010 South Sudan Household Survey, released in 2013 by South Sudan’s Ministry of Health.

There is little or no infrastructure in rural areas. Many boreholes have been deliberately destroyed in the conflict. Girls of 15 years or younger are responsible for fetching water. They sometimes walk up to four hours to fetch water, often from a dirty swamp.

“We see a lot of gender violence, a lot of attacks on women.”  According to the United Nation’s Children’s Fund (Unicef), being “needed at home” is a major reason children, especially girls from poor families, drop out of school.

Nyimun has to leave her two youngest children — aged five and eight — at her hut when she fetches water. It’s too far for them to walk, “but soon they will have to start helping me and I might not be able to keep them safe”, she says.

Tim Irwin, communications officer for Unicef in South Sudan, says the country’s worsening economic crisis and rising fuel prices have more than doubled the cost of delivering water, sanitation and hygiene services. “Even the water treatment centre in Juba is running out of supplies, running out of fuel to keep the power going, the generators going.” This directly affects families’ health. “We see diseases such as cholera and typhoid spread,” he explains.

“It is essential that people in cities such as Juba and also in rural areas have access to potable, clean and safe water.”

Unicef figures for 2015 show that 1?818 cases of cholera were reported in South Sudan, including 47 deaths. Cholera is a diarrhoeal disease caused by the bacterium Vibrio cholera and can kill someone in hours if left untreated, says the World Health Organisation. It is spread mainly by faecal contamination of water and food.

Nyimun says she and her children have suffered from diarrhoea and typhoid on several occasions.  The first downpours have already signalled the start of the long and difficult rainy season, which usually lasts from May until October, and aid agencies are bracing themselves for another cholera outbreak.

Juba resident Lesuk Emmanuel Alison sometimes goes thirsty for up to 30 hours because he is terrified of the diseases he might get from untreated water. From time to time his family — he has a wife and two children — don’t eat because they can’t get clean water with which to cook. Like many others, Alison buys water from the privately owned tanker trucks that make their way through the city.

“Sometimes you find that the tanks of water cannot reach some areas in time. You find that some people do not have the money to buy,” Alison says.

Oxfam’s research shows that a person needs at least 20 litres of water a day. “That is just for the most basic needs: you need more for hygiene and cleaning,” says King. A 200-litre container of water costs between R109 and R140 in Juba. Gross national income in South Sudan in 2014 was R15?156 per head, or R41.50 a day, according to the World Bank.

There are no quick-fix solutions here. Political stability is a prerequisite for any long-term improvement, says King. “This country has been at war for 40 of the last 60 years. There is no capacity, limited commitment and no money. The ministries [responsible for water supply] are completely underfunded.”

Infrastructural investment is needed but with the country on a knife edge and its economy teetering, the international community is hesitant to spend money on it.  One exception is the government of Japan. In 2012 it pledged $50-million of aid in infrastructure support. The project includes building a 180?000 cubic litre water distribution plant that will, once it is  completed in 2017, distribute water to more than 400?000 Juba residents.

“This will help prevent the cholera outbreaks every year,” says Muludyang. “The local people will now have public water points near their houses and [it will] stop women from having to travel long distances to queue and buy water — and children having to fetch water from faraway places instead of going to school.”

King says it is important to build capacity in the South Sudanese government. Until now, aid organisations have shouldered much of the responsibility for the crisis. This has included emergency water treatment measures, drilling boreholes and the provision of chlorine.  “Government has to take responsibility for water provision. We need a shift in thinking.” She urges donors not to give up on South Sudan.

“They are tired of putting money into a system that is broken. But that is not the point of being a donor … it is not to help governments. It is to support the people who are caught in a cyclical hell.” — Additional reporting by Adri Kotze