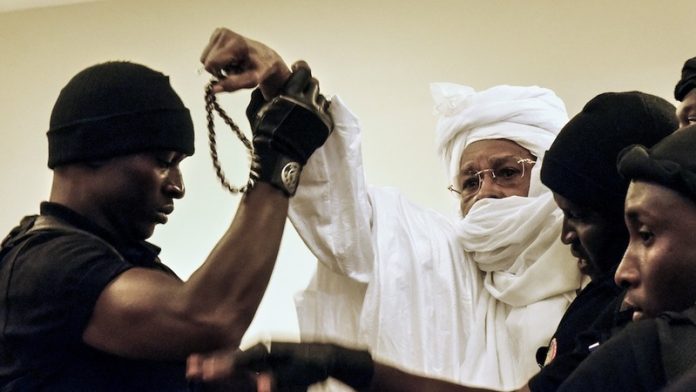 Former Chadian dictator Hissène Habré raised his arms in the air and shouted “Down with Francafrique!”, the term used for France’s continuing influence on its former colonies, as a court in Senegal sentenced him to life in prison on Monday.

He had declined to address the court throughout his 10-month trial, in an apparent show of not recognising its authority. That did not prevent the court in Senegal from finding him guilty of war crimes and crimes against humanity.

Though other African leaders, current and former, may share his ideological disdain for Western influence on the continent, the judgment nonetheless put them on notice – and promised to encourage victims of their excesses to seek justice.

“It’s the crowning achievement of a long and hard fight against impunity,” said Clement Abaifouta, the president of the Habré survivors association, known by the acronym AVCRHH, after the ruling. “Today Africa has won. We say thank you to Senegal and to Africa for judging Africa,” he added.

In the Chadian capital N’Djamena about 250 victims and their supporters gathered to watch the trial on television at their group’s headquarters.

Women shouted with joy when the verdict was read out, embracing one another and crying out: “We won”, before taking to the streets and blocking traffic as they spread the news.

The precedent set by the verdict could be seismic, according to legal analysts, especially after years of criticism that the International Criminal Court (ICC), based in The Hague, has tried African leaders many say should be judged on the continent.

The United Nations High Commissioner for Human Rights, Zeid Ra’ad Al Hussein, said the verdict showed “nobody is above the law” at a time when the world is “scarred by a constant stream of atrocities”.

Reed Brody, a lawyer for Human Rights Watch who has spent the past 15 years working with victims to bring Habré to justice, said the conviction was a warning.

“This verdict sends a powerful message that the days when tyrants could brutalise their people, pillage their treasury and escape abroad to a life of luxury are coming to an end,” he said in a statement.

“Today will be carved into history as the day that a band of unrelenting survivors brought their dictator to justice.”

Habré’s conviction for personally raping a woman was also a first by an international court trying a former world leader, according to Human Rights Watch.

Lawyers for the victims said their next step would be to obtain compensation for their clients in a civil suit.

The verdict brings long-awaited closure for relatives of the up to 40?000 people killed and many more kidnapped, raped or tortured during Habré’s 1982-1990 term as president of Chad.

The 73-year-old former dictator, who wore his trademark billowing white robes and sunglasses in court, had presided over “a system where impunity and terror were the law”, Kam said.

The case was heard by a special tribunal set up by the African Union under a deal with Senegal, and is the first time a country has prosecuted a former leader of another nation for rights abuses.

The United States Secretary of State, John Kerry, said the conviction was “an opportunity for the United States to reflect on, and learn from”, its involvement in Chad, referring to the US and France’s backing of his regime as a buffer against Libya’s Muammar Gaddafi.

A European Union spokesperson said the “historic” sentence set an “important precedent for international justice and the fight against impunity” and praised the determination of Senegal’s authorities in bringing the case to trial.

Habré has two weeks to appeal the sentence.

Known as a skilled desert fighter, often dressed in combat fatigues to fit the role, Habré fled to Senegal after he was ousted in 1990 by Chad’s current president, Idriss Deby.

Victims were subjected to electric shocks and waterboarding, and some had gas sprayed into their eyes or spice rubbed into their genitals, the court heard.

Habré’s defence team unsuccessfully sought to cast doubt on the prosecution’s argument that their client was an all-knowing, all-powerful head of the DDS, suggesting he may have been unaware of abuses on the ground.

For more than 20 years, the former dictator lived freely in an upmarket Dakar suburb with his wife and children.

“What we have seen today is not justice. It is a crime against Africa,” said Mahamat Togoi, part of a Habré supporters group. “It’s the dirty work of mercenaries in the pay of Francafrique.” – AFP