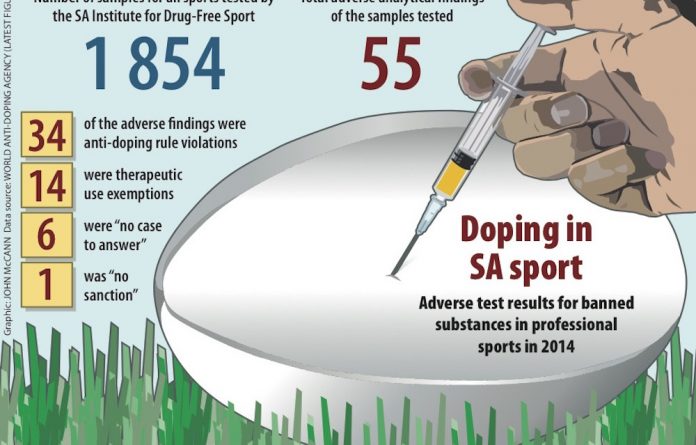 Learners testing positive for anabolic steroids could be suspended from participating in school sport for a year, and those found guilty of selling the performance-enhancing drugs face being expelled.

That is if a new policy is given the green light – which would make South Africa the first country in the world to implement a drug-testing programme for anabolic steroids in state schools.

These are the sanctions that the South African Institute for Drug-Free Sport wants the governing bodies of state schools to impose on errant schoolchildren.

The move to get the institute to conduct testing for banned performance-enhancing drugs at public high schools came a step closer to realisation after a concept document was submitted two weeks ago to the department of basic education’s director general, Mathanzima Mweli, for approval.

This document, as well as another, which the Mail & Guardian has seen, details how principals will have to delegate power to the institute to conduct either random or “with notice” tests on athletes for prohibited substances.

The test would be done after taking into account the best interests of the athlete as well as his or her safety, and would require reasonable evidence to be provided that the learner was using a prohibited substance.

If the proposal is approved, testing for prohibited substances could start as early as next year and would be confined to high schools.

For the first year of the programme, which is a partnership involving the institute and the departments of basic education and sport and recreation, R2?million would be set aside for drug testing and a further R1.75?million for training.

Plans outlined in the concept document include:

Importantly, the coach, teacher or any other staff member who is complicit “in the performance-enhancing substance abuse behaviour of an athlete” will also face a sanction, but this is not spelled out in detail in the document.

The concept document defines anabolic substances as hormone and metabolic “modulators”, diuretics and other masking agents. Urine samples will be taken from the schoolchildren who are tested and then sent to a laboratory accredited by the World Anti-Doping Agency for analysis.

A child who tests positive will be suspended from participating in any school sport until the disciplinary process is finalised. The institute said that, should the programme go ahead, it would not disclose the identity of any child who tested positive or the name of their school, but would use the finding for statistical purposes alone.

According to the protocol, schools would be obliged to inform the institute of any schoolchild suspected of taking, possessing or trafficking in banned substances.

The basic education department’s acting director for the safety in education directorate, Charles Wilson, said, in terms of the proposed policy, they would help provide anti-doping training to sports coaches at school and district level.

He said Mweli would have the final say over which sporting codes would be targeted for testing, adding: “My thinking is it would be rugby and athletics. “We are hoping that the education and training of sports coaches will start this year, so we can start implementing testing next year.”

He said schools would have to register directly with the institute to confirm their acceptance of the drug protocol, before being targeted for education and training programmes and testing. Wilson said his department would contact those schools that did not register and encourage them to do so.

Khalid Galant, chief executive of the South African Institute for Drug-Free Sport, said South Africa is regarded internationally as a pioneer as a result of its moves to introduce drug testing at state schools. “During our annual global conferences, I met representatives from the United Kingdom, Ireland and New Zealand, and they were all looking at how we were going about it and how they can implement a similar programme.”

He said the protocol applied specifically to school sports, and that the institute’s anti-doping rules would apply when athletes participated in a competitive sport under the auspices of the various national sporting federations.

More than a month since schools opened, some learners are still without schools