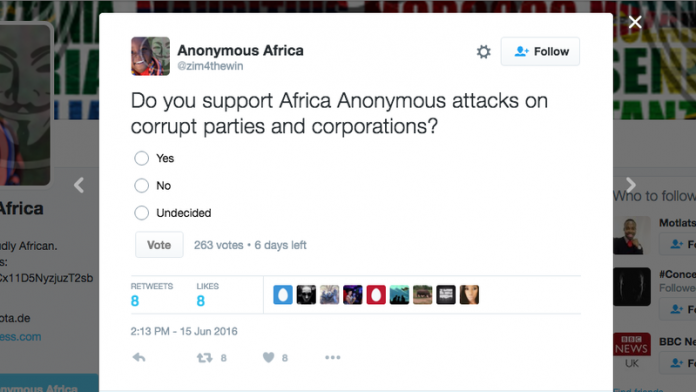 A Twitter profile claiming to be that of Anonymous Africa live-tweeted the apparent shutdown on Wednesday afternoon.

The Gupas hve landed Waterkloof Denial of Service Base. No Visas required. https://t.co/5BrDeVMsAu & https://t.co/2f9ag6aCiD are #Tangodown

Team at Datapro are good. Sahara is still tango down, working on figuring how to get around the bright minds at Datapro for ANN7

Kudos to the folk at datapro, they are mitigating a huge attack! The IT team at https://t.co/GE8yXL7V66 are having less luck #Gupta

ANN7 & TheNewAge are currently down again, the team at Datapro are pro, so this may not last long #Gupta #JusticeForWaterkloof

While Anonymous Africa refers to a company called ‘Datapro’ – presumably the company hosting the attacked Gupta-linked websites – the Mail & Guardian was unable to find a hosting company by that name. Instead, when attempting to access datapro.co.za, the M&G was directed to company Vox Telecom. It is unclear whether Vox Telecom has any links to the websites apparently attacked by Anonymous.

Earlier on Wednesday, Anonymous Africa tweeted about the planned attack on the Gupta-linked websites:

At 12 the ANN7 website will be too busy landing at Waterkloof Denial of Service Airfield to see visitors. #TickTock

We are going to send a message to the Guptas that almost every single South African has wanted to do since they corrupted the government.

The group referred to a ‘Distributed Denial of Service’ (DDoS) style hacking attack, which involves flooding a web server with traffic from bot computers in order to overwhelm the server.  When the web server can’t cope with such a large amount of traffic all at once, it often results in a disruption of a website’s services, and the site goes down.

Other ‘attacks’
Anonymous Africa has linked itself to attacks on other major South African websites this week.

On Sunday, public broadcaster the SABC confirmed to Fin24 that it was the subject of a hack attack that resulted in several of its websites going down for hours on that day.

Then on Tuesday, Anonymous Africa threatened to down the website belonging to political party the Economic Freedom Fighters (EFF) and Zimbabwe’s Zanu-PF.

The hacktivist group said it was attacking the EFF website because of what it said was the political party’s alleged “racisim”.

The EFF website subsequently experienced several hours downtime on Tuesday amid the threats, according to reports. – Additional reporting by Fin24