Paralympian Pistorius’s murder sentence to be revealed in July 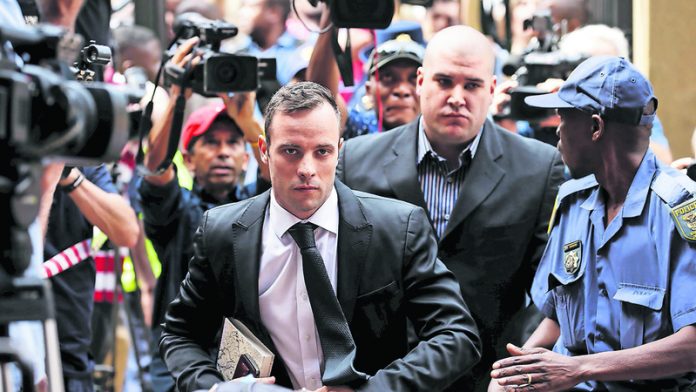 After hearing arguments in aggravation and in mitigation of sentence, Masipa told the packed courtroom that she would sentence Pistorius on July 6 for the murder of his girlfriend Reeva Steenkamp in 2013.

State prosecutor Gerrie Nel told the court earlier on Wednesday that a lengthy jail term was appropriate for the iconic and beleaguered athlete.

“In our conclusion, we argue that the minimum sentence of 15 years ought to be imposed. If however this court finds substantial and compelling circumstances that the court would feel justify a lesser sentence, we argue that a long term of imprisonment should be imposed,” said Nel.

“I’ve argued that 15 years imprisonment ought to be imposed, as a minimum. I don’t think the life of Reeva Steenkamp was minimum. The matter is so serious that I have taken everything that has been argued into account, but that still remains at 15 years.”

Nel told the court that Pistorius lacked any real remorse for killing Steenkamp.

“Real remorse would have been the accused taking the court into its confidence, telling the court why he fired those shots… so the court can accept that. We don’t have that,” Nel said.

He was referring to the fact that Pistorius refused to testify during sentencing proceedings.

Nel said the fact that the court was still “in the dark on why he fired the fatal shots” through the bathroom door of his Pretoria home in 2013, was a “significant aggravating factor”, adding that Pistorius’s decision not to explain himself “nullifies the accused’s remorse and contrition”.

He said the interview was due to air next week.

In a bid to demonstrate Pistorius’s vulnerability to the court, the athlete’s counsel Barry Roux SC asked the double amputee to remove his prosthetic legs and walk towards him in the courtroom. Pistorius wept as he walked unsteadily and a woman helped him to balance himself. Later he leant against a desk, tears streaming from his face.

“It’s 3 o’clock in the morning. It’s dark. He’s on his stumps. That’s all common cause. He suffers from anxiety disorder. We know that the untested evidence [was] when he was on his stumps his balance was seriously compromised. On his own he would not have been able to defend himself,” Roux told the court, referring to Pistorius’s imputed state of mind when he fired his handgun and killed Steenkamp.

Roux argued that the events that unfolded in Pistorius’s Pretoria home in the early hours of Valentine’s Day in 2013 should be seen in the context of his disability.

“The time has come we must look… at least with unbiased eyes.”

Earlier Roux repeatedly referred to his client as a “broken person”, and argued that he had paid for his crime in pain and suffering.

But Nel poured scorn on this submission, telling the court that the true broken man was Steenkamp’s father Barry, who testified in aggravation of sentence on Tuesday. In his wrenching testimony, Steenkamp, a diabetic, told the court that at times he tried to injure himself when injecting insulin in an attempt to feel his daughter’s pain.

In 2014, Masipa found Pistorius guilty of culpable homicide and sentenced him to five years in jail. He was released under correctional supervision in October last year after serving a year of his sentence.

However, the Supreme Court of Appeal overturned the trial court’s decision in December last year, converting his conviction to murder, and ordered the trial court to impose a new sentence. – African News Agency (Edited by Michelle Solomon)