Buhari under siege on all fronts, only a year into his presidency 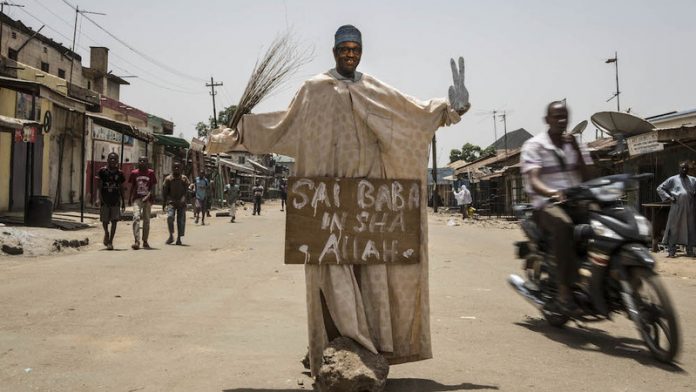 NEWS ANALYSIS
A year into his presidency, Muhammadu Buhari may wonder whether it was worth the fight. The airport in Lagos is named for a president who, like so many in Nigeria, went out with a bang: General Murtala Muhammed led a coup in 1975 and died the next year when a gunman fired on his car. Today he is something of a folk hero, among the more benign in a long list of tyrants. This airport is one of the most important air hubs on the continent. But Iberia has stopped its service from Madrid, and United Airlines will end flights from the United States at the end of June. British Airways, which has been flying to Lagos for 80 years, has also announced a review of the route.

United cites “a downturn in the energy sector” for a slump in traffic. That is a polite way of describing the effect of an oil price drop of nearly $100 a barrel, which makes up 80% of Nigeria’s exports.

In May, Angola outpaced Nigeria as the largest oil producer in Africa. Nigerian rebel groups harry the sector, blowing up wells, pipelines and even rigs at sea. In a report published this month, London-based research consultancy Capital Economics estimates that the continuing attacks have slashed production by a third.

The related foreign currency crunch also causes problems the departing airlines do not cite. Nigeria owes airlines, including SAA, about $575-million in fare revenue. The black-market rate for dollars is nearly double the official rate of exchange. Inflation is at a six-year high — close to 14%.

And the political trouble may only be starting.

For decades, Nigeria did not talk about the short-lived Republic of Biafra — and the deaths of an estimated two million people as the separatist ambitions of the Igbo, who declared Biafra, were beaten into submission in the last three years of the 1960s.

The 50th anniversary next year has seen new calls for independence. Across Igbo territory, the Biafran flag has appeared in homes and at rallies.

In September, Nnamdi Kenny Kanu, the founder of Indigenous People of Biafra, called for weapons to free his people. He was arrested in October, on his return from the United Kingdom. When a court granted him bail, the state ignored the order and kept him in jail.

The case is now being heard in Abuja with charges that boil down to treason and carry a life sentence.

Kanu’s arrest sparked riots and, on May 30 this year, at least 10 people were killed by police when protests turned violent in the former Biafran capital of Enugu. Amnesty International puts the dead at 17 and has called for an inquiry.

At least some of the attacks on oil wells are linked to separatists causes. The country’s Anglican archbishop, Nicholas Okoh, has warned that the conflict is “capable of dragging the country into another civil war”, and an increasing number of outside observers concur. Buhari has yet to visit the region.

The president is also facing the wrath of a free, and boisterous, press. According to the headlines, backed up with little to nothing in the way of proof, Transport Minister Rotimi Amaechi, previously the governor of Rivers State in the heart of the oil fields, “bankrupted” the state in funding Buhari’s presidential campaign.

In Lagos, the Today newspaper said, “one is left with a rather amusing portrait of Buhari and the paradox he embodies — an incorruptible messiah of his people gallantly riding to Jerusalem on a donkey paid for by powerful but extremely corrupt friends”.

Buhari did nothing to bolster his image when his government withdrew fuel subsidies in May. There were riots as the pump price jumped by two-thirds. Some welcomed the move because, before the price increase, there were often shortages.

But, with an economy dependent on generators (the grid power is unreliable), the effect of the petrol price hike is still being absorbed.

And then there is Boko Haram. The terror group wants to impose sharia law, something Buhari supported only a few years ago. Now he speaks against it.

Under previous administrations, such contradictions went largely unremarked, if not unnoticed. Today, Nigeria has one of the largest Twitter communities in Africa, and Nigerians are on Facebook, WhatsApp and dozens of online journals — and Buhari is a constantly top-ranked topic of conversation. Among the things that fascinate the nation is Buhari’s 22 foreign trips in the past 12 months.

Britain has bet on Buhari ending corruption in a country that receives the single largest grant of British aid. Washington hopes he will defeat Boko Haram.

And Buhari remains popular in his own country. But so was Murtala Muhammed.