Oscar’s BFF from Iceland: Gerrie Nel is the devil 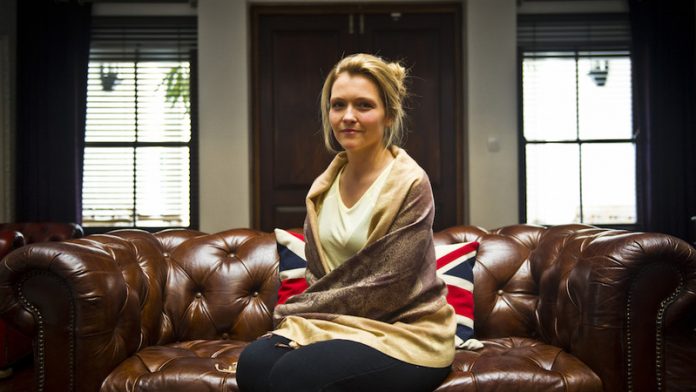 Ebba Gudmunsdottir vividly recalls the morning of February 14 2013 when she discovered that her close friend Oscar Pistorius had killed his girlfriend.

“I went up to my computer that morning. I had just started working. And a friend of mine had sent me an email with a link and he was like ‘Good grief, that’s not good’, or something like that,” she says. “I think I had a nervous breakdown. I really think I did.”

The 40-year-old Icelandic TV chef was in Pretoria this week to perform one of the ultimate acts of friendship: taking the stand as a character witness in defence of Pistorius at the hearings to determine the sentence he will serve for murder.

Asked whether she has ever, even for a millisecond, doubted Pistorius’s version of events on the night when Reeva Steenkamp died, Gudmunsdottir is emphatic.

“No. Never. I have always believed it, and I always will.” She has “utmost respect” for Judge Thokozile Masipa, but is not a fan of state prosecutor Gerrie Nel.

“I sometimes feel like he’s the devil himself. I really do.” She does an unflattering impersonation of Nel adjusting the sleeves of his robe.

“I wouldn’t mind [Pistorius’s psychologist Jonathan] Scholtz doing some of his tests on him. That would be really interesting. You know, I always had the feeling that all of the things he accused Oscar of being are the things he is himself. He’s a narcissist. Oh, good grief, no, I don’t like that man.”

But Gudmunsdottir says that part of Pistorius may have welcomed Nel’s treatment.

Gudmunsdottir believes she has a unique insight into Pistorius’s frame of mind because her 10-year-old son Haflidi was born with the same condition as the athlete.

“I’m raising a double amputee and I see so well the vulnerabilities and how they are also aware of not getting themselves into situations where they might be compromised. Like with the prostheses, Haflidi is worried that someone might take them.”

It’s a fear that Pistorius shares, she says. “They don’t want to get into fights because they are not good at fights. And I know Oscar was like that. He tries to avoid all confrontation, and my son is like that as well.”

At times, Gudmunsdottir speaks about Pistorius in the past tense, as if he were dead, or at least altered beyond recognition. There is no doubt that Oscar Pistorius today is a significantly different person to the one Gudmunsdottir’s family met in the spring of 2006.

She and Pistorius began communicating through a reporter who interviewed the athlete.

When Pistorius came to Iceland to work with Össur, the company that makes his prosthetics, and also worn by Gudmunsdottir’s son, he contacted her family and they met.

She cooked Pistorius chicken in a creamy sauce with pesto.

He first came to Gudmunsdottir’s attention when she was pregnant with Haflidi. Googling “double amputee” to try to make sense of what life would be like for her unborn child, she came across a picture of Pistorius competing in the Paralympics.

“I remember seeing that photo of him and — it sounds so horrible now — I was like ‘He’s not black! And he lives in South Africa!’ ” Gudmunsdottir laughs. “It makes you sound so stupid.” After their first meeting, Pistorius developed a close friendship with Gudmunsdottir, her husband and their two children.

“His sponsors always made him travel a lot. I felt a bit sorry for him because he always seemed quite exhausted. I remember at Manchester in 2010, he was happy, he loved what he was doing, but he seemed so tired. Also he was so much alone.”

Gudmunsdottir never met Steenkamp and refers to the shooting as “the accident”. When Pistorius went on trial for murder in 2013, Gudmunsdottir and her mother flew to Pretoria to attend the first two weeks of proceedings.

“He was always there for us,” she shrugs. “So it just seemed so strange not to go there when he really needed us.”

When Pistorius was sent to the Kgosi Mampuru prison in Pretoria, where he would spend 10 months, Gudmunsdottir wrote to him weekly. Pistorius’s sister, Aimee, would print out her emails and take them to the athlete, she says.

Gudmunsdottir also had a handful of short phone conversations with him.

“It’s difficult to know what to say in a phone call like that. You could feel the pain through the voice. And the loneliness.

“But I think just hearing a voice on the other end was good for him. So I was trying to be as kind as possible and let him lead the conversation. But usually what he’s saying is, ‘Thank you, thank you, thank you for still being a friend and not [having] left.’ ”

She says the Pistorius she now encounters is so depressed that he is indifferent to the loss of his athletics career.

This week, Scholtz said he believes the athlete’s mental and emotional state is so perilous that he should be institutionalised.

Asked whether she agrees, Gudmunsdottir answers without hesitation. “Yes. He is in no shape for house arrest even, let alone prison.”

Has she been concerned that Pistorius might commit suicide? “I thought about it, yes. But I knew that his faith is so strong, so I always believed that that would keep him here. He’s not the type who runs away from things.”

The world may have turned against Pistorius but Gudmunsdottir’s loyalty is unwavering. The athlete remains a figure to whom she feels she owes a great debt, particularly at the time of the birth of her son.

“There had never been a child born like this [in Iceland] and everyone was like, ‘Well, you know, it’s probably gonna be fine’, but you didn’t really know anything.

“I have raised my son much better because of him [Pistorius], because I wasn’t always so scared and I didn’t always feel so sorry for him. I was proud of him. Oscar gave us that.”