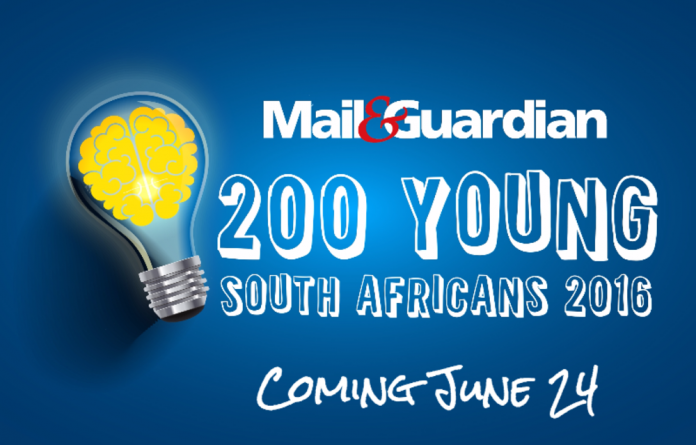 Now into its second decade, the 11th edition of the Mail & Guardian’s Young South Africans continues to show the wellspring of talent that this country has to offer.

In every issue, we’ve tried to find exceptional and interesting young people from every corner of South Africa, and 2016 is no exception. The country offers examples of excellence and trailblazing creativity not only in the arts and in the media, but also in business, science, technology and research. You’ll see individuals in almost every arena who are striving to improve the lives of others, and especially those of the next generation. Activists are pushing for change in areas from the environment to education and healthcare, and some of our best and brightest have devoted themselves and their talents to doing good work for an array of organisations and as part of the government and political scene.

Others are the young people at the top of their fields, people who have done incredible things and performed remarkable physical feats in areas we may not even have considered before.

This flagship is not just about what the Mail & Guardian thinks, but is about who the public views as the best and brightest young people. At the beginning of the year, we firstly open nominations to the public. We received over 1 200 nominations in 2016. Choosing the finalists is a rigorous process, and each of the people on the list is an exceptionally strong representative of their fields of interest or expertise. We also draw on the knowledge of experts, from within the Mail & Guardian and without, to help us to find those that truly stand out in their field.

Because the Mail & Guardian is always looking for what’s new and cutting-edge, we make a point of avoiding repeats — the way that we can always find individuals who have never appeared before is complimentary of the youth in this country in general.

Ten of the eleven categories feature those from 18-35, but many of our best and brightest are still at school. For the second year, the Rising Stars category profiles them. These are the promising young people who have already done something great, and they are names to watch out for in the future.

After the unveiling on June 23, you’ll be able to find this year’s profiles online at 200ysa.mg.co.za (along with the archive of every Young South African featured since 2006) and you can take a look at #MG200Young to follow the conversation on Twitter.

Sipho Hlongwane
Sipho Hlongwane is The Daily Vox’s acting managing editor. A published author, columnist and reporter by training School of Hard Knocks, he has covered some of South Africa’s most vivid protest marches, wildcat strikes and press conferences. His scariest assignments were for fancy women’s magazines. He obsesses over football and popular music for fun.
Facebook
Twitter
WhatsApp
Linkedin
Email
Telegram