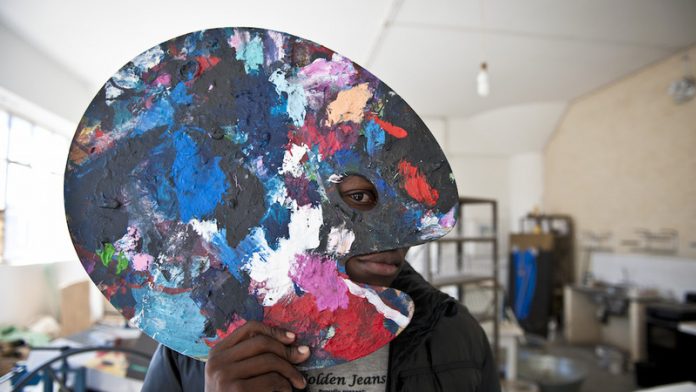 There is a verve to Nelson Makamo even as he plots a future without the support of a gallery.

Makamo recently split with the Everard Read Gallery over general statements he had made in the media about the nature of the relationship between artists and galleries.

Although the falling-out with his former gallery was conclusive, Makamo has seemingly put it behind him to focus on the challenges that await.

Instead of prepping for a solo show, he is preparing for a three-month residency between August and mid-October in Saint-Émilion in the south of France, courtesy of the Southern African Foundation for Contemporary Art. He is anticipating the interpretive nature of the assignment, and leaving room for how his European habitat might influence his direction.

Of the spat with his gallery, Makamo says: “Obviously, it was a shocking experience and, more than anything else, I don’t want to find myself in a situation where I am working with someone and they feel compromised.”

In his studio, dwarfed by his larger-than-life portraits of black children as well as huge charcoal drawings exploring the dichotomies between city and rural life, Makamo’s work begins to take on a new resonance.

In the catalogue accompanying Makamo’s 2011 exhibition CityTales and Countryscapes, Nontobeko Ntombela suggests the artist’s work to be the product of his “numerous journeys between Modimolle and Johannesburg”.

Indeed, on his return from a family meeting, Makamo is full of tales of the idiosyncrasies of rural life. “A lot of the inspiration for my work comes from family,” he says. “When there are family gatherings, I always make a point to sketch or photograph.”

Despite being from a printmaking background, Makamo, an Artist Proof Studio alumnus, established himself with his mixed-media drawings. “Most of my work is expression. I find it easier,” he says. “The mixture of that charcoal dust with an eraser, it’s something you can easily control in terms of toning, unlike the brushstroke. There’s an instant magic that always comes out. You are able to express yourself in so many ways, by just using your hands.”

The addition of flecks of colour aims at “provoking or exciting”. In one charcoal drawing, he clones a barefoot rural woman so that she becomes twinned, walking side by side with her counterpart. Here, Makamo switches the bucket that was present in the referenced drawing, turning it into a boombox, with the additional woman wearing headphones and an astronaut’s helmet.

The women appear to be in conversation, not with words but in their body movement, the binaries of their presupposed histories suddenly melting away while remaining visible.

More than his commercial success, Makamo is excited about his life outside the art world, where he is involved in a number of philanthropic ventures.

“I just felt that it’s about time that we as artists do something outside of the studio,” he says. “I have always used kids as the subject matter of my work, so I felt that it would be appropriate to [work with them], as someone fortunate enough to make a living out of something I am passionate about.”

Makamo says that he and some art collectors with whom he has built relationships over the years have set up a philanthropic scheme that involves the creation of murals, and the building of libraries and playing facilities.  “One of the interesting things about the art world is that you meet all sorts of people,” he says.

Makamo says he has got to the position he is in terms of his commercial success by looking to improve his own work rather than using other artists as a reference. “I would say it was studying my own work and also listening to the comments of people, be it on Facebook or wherever, but people who were not in the art world.”

Makamo also has a mentor, an art advocate with a career outside the art world, whom he regards as a fatherly figure. “He always says to me that, when you approach your concept, always approach it with respect,” he says.

Though some have viewed Makamo’s work as innocuous, for others it is imbued with a deep sense of questioning about the continued horrors of migrant labour and the mythologised ideas about what success in the city looks like.

As a rural boy made good, and one who constantly evaluates what that means beyond monetary terms, it is a subject he is well placed to explore.