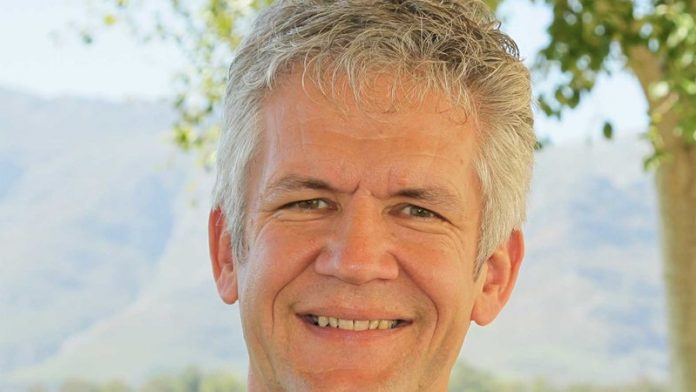 Professor Bert Klumperman is like an architect with polymer chemistry: he creates new structures that solve problems. It’s been his life’s work and an extremely creative journey.

Considered a world leader in polymer chemistry, he is a Distinguished Professor of Polymer Science in the Department of Chemistry and Polymer Science, Stellenbosch University.

To understand his work, first meet the monomer. This is a molecule that bonds with other identical molecules to produce a polymer. Monomers create polymer chains because they can bond at each side. Polymers owe their properties, to a large extent, from their chain-like architecture.

This is where the fun begins. With polymers, you can create various materials with specific functionalities and properties such as stretchiness, strength, transparency or being recyclable.

“The nature of the repeating units can vary immensely. Most people will know polymers from plastic bags or plastic toys, but it is so much more than that,” says Klumperman.

After graduating in the Netherlands with an MSc in Chemical Engineering, Klumperman worked as a research scientist, focusing on the process of polymerisation, with emphasis on the mechanistic and kinetic studies of radical polymerisation processes (kinetic refers to the rate of the reaction and how this is influenced by conditions.)

Klumperman says: “With a plant that produces polymers, you need to know: how fast does the process occur? What happens if you change the parameters? What happens if unforeseen situations arise?” Polymer production generates a lot of heat so some situations could create potential safety problems. From an industry perspective, understanding the polymerisation process means knowing how to work safely and economically.

Polymerisation processes usually have “initiation” (the start process), then “propagation” (when monomers are repeatedly added to the active chain) and then “termination” (when the chain growth ends).

“With the RDRP process, you initiate all chains relatively early but keep the majority in a dormant state,” says Klumperman. The idea is as one chain starts and stops it causes the next chain to start and stop. This should result in equal length chains.

Klumperman was able to produce detailed information about RDRP, which received global attention. He was the team leader of the group that described, for the first time, how a growing copolymer chain influences its own environment. Another significant contribution was solving the initial waiting period that occurred with one of the techniques applied to RDRP.

“Once you understand how the polymerisations work on various levels, you can build up molecules in a precise way,” says Klumperman. “You can design a fantastic polymer, but if you don’t understand the processes —how to build it —it remains an illusion.

“There is a very creative and exciting aspect to my work. You encounter a problem, such as a new way to deliver drugs into the body, and then you design a molecule that helps solve the problem,” says Klumperman.

Take, as an example, his current research focus around drug delivery systems. The polymer is divided into two blocks — block A and block B. Block A is designed to be water soluble, while Block B binds to existing drugs in a reversible manner. The structure then has the drugs in the core and the water-soluble part as the shell.

It’s put as an aqueous solution in the bloodstream. Klumperman and his team have designed the structure so that it can find its target in the body; for example, the surface of tumour cells.

“Once reaching the tumour cell, it is taken up by this cell. The tumour cell’s acidic pH causes the links between the drugs and the rest of the structure to break. The drug is then released,” explains Klumperman.

Within Klumperman’s drug delivery research, there is a cluster of projects around the delivery of certain peptides. One of the projects uses a peptide with anti-malarial properties.

Another cluster of projects takes existing drugs (mainly anti-tumour drugs) and connects these to a polymer. Certain diseases have developed drug resistance, such as drug-resistant tumours. This is caused by different mechanisms like a disease cell evolving so that its membrane pumps out the drug. Klumperman explains that he then looks at a drug delivery system that inhibits this pumping process. There are patents for the novel polymer designs of these drug delivery systems, specifically an anti-malarial drug and anti-cancer drug.

During his time in industry, Klumperman was the team leader for developing poly(styrene-co-maleic anhydride). This versatile polymer is still being used globally, and Klumperman is considered a leading expert on it.

In Klumperman’s research, the polymer has been used to make antimicrobial materials, materials applied to post-harvest storage of grapes for killing a specific fungus, solvent-free liquid coating, and in the field of male contraception.

Prof Bert Klumperman is an A2-rated scientist. He is a Fellow of the Royal Society of South Africa and has received numerous awards and accolades. These include the Gold Medal of the South African Chemical Institute (2013) and the Sasol Chemistry Innovator of the Year Award (2015).

He has published around 170 papers and is currently supervising over 20 postgraduate and postdoctoral students at Stellenbosch University. He has graduated close to 70 students.