Hlaudi Motsoeneng may be the ‘devil’, ­but we can’t ignore the media’s other serpents 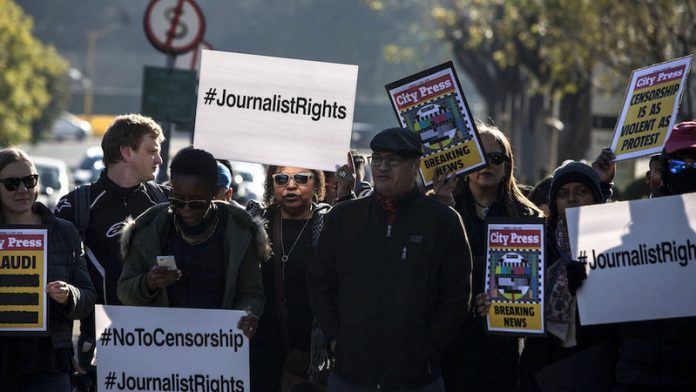 From the co-option of the SABC choir (costing about R3.7-million a year) to the latest musical debacles in the form of Hlaudi Motsoeneng’s 90% praise song, Thank you SABC, and anti-racism songs, at least the tragedy of the national broadcaster has its comic side.

When  “violent” protests are blacked out by SABC chief operating officer Motsoeneng and journalists exposing the indefensible become muzzled renegades, it should have been easy to  hop over to Auckland Park with a placard to protest against the political capture of a public entity. After all, the writing is clearly on the wall regarding the depth of our slippage down the abyss of the Zuma years.

Yet I could not strap a placard over my shoulders and “sing and dance” away the decline of people’s poet Mzwakhe Mbuli’s sense of aesthetics and other concurrent ills.

First, it is because I suspect that Mbuli’s tastes in poetry, backing tracks and video directors have always been this bad and he was just waiting for an opportune moment to show us once his supper was ready.

Second, the goings-on at Hlaudi’s, I mean Jay-hova’s, kingdom on the hill are hardly the scariest of the generally Orwellian nature of things in this media landscape.

How could I hop over to Henley Road, when I as a citizen – nevermind as a journalist – have suffered innumerable indignities at the hands of the so-called “independent” media? A part of me would have felt hypocritical.

These are the same “independent”, free-thinking media that, by omission or otherwise, perpetuate myopic binaries on ethics, race and corruption. As journalists, we often show our hand by what we say or omit.

Granted, public money is at stake here, but as journalists, every time we trudge off to the SABC, we should think about how many times we have stood in solidarity with journalists weathering storms at other newsrooms, or the silences we perpetuate in our own.

But I also speak of another inertia – that of being a black journalist in today’s South Africa. Simply put, it means, figuratively, to die a little every day. For instance, how much attention do we pay to white-collar corruption, and what does our inability or unwillingness to address it with each other as an industry really say? To me, it says we have settled on a fixed idea of what the actual face of that corruption in post-apartheid South Africa looks like.

And what of the sanctity of the self? So, although it may be morally noble to uphold the sacredness of Reeva Steenkamp’s corpse, as it contributes nothing to our understanding of the Oscar Pistorius trial, what do we say of the routine humiliations meted out to black people in the pages of the Daily 4-5? The Daily Sun, as it is officially known, is to recall Nina Simone, the strangest of fruit with blood on its leaves. Filled with sometimes half-clothed human beings in all manner of disbelief and grief, the black bodies on its pages swing as if battered by the southern breeze.

To be a journalist in South Africa is often to don a selective lens – that of dishing out puerile interpretations of violence as an act carried out on property and moralistically demonising the perpetrators of such “violence”. The actions of our subjects matter only in so far as they threaten the civility and infallibility of neo-colonial might.

For example, the covering of #FeesMustFall as novel, and the emergence of a deliberately ahistorical lexicon to describe its routines is the effective erasure of all post-apartheid student protests that came before it. On radio, students didn’t toyi-toyi, they merely sang and danced in the eyes of some hacks. And every time a journalist made the news in other protests, be they gashed on the head by a stray brick or told to step back by a section of the area they had parachuted into, they silenced the actual makers of the news.

But it is often not the streets littered with burnt rubber fibres that journalists need to fear most. The newsrooms, fraught with unseen booby traps and extreme violences of the ideological kind, are often stifling, with untransformed dinosaurs at the helm of pivotal aspects of the news production cycle.

In 2014, a year after receiving a dismal report on transformation in the media conducted by the print and digital media transformation task team, the Print and Digital Media South Africa, a collective of print newspaper owners, evaded implementing the task team’s recommendations collectively, opting to let each media house “handle its own issues”.

This polarising narrative, sometimes reflexively peddled in media reports, is often reflected in the unrepresentative demographics of principled protests such as Friday’s protests outside SABC. Remember that the prevailing culture in the South African media is to be suspicious of an exclusive gathering of black journalists.

As much as I am loathe to say this, in the case of the SABC protests, it is perhaps the silences of the absent that are the loudest voices.