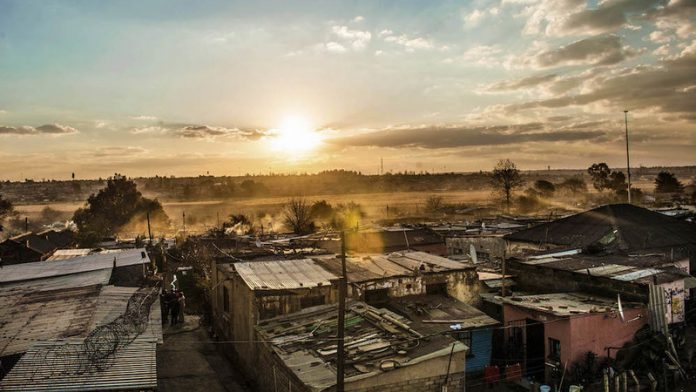 “This is where it all started,” says a Johannesburg municipal employee. He is standing next to the Freedom Charter monument in Kliptown, Soweto. The charter was signed there on June 26 1955 and is seen as the foundation of South Africa’s Constitution, which was adopted in 1996.

The R160-million monument in Walter Sisulu Square was officially opened by Thabo Mbeki, when he was president, in 2005 on the 50th anniversary of the signing of the charter.

Just across the railway tracks from the square, Kliptown residents live in squalor. Children fill the narrow streets, playing football, dodging the piles of trash and sewage. Illegal electricity connections are everywhere, some at head height, others on the ground.

“There is a funeral every weekend in Kliptown,” says Mathapa Makukule, who works at the Soweto Kliptown Youth Foundation. “It’s either Aids-related or someone has been electrocuted.”

He says children get sick because faeces are dumped in the street and refuse is not removed.

“The government should come here and live here for a week and experience what the people of Kliptown experience every day,” he says.

Ivy Manyama (55), a resident of one of Kliptown’s informal settlements and an activist, says the biggest need in Kliptown is housing. “People here are living like pigs.”

Manyama says that when the ANC comes to Kliptown, they always visit the square. They never cross the railway tracks and enter the informal settlements.

Since 2012, Manyama has taken on the Johannesburg municipality, fighting for RDP houses for people living in her area. “It’s my duty. The people are suffering. We have to have change.”

Makulele says he has seen corruption in the list process for RDP homes. “People who moved to Kliptown five months ago are suddenly number 12 on the list,” he says. “People who have been here since the Seventies are not even on the list.”

The municipality of Johannesburg is the largest in South Africa. It’s home to 4.4-million people in more than 1.4-million households, covering an area of 1 645km&2sup;, according to the 2011 census. This is an average of 2696 people per square kilometre and 2.8 people per household.

Slightly less than 73% of the population is of working age, but 25% are unemployed, and youth unemployment is slightly less than 32%. Of the young people over the age of 20, 35% have matric and 19% go on to tertiary education.

About 35% of Johannesburg’s residents have no piped water to their homes, 23% have no flushing toilet, 9% have no electricity and 4% have no weekly refuse collection.

Sophiatown, a suburb in the west of Johannesburg, was the epicentre of black politics, jazz, art and literature in the 1940s and 1950s, until black residents were forcibly removed in 1955. Today it houses working- and middle-class people.

Quinton Carls (68), who lives there, says he is not voting in the August 3 local government elections. He says the ANC is only seen in the suburb when they are campaigning for votes.

He is critical of President Jacob Zuma’s role in the firing of finance minister Nhlanhla Nene, which caused the rand to plummet. “Who suffers because of that decision?” he asks. “It’s the poor.”

Yet he believes there is no other party that speaks for him.

A hairdresser, who asked to remain anonymous, says she is voting for the Democratic Alliance. The biggest issues for her are crime, gangsterism and drugs, both in her home suburb of Newlands and in Sophiatown, where she works, and she worries about her three daughters.

Thieves steal copper cables in Newlands, which interrupts electricity supply. When that happens, City Power takes so long to fix the problem that some residents have taken to fixing the problem themselves, and don’t even log a complaint.

In the neighbouring suburb of Westdene, artist Lebohang Goge (32) is pushing his six-month-old son in a pram. He has joined the WhatsApp group for Westdene, which residents use to share information to fight crime.

Goge says if people are actively engaged in their community and know the people in the area, they are less likely to be targeted. “Westdene has a sense of togetherness. We know everybody and we all greet each other on the street,” he says.

Westdene has recently had bicycle lanes built along the main street, Thornton Street. But cyclists are seldom seen using the lanes and these have become pedestrian walkways. Goge says this is a perfect example of how local government doesn’t engage properly with residents. “Are they now going to buy people bicycles to use the bike lanes?” he asks.

There are 260 council seats – 130 for ward councillors and 130 for proportional representative councillors. This left the ANC with a 153-seat majority, the DA with 90 seats and the IFP, the Congress of the People and the National Freedom Party with four, three and two seats respectively.

Last week’s Ipsos election poll had the DA ahead with 35% of the vote, marginally above its performance five years ago. But its statistics show the ANC has lost almost 50% of its electoral support, falling to 31%. It would seem that some of that support has shifted to the Economic Freedom Fighters, with 9% of the vote. The EFF didn’t contest the 2011 elections. In the Ipsos sample, 16% were still undecided.

In Brixton, Themba Buda (20) is in his second year at the Academy of Sound Engineering at the SABC. He lives in nearby Hursthill with his brother. He was mugged in the street at gunpoint in September. A friend, who was with him, had his phone, money, sweater and shoes stolen. “I mean, they stole the shoes off of his feet.”

A few months before that his brother was attacked by knife-wielding criminals. “We need more protection.” Buda says students experience crime first-hand and, for this reason, he believes they deserve to have a voice about the problems they face.

Nondumiso Dubaza (22) is a fourthyear computer sciences student at the University of Johannesburg who lives in Brixton. For her, the most pressing problem is crime. “Safety off campus is pretty much nonexistent,” she says. “You can get robbed in the day, right outside your gate at 11am.”

She says criminals pick out students because they are likely to have laptops or tablets. “You feel like a target.” She says safety on campus is also a problem with many cases of rape taking place. “How am I meant to feel safe as a woman on campus?” she asks.

Thulane Mdlalose (18) is in his first year at the Campus of Performing Arts on the eastern side of Johannesburg, in the suburb of Kensington. He lives in Dlamini in Soweto. His biggest concern in Kensington is crime. Students don’t feel safe going to the nearby Rhodes Park. A friend from campus was recently mugged near there and another had his guitar stolen while walking home to Bezuidenhout Valley.

In the neighbouring suburb of Troyeville, Albert Kheoane (59) says he tries to make a living doing odd plumbing jobs. He lives in Hillbrow where, he says, drugs, prostitution and human trafficking is out of control and he needs to find somewhere else to live. “Crime is too much. If any political party says they can stop crime, they are lying.”

Kheoane says the police in Hillbrow are either turning a blind eye to crime or are involved in criminal activity. “Our policemen are criminals. I have seen with my own eyes police selling drugs.” He believes that the only way to fix crime in Hillbrow is to replace the entire police force in the suburb.

Do Jo’burg’s plans, budget and bills balance? Some got calming zones, others homes

There’s an election tug-of-war between the incumbent ANC and the Democratic Alliance over the City of Johannesburg.

With just days to go to the local government elections, it’s worth looking at how the metro has spent the biggest slice of its budget. It is more than R40-billion for 2015/2016 and it’s an estimated R50-billion for 2016/2017.

The metro has spent the bulk of its budget on transportation and housing, according to five years of service delivery and budget implementation plans and financial reports. With a population of about five million and counting, it’s no wonder that housing is a key priority, with examples such as the 600 rental housing units built in Fleurhof for R20-million.

The city has also spent millions on upgrading roads in working-class Orange Farm and heard the concerns of upper-middle-class Parkview and Greenside residents with the construction of traffic calming zones.

Although the city has made great strides in delivering services, it continues to spend a large part of its budget on paying salaries.

In the past two financial years, the city budgeted about R16-billion for staff salaries. Councillors’ salaries have also steadily risen and, in 2014/2015, more than R120-million was paid to them.

According to the medium-term budget of 2015/2016, employment-related costs are budgeted to rise to close to R10-billion. The city notes that the increase of 9% in expenditure is mainly a result of the increase in employee-related costs.

Between the escalation of employment costs, provision of cycling lanes, revamping hostels and upgrading sewerage systems, among other things, in numbers, the city tells a “good story”. – Athandiwe Saba

The ideological aims of the criminal justice system in dysfunctional societies, like South Africa, is to indirectly legitimise the inequitable economic system
Read more
Friday

Criminals prey on desperate people by offering them false promises of a better life. In fact, they are coercing them into lives of exploitation and misery
Read more
Advertising