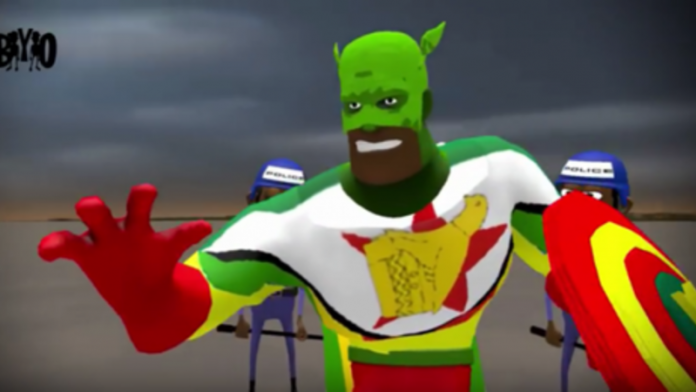 While Zimbabweans have taken to the streets, Facebook and Twitter to rally behind the #ThisFlag movement and its founder, a different kind of hero is inspiring people on YouTube.

Meet Captain Z. “Z” stands for Zimbabwe and the animated superhero’s fight is against injustice imposed among ordinary citizens.

All three creators have experience in animation, IT and entrepreneurship and were able to put their talents together to create The BYO Show and Captain Z.

The BYO Show studios are located in the trio’s hometown, Bulawayo, in east Zimbabwe.

“The BYO Show was born out of our great passion for storytelling, art and innovative technologies like to bring life to enchanting stories and lovable characters,” Ndlovu tells htxt.africa.

“We strive to communicate interesting information in all our works. We animate and produce content that facilitates learning, or the acquisition of knowledge, values, beliefs, and habits through educational stories,” he adds.

Other animations on the YouTube channel feature episodes that address issue such as xenophobia, cyber-bullying, corruption, human rights and domestic violence.

The origins of Captain Z
If the character’s name and look reminds you of The Avengers’ Captain America, you’re spot on.

“Captain Z is based on Captain America from the movie, ‘Civil War’,” Ndlovu tells htxt.africa. “After watching it, we felt from we wanted to do something quite different from whats on the [African animation] market and we wanted to produce something that people can connect with. Added to that is the fact that there are no African comic-based heroes children and adults can look up to.”

It took the trio us a week to conceptualise and launch the character and the first episode was uploaded on 14th July.

The pilot episode was produced using 3D animation software. All subsequent episodes are being created using software that emulates the 3D Animation technique.

Watching the minute-long pilot, one cannot help but recognise the story of #ThisFlag founder, Pastor Evan Mawarire, being played out.

In it, Captain Z fights off police officers and is seen defending himself in court with a Bible as his weapon to defeat his enemies.

When asked whether or not Captain Z indeed is based on Mawarire, the creators said it was up to viewers to free to interpret it as they see fit.

Citizens warm up to Captain Z
The response from viewers so far has been very positive, Ndlovu says. Messages appreciating the talents behind the concept have come through on The BYO Show’s Facebook page, with others commenting on its significance within the citizen protests.

“We are committed to telling African stories using technology, we believe our work speaks for itself. With Captain Z, we want to create a superhero who stands for something that’s ubiquitous across all corners of Zimbabwe, Africa and ultimately, the entire world,” Ndlovu concludes.

Keep an eye out on The BYO Show YouTube channel to catch the next Captain Z episode.

All original words & media by htxt.africa by htxt.media are licensed under a Creative Commons Attribution-NonCommercial-ShareAlike 4.0 International License. Permissions beyond the scope of this license may be available at htxt.africa. Where images and material are supplied by rights holders outside of htxt.media, original publishing licences are indicated and unaffected.