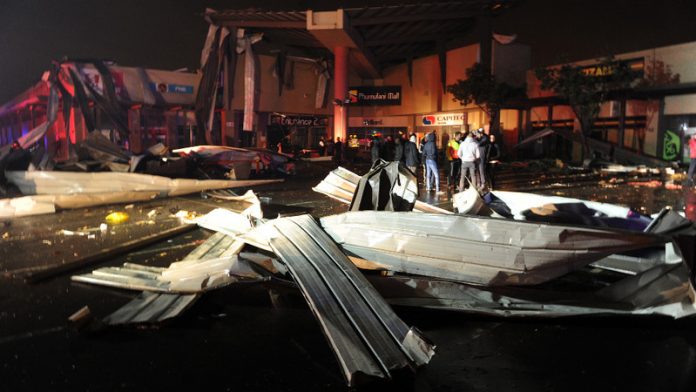 At least 20 people were injured on Tuesday at Tembisa’s Phumlani Mall when a tornado ripped through the East Rand township, collapsing the roof of the mall and causing extensive damage to the local hospital to which the injured were rushed.

Month-end shoppers at the mall stood dazed as search and rescue teams pulled people out of the rubble of damaged shops.

Health department spokesperson Steve Mabona said some 20 people who suffered injuries at the mall had been brought to the hospital, where the tornado destroyed the fence and carports and damaged about 20 vehicles belonging to employees, as well as three ambulances.

It collapsed the part of the roof of the hospital and uprooted trees, he said, but patients were spared injury.

“Fortunately, no patient or employee sustained any injury as a result thereof,” Mabona said.

“The hospital is currently attending to people who were injured at the destroyed Phumlani Mall in Tembisa, about 20 people have been transferred to the hospital.”

Mabona said ambulances from neighbouring areas had been dispatched to assist.

“At around 4pm this afternoon, a tornado hit Tembisa and damaged roofs at Phumlani Mall, Tembisa Hospital and Total garage on RTJ Mamani Road,” Kgasago said.

“According to information at our disposal, two people were reported injured at the mall and our search and rescue teams are currently rummaging through the rubble searching for survivors.”

Kgasago said no casualties had been reported so far.

He added: “We have not got more information about the extent of damage caused at the Total garage but we got a report that the roof was also ripped off there.”

“The whirlwind has gone in the direction of Bronkhorstspruit and we will be trying to establish how many people are injured.”

Paramedics say three people have been injured after the roof of Phumulani Mall in Tembisa collapsed due to a heavy storm.

“Initially, reports were received that several people were trapped under the rubble. However, upon a scene assessment, emergency workers only found three people with minor injuries,” ER24 spokesperson Werner Vermaak said.

It is believed their injuries were caused by falling debris.

“Paramedics and rescue workers found debris scattered across the parking lot of the mall as well as twisted metal strewn at the entrance of the mall. Several vehicles were also damaged.”

Vermaak added that fire and rescue teams conducted a full search of the area to ensure no one else was trapped. At this stage the teams have not found anyone else injured.

@eNCA Our friend filmed the #Tornado that caused damage to the mall in #TembisaTornado pic.twitter.com/slotZGml1F

Ten infants died at Tembisa hospital at the end of last year. The health department tells us this it is more...
Read more
Opinion

With one in five men admitting to assisting in sexual assault, it is vital that those who abet perpetrators be deemed liable
Read more
National

Panyaza Lesufi’s focus is on the poor, and on what the ANC needs to do to win back unhappy voters
Read more
National

Memories of mama keep the past alive

A township obliterates a rural life bulldozed by apartheid

This week the Mail & Guardian is proud to publish a story that is a continuation of a new, specialised reporting genre,
Read more
Advertising
Continue to the category
Politics