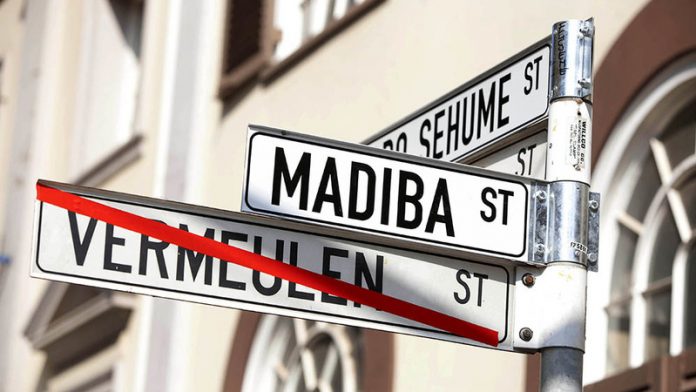 The harmony that the Constitutional Court presents to the outside world was disturbed recently when members of the court differed vigorously over the outcome of an appeal against the grant of an interim interdict to AfriForum. The interdict ordered the City of Tshwane to stop removing the old street names in the Pretoria area and to reinstall the street names already removed.

The city had begun to implement a policy of removing the names of Hendrik Verwoerd, Louis Botha and a battery of others who had ruled during our racist past. This policy prompted litigation from Afriforum.

The interim interdict granted to AfriForum, pending a substantive application to reverse the street-naming policy, was based on AfriForum’s argument, thus described by Chief Justice Mogoeng Mogoeng in his majority judgment: “The old street names are an historical treasure and a heritage so intimate to the very being of the Afrikaner people that their removal would constitute an infringement of their right to enjoy their culture as envisaged by section 31 of the Constitution.”

The city was aggrieved by the order granted by Judge Bill Prinsloo and appealed to a full Bench of the North Gauteng High Court, which dismissed the appeal – hence the hearing before the Constitutional Court.

A key issue was whether an interim order is appealable. Traditionally, interim orders were rarely considered to be the proper subject matter of an appeal, but this approach has been the subject of significant qualification in recent times. Mogoeng, for the majority of the court, found that there were compelling grounds to grant leave to appeal, including the “irreparable harm” that the city suffered by being prevented from implementing a decision taken in the scope of its constitutional powers, as well as the effect of a punitive cost order that the lower courts made against it.

Nine judges found that, on the merits, AfriForum had failed to prove the existence of the requirements for an interim interdict. In particular, Mogoeng held that AfriForum had not made out a case that it would suffer irreparable harm if the interdict was not granted: “AfriForum and its constituency do not have the right to have the old street names they treasure displayed in perpetuity. On the contrary, [Tshwane] council has the constitutional and statutory power to change them. The only right AfriForum, like all other residents, has is to participate meaningfully in a properly facilitated process leading up to the change of street names.”

Although acknowledging that “the wounds of colonialism, racism and apartheid run deep”, judges Edwin Cameron and Johan Froneman dissented – which surprised many, in that they are widely considered to be progressive justices. They offered two justifications for their approach.

In the first place, they concluded that the order against which the appeal was lodged was clearly temporary in effect, and thus the lack of permanent consequence meant that, on legal principle, this was not an order that could be appealed.

Their second justification proved the more controversial. Although making it clear that they disagreed vigorously with AfriForum’s view of history, the two justices held: “On general principle, we think the Constitution creates scope for recognising an interest or right based on a sense of belonging to the place where one lives, rooted in its particular history, and to be involved in decisions affecting that sense of place and belonging. Whether that strictly falls within the cultural, environmental or citizenship rights in the Bill of Rights, or a combination of them, still needs to be explored. At this, still-interim, stage, the existence of the right in this broad form is enough.”

Their judgment asserts the importance of cultural diversity and of the protection of minority rights to culture, a finding that lies at the heart of the controversy because it prompted an animated response from Judge Chris Jafta that, significantly, was the subject of concurrence by the remaining eight judges.

Jafta’s disagreement is captured in the following passage of his judgment: “Therefore an interpretation of our Constitution advanced in the [minority] judgment, to the effect that ‘the Constitution creates scope for recognising an interest or right based on a sense of belonging to the place where one lives’, rooted in oppression, is untenable. It does not conform with the clean break from the history characterised by discrimination, humiliation and indignity suffered by black people and which the Constitution loudly rejects.”

Jafta is manifestly correct that the Constitution envisaged a clean break from the past, so this part of his judgment is hardly a surprise. What has raised legal eyebrows is the vigorous manner in which he described his colleagues’ approach. This in turn raises questions as to the basis of an interpretation of cultural rights that is exceedingly generous, not simply to minority views but to a view of AfriForum as saturated in nostalgia for an awful past.

On a holistic reading of the minority judgment, Cameron and Froneman were concerned with a critical area: the ambit of the protection of cultural rights and the extent to which this constitutional guarantee covers “historically rooted cultural traditions”. It is hard to see how the Constitution can be read to protect the kind of public adherence to tradition as advocated by AfriForum.

Doubtless this will require explication by the Constitutional Court when the final proceedings are before it. It will probably be at this stage that a clearer picture will emerge as to the possible long-term divisions in the court.