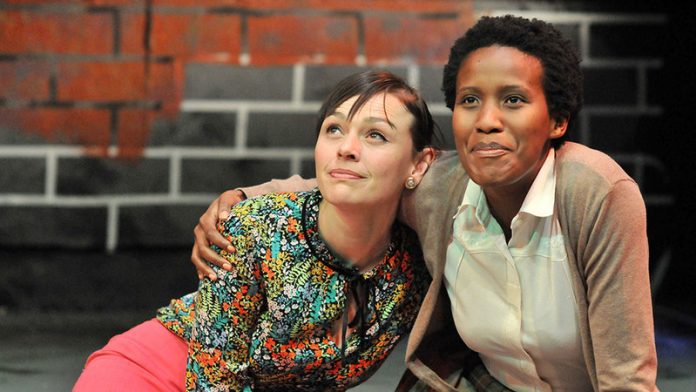 In Zakes Mda and John Kani’s collaboration, The Dying Screams of the Moon, the thorniest of South African issues is used as the pivot upon which to swing the story. Land is a cumbersome topic, for reasons the story unpacks with some degree of complexity.

The land-owning white people feel entitled to it because they “civilised” and “tamed” it, while the black people were removed from something intrinsically tied to their way of life and sense of worth. The makings of a deeply profound yet entertaining play are all at the ready, and yet there is something unrealistic about our two leading women’s verbal tryst.

Our setting is a farm church, the Chapel of the Broken Christ. It is where the unnamed black female protagonist, referred to as Lady, once lived with her family before being forcefully removed from the land.

After walking in to the farm church and hearing Lady’s reminiscence of how much seems to have improved in the chapel, the farmer’s daughter tenses up and threatens to have the intruder arrested for trespassing. This sets off an intense, if at times ludicrous, exchange between the two women.

There are obvious commonalities the women share over their lot in a patriarchal society. These similarities provide some of the more comedic moments in the play, which serve to release the tension offered by the terse exchanges in other parts of the story. Some of the humour also comes by way of humiliation, an exploration of the lived experiences of the farm workers.

The third performer in the piece is mostly mute. He is the church’s organist and thus the doormat to the farmer’s daughter’s whims, which include fetching water for their unexpected visitor and playing tunes on cue to soothe her pervasive paranoia about the unfolding events.

The role women played in wars fought in service of male supremacy is in sharp focus, along with how this continues to shape their understanding of who they are in society.

The device used to unpack this in greater detail is the switch from dialogue to monologue, which happens instantaneously. This enhances the pacing of the production, as the actors handle this switch quite effortlessly.

But the story is not only concerned with exploring these similarities at face value.

After a series of shared tears, when it appears the women may have broken the glaciers of ice between them, the white woman, reffered to as Missy, makes the blunder of sympathetically offering her newfound counterpart a possible job on her father’s farm, situated on land the Lady’s family used to own. It is here that the impossibility of their budding acquaintance is revealed.

The Dying Screams of the Moon is an apt metaphor for South African life but some aspects of the story seem anachronistic.

The iterations of our collective past are well worn and in dire need of a new way of retelling. If we are to learn something new about the persistent symbols of the past and their intrinsic symbiosis to the realities of the present, then our pens have to depict a more engaging understanding of this moment.

While the story seems to express a stalemate, the onus to advance this to a more beneficial place is placed on the individuals irreparably broken rather than to systems already put in check to mitigate this.

The younger people in the audience seemed to only come alive (in the form of finger snaps) when the tenor of the play changed and the discussion turned into a frank exploration of what Lady’s actual business on the farm was. This signified a generational impatience with the language and tropes so entrenched in our theatre traditions.

Although the director-writer duo of Kani and Mda seem aware of them, they do not step so far into the present as to subvert them.