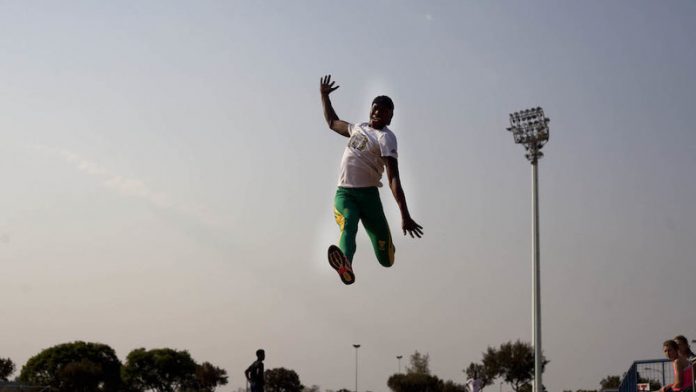 Sitting not far apart in economy class on an aircraft bound for Canada six years ago were two singular young South African athletes. They were part of a far larger travelling group and in subsequent years their stars would arc away from each other in profoundly different directions.

But on that early July day they touched down in the New Brunswick town of Moncton as brothers, eager as tomcats to show the athletics world what they could do.

A week after jetting in and Luvo Manyonga would win gold in the men’s long jump of the 2010 World Junior Championships with a characteristically casual jump inching just under 8m.

Sitting close to him on the flight to Canada was a talented sprinter from Bloemfontein by the name of Wayde van Niekerk. But to discover his slightly longer signature event of 400m, Van Niekerk wouldn’t fare quite as well in Moncton, finishing fourth in the 200m final behind a Japanese athlete, a Belarussian and a Canadian, missing the bronze medal by two hundredths of a second. Close but no koeksister.

Although the money and comparative notoriety of Manyonga’s gold medal went to his head, initiating a dizzy downward spiral that played itself out over several years, Van Niekerk’s fourth place pricked the interest of “Tannie Ans” Botha, the long-time University of the Free State’s athletics coach.

Calmly experienced to the point of unflappability, Botha saw enough in Van Niekerk to suggest she was witnessing the heady gifts of a once-in-a-lifetime athlete. She was honour-bound to act.

Soon afterwards, Van Niekerk enrolled at Botha’s university, and so began a gradually steepening training regime. Botha sat down with Van Niekerk and his parents, Wayne and Odessa, herself a gifted sprinter who competed under the South African Council on Sport banner, and planned a path to higher things.

Every stride Van Niekerk ran from then on would be watched, analysed and filed away as the four prepared a stealthy assault on the future.

Manyonga, meanwhile, started a long walk backwards, frittering away his Moncton riches on cars and drugs. The older of the two young men by 18 months, the long-jumper’s easy elegance could not indemnify him against the treacheries and hidden obstacles of everyday life.

Whereas Van Niekerk had institutional and domestic support, Manyonga was surrounded by hyenas rather than love. A fifth place in the men’s long jump at Daegu, South Korea, in the World Championships of 2011 was as good as it got for a young athlete with stardust on the soles of his spikes.

In thrall to an increasingly disruptive tik habit, Manyonga qualified for neither the London Olympics nor the Commonwealth Games in Glasgow two years later (indeed, he was seen as a public relations time bomb by the South African Sports Confederation and Olympic Committee and was pointedly ignored for Glasgow on a technicality).

Had it not been for an iconoclastic Irishman called John McGrath, a man who was not prepared to accept the wisdom that a tik addict from the gangland-infested townships of Mbekweni outside of Paarl is as good as dead, he would not have made the flight to Rio at all.

By strength of will and an uncanny ability to see Manyonga’s potential greatness, McGrath, a strongman and former Coney Island performer, literally bent Manyonga back towards health and life.

“It’s stark – Luvo either jumps or dies,” McGrath told the Mail & Guardian a year ago, before adding recently: “I heard all about Luvo on the grapevine because the sporting community in Paarl is actually quite small but nothing could have prepared me for the careless grace of this kid. When he jumps, it’s just magic.”

After several initiatives and months of trying, just over a year ago Manyonga was offered a place at the High Performance Centre (HPC) at Pretoria University. Last weekend, McGrath, a father figure, former conditioning coach and mentor, flew from his home in Paarl to say goodbye before the South African Olympic team’s departure for Rio.

He met the architect of the HPC dream, a visionary technocrat called Toby Sutcliffe, and enthused about the mental “space” his former protégé appears to be in. “It was all in his eyes – they were shining brightly,” says McGrath. “He was content and peaceful, looking immensely forward to Rio. He’s looking mean and sharp and, look, you never know, he might just spring one of the surprises of the Games.”

Manyonga’s career has proceeded in an agony of fits and starts, but Van Niekerk’s has rocketed since his fourth place in Moncton six years ago. Initially the rise was gradual, but, swaddled in Botha’s forthright care, the past few years have seen him shoot out the lights, emerging as a potential athletics great, someone who in future years will be talked about in the same breath as Michael Johnson, Butch Reynolds and Jeremy Wariner.

He has been helped by a fine genetic inheritance from his mother and the kind of everyday emotional support that, until recently, was notably absent from Manyonga’s life.

This has led observers like Cheryl Roberts, the sports activist and former Olympian, to proclaim Van Niekerk’s achievements as a form of political and spiritual retribution for his mother’s suffering and exclusion.

Vital with Van Niekerk has been his “graduation” to the 400m, a physically punishing event that demands nothing more than a flat-out sprint for a single loop of the track. After years of almost forensic care, Van Niekerk signalled that he was on the cusp of greatness last year at the World Championships in Beijing, where he won gold in the fourth-fastest 400m time ever recorded.

In second place was LaShawn Merritt, who kissed the tape slightly ahead of Kirani James of Grenada. Van Niekerk said at the time that he remembered James and his achievements from Moncton: “I was in the 200m but Kirani won the 400m in Canada. I realised then that I had it in me to make an impression in the longer event.”

Key with both Van Niekerk and Manyonga (in their different ways) is the idea that they have been exposed to what their respective disciplines have to offer in the six years between their Moncton touchdown in 2010 and today.

Therein lies a secret. Behind all the breathy bluster, the punditry and the false claims, those who have the best chance of success at Rio are the ones who have been gradually exposed to the rigours of international sport.

Left-field romance makes for a good story but it seldom turns out that someone comparatively unheard-of wins medals with a barnstorming swim or run. That’s why, in the LJ van Zyls and Anaso Jobodwanas, South Africa has its best chance of medals on the track besides those of Van Niekerk and – possibly – Manyonga.

McGrath, the man who has done more than any other in this country to see Manyonga on to the Rio-bound plane, won’t be able to see any of it. His strongman antics have finally got the better of him and he’s off to hospital for a back operation. From now on, Manyonga flies all by himself.