The acquittal of Zuma did not just endanger Khwezi’s life, but ours as well 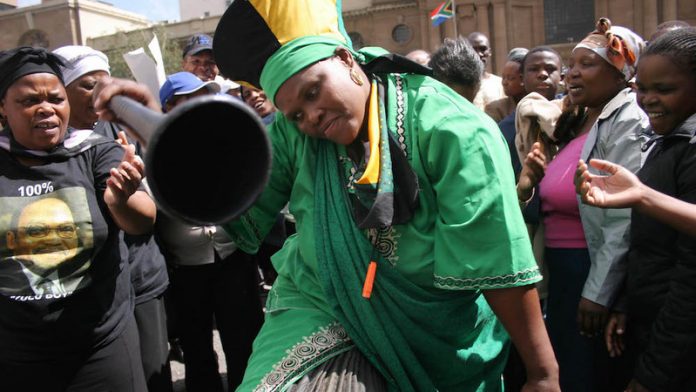 Women’s Month is here – a time when everyone has 24 hours to convince themselves that women may actually exist, and for adverts to suddenly peg everything on “the softer sex”. The Women’s Month is also the 10-year anniversary of one particular poster boy’s rape trial acquittal.

It has been a decade since Jacob Zuma walked out of the Johannesburg high court a free man, his rape trial over, and continuing his journey to the highest office in the land. He had claimed, during the trial, that wearing a kanga was an invitation to have sex. The trial itself and the act of group-forgetting that followed shows how scary ideas of sexual assault have settled comfortably in the public psyche.

During the trial, the woman who became known by her pseudonym Khwezi was vilified by Zuma supporters. There were calls to “Burn the bitch”, and her photo was circulated outside the courts. Eventually she was forced to leave the country under police guard, forced out of the very space in which her rights were supposed to be protected. She was forced to become a refugee in another country, while Zuma went on to became the president of South Africa.

Fast forward, through #PayBackTheMoney and #ZumaMustFall, and it’s clear that the nation forgot and forgot again.

This collective amnesia does not, however, extend to all. The 1in9 Campaign, an organisation that originally started in 2006 to support Khwezi, recently held a series of exhibitions as a form of protest, outside the Johannesburg court that had ruled the incident between Zuma and Khwezi to have been consensual.

Based on the notion that “My kanga is not an invitation” and the right to women’s bodily autonomy, the collective sought to highlight this specific, sad and disturbing moment in the nation’s history, we well as the failings of the criminal justice system. The 1in9 Campaign closed off Pritchard Street and held a series of demonstrations in front of the court there, including a performance piece in which women bared their bodies and then covered them in kangas.

Mpumi Mathabela, coordinator of the protest campaign, said that “during a dialogue we hosted on the eve of the 10th anniversary of the judgment, we had women in the room who said that because Jacob Zuma told the nation that he showered to avoid becoming infected with HIV, men began raping us without condoms”. Women there said Zuma’s acquittal had actually caused a surge in rapes in communities because men felt “the justice system was on their side”.

If those in most power set an example for the rest of us, this trial entrenched dangerous precedents. No amount of women’s marches, Women’s Month themed sales and articles about how women are captains of industry, change-makers and/or the new black will change the fact that it is still very clear who has access to women’s bodies.

We are very far from a time when women can safely be all the things for which we are celebrated during Women’s Month. It shows that inflated high levels of political representation for women and formal structures to protect our rights won’t, in fact, be our saviours when it comes to bodily autonomy. Sometimes these structures are our greatest threat. It is difficult to feel safe when the bogeyman may not only hold the keys to the city but to your bedroom door as well.

Rapists who prey on the mentally ill